New
Home / Features / Water Series: ‘There’s no law in the world that says you can cut water from humans’

Water Series: ‘There’s no law in the world that says you can cut water from humans’ 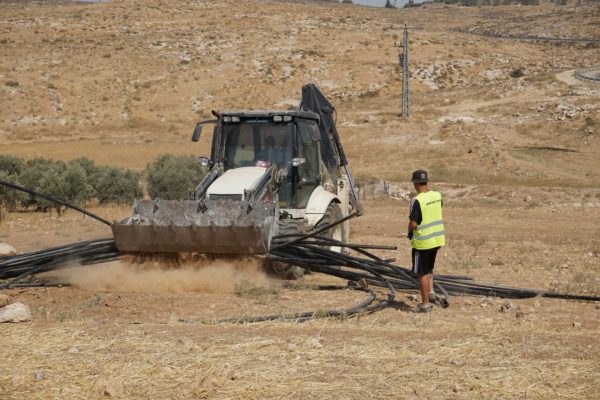 This is the second of a series of reports documenting the control and devastation of water sources by Israel as a tool of oppression.

Israel is escalating its war on water in the South Hebron Hills, demolishing wells, ripping out kilometres of pipeline and even confiscating trucks carrying emergency water tanks to parched villages.

In the sweltering month of July, five demolitions targeting water infrastructure were carried out, leaving Palestinian farming villages without access to water.

The latest took place on Wednesday July 31, when the Israeli Civil Administration – the body that governs Area C in the West Bank – cut pipes supplying water to houses and farmland in the area of al-Jaway near At-Tuwani. 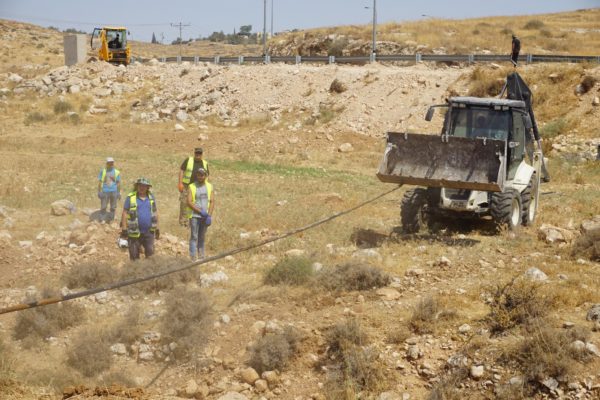 Tariq Hathaleen, a local activist from the South Hebron Hills, says that the number of demolitions on water sources has “more than doubled,” this year compared to previous years.

He told ISM: “Now in the summer it sounds like the Civil Administration has a plan to restrict Palestinian access to water in the South Hebron Hills, in Area C in general, and that’s actually to put more pressure on those people to move them away from those villages.

“Because the Civil Administration don’t have a direct excuse to expel those people from their land but the plan is to put more pressure to make them leave by cutting their water sources.”

On July 4, bulldozers destroyed three water wells outside the town of Dkeika, a day after they came to the same area and uprooted over 500 olive trees. 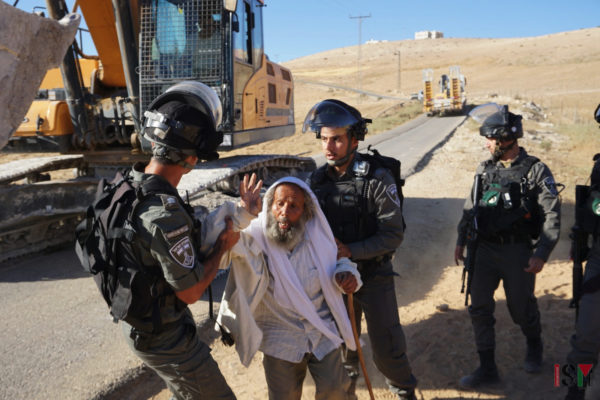 The destruction of the wells and trees have affected around 1,200 people, 60 per cent of them registered as refugees. according to the UN’s Office for the Coordination of Humanitarian Affairs (OCHA).

“I know the reality of these people,” Tariq, who was at the demolition, adds. “I call them the enemies of life and they prove this by cutting trees, by cutting water pipes, by cutting the lives of people.”

The Good Shepherd Collective, a group that advocates human rights predominantly in the South Hebron Hills, puts the escalation of demolitions down to the actions of far-right settler NGO Regavim.

Regavim, which receives Israeli tax-payers money and has charitable status, spies on Palestinian communities, looking out for structures built without a permit and reporting them to the ICA. They then speed up demolition cases in the courts through petitions.

Their devastating impact can be seen by the steep rise in demolitions in the South Hebron Hills; 65 structures have been bulldozed or confiscated so far this year, compared to 23 structures in the same period last year, according to OCHA. 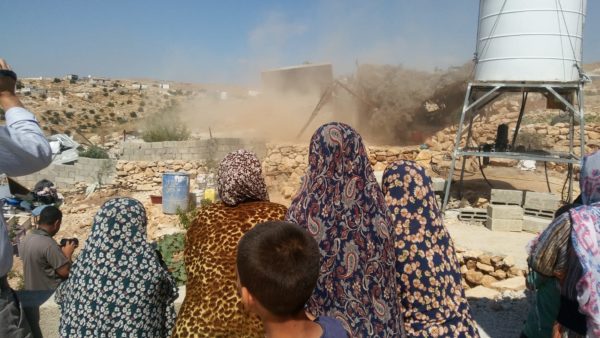 “For anyone who still has qualms about the placement of blame on the state or Civil Administration for the act of demolitions, the message of these continued demolitions in natural areas should serve as a clarifying message,” the Good Shepherd Collective said.

“The state, the settlers and the organizations like Regavim that push forward the destruction of these areas, structures and resources for Palestinians are not motivated by the preservation of humanitarian rights, environmental laws, or the protection of the natural environment.”

The series of attacks on water sources in July comes after Israel ripped out a huge pipe network earlier this year that had supplied 12 Palestinian towns in the South Hebron Hills with running water.

The pipes were built in secret and took four months to install. But just six months later, Israel destroyed them, cutting the 20km lifeline.

The 12 villages have had to return to the old method of accessing water – by transporting tanks on tractors along poor roads which wears down the tyres and wastes precious work days.

Transporting water in this way adds to the economic burden of the area’s small villages, costing 30 shekkles for one cubic metre. In contrast Israelis pay just 8 shekkles per cubic metre.

And even the trucks are not safe from Israel’s war on water; on July 15, 18 water tanks were confiscated by Israeli soldiers. In the same raid, several thousand dollars of water pipeline and drilling equipment to install the pipes were also taken.

“The feeling is hard to accept, the fact that those people, those humans out of blood and flesh agree on themselves to cut other peoples’ lives by cutting the water,” Tariq tells ISM.

“It’s far from doing something legal. There’s no law in the world that says you can cut water from humans and forbid him from having water access. Its insane.”

A bulldozer destorys water wells while a Regavim drone hovers above

The South Hebron Hills is in Area C of the West Bank which means it is under full Israeli control. Palestinians in this region are denied building permits even to install water pipelines or wells, and are not allowed to hook up to the water network that Israel has laid across Palestinian land to supply illegal settlements.

As a result, villages in the area are subject to unrelenting attacks on not only their water sources but farmland and homes.