UPDATE: Bassem Tamimi, Ahed’s father, has also been arrested by Israeli occupation forces as he went to the court where his daughter and wife are held.

No break for the kid-targeted repressive operation of the Israeli forces. Tonight soldiers raided Nabi Saleh and arrested Ahed Tamimi. Since years, the village has been the scene for many protests against Halamish illegal settlement, whichs’ construction led to land confiscation and theft of water from the local spring belonging to the Palestinians. During the years this little village echoed the Palestinian struggle all over the world.

16-year old Ahed has often appeared in videos where she is seen facing Israeli military during protests. On the 18th of december, when soldiers shot 14-year old Mohammed Tamimi, in the face with a rubber coated steel bullet (still treated in a medically-induced coma in the hospital), she stood in front of the entrance pushing the Israeli soldiers back trying to keep them out. The video has been used by the Zionist press as a mean of propaganda to show the kindness and the courtesy of the soldiers as a contrary to the ‘violence’ of Ahed. Of course, the blocking action costed her the arrest. This morning at 4 the Israeli armed forces stole the families cameras and telephone, beat the son up, and arrested Ahed. No explanation has been provided about the case. 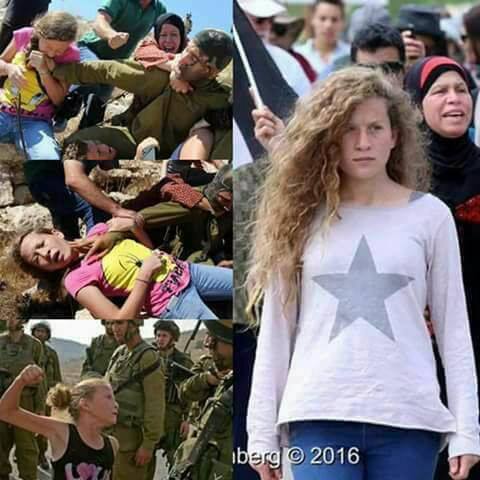 Furthermore, later in the morning, when her
mother Nariman went to Benjamin police station to ask for the daughter and the charges, the Israeli army reponse was to arrest her. The family still do not know anything about the evolution of the situation.

Meanwhile, this afternoon, Israeli soldiers kept on shooting tear gas and rubber coated steel bullets at people protesting at the checkpoint at the entrance of the village.

Nabi Saleh, is a village in the occupied West Bank of only 530 residents, the villagers have protested since 2009 against the occupation and the illegal settlements on their land. 2 protesters were killed during these protests. One of them is Neriman’s brother Rushdi whi was lethally shot by Israeli soldiers on the 17th November 2012, he died from his wounds. The other Mustafa Tamimi was Neriman’s cousin was murdered on December 201114 year old Mohammed Tamimi was shot from close range in the face on the December 2017 and , remains in critical condition. Aljazeera.com

On the 21 November 2014 Nariman Tamimi was shot with live ammunition her femor was shattered and reconstructed in surgery. palsolidarity.org

Nariman Tamimi is a mother of four studied international law. Her daughter Ahed Tamimi has become a known face because of her courage standing up against soldiers. On Friday 28/08/2015 during another one of the protest marches in the village, a soldiers got hold of 12 year old Mohamed Tamimi who was treated for an injury to his wrist just 2 days before. Nariman Tamimi and Ahed managed to get him out of the hold of the soldier. Miri Regev said that the unarmed protesters should have been shot. mondowiess.net

Arrests of children as young of 12 by the occupation are no exception. More than 700 Palestinian children are imprisoned in Israeli jails each year, this number does not include children who are arrested for a few hours. Stone throwing charges often lead to jail sentences between 2 and 6 months with lawyers advising children to plead guilty since release on bail is hardly ever allowed and the time for the appeal often exceeds 6 months. Arrest is always a frightening experience for children of any age and even more so because during arrest and interrogation they are not accompanied by their parents or even a lawyer and even while serving prison sentences their parents are not allowed to visit.

Tagged with: An Nabi Saleh Prisoner