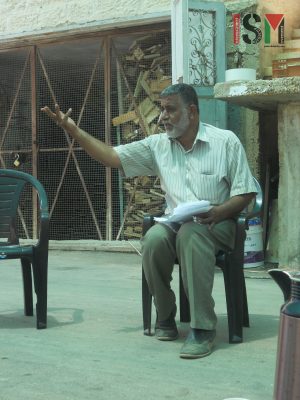 The difficult situation of Beit Ummar, from Abdullah’s point of view

Ealier today we visited Abdullah Braigheith, a 54 year old farmer, who with his family are facing the risk of getting their agricultural water tank demolished, any day from now. This is their livelihood, without the water for crops they will lose their income. Abdullah and his brother already had to cut down on their production this year; they went from planting 30 dunums* last year to only 5 dunums this year. This leaves the family facing severe economic problems, and the father can’t pay for his kids’ education in university. They are now fearing losing around 3000 dunums of their land, because the settlers want to connect the settlements Gush Etzion and Beit Al­Barakeh to make one settlement. Even though they are surrounded by settlements from all sides, they will not leave their land. This is not only due to the fact that they will lose their income, but the land is also their pride and identity.

Thirty five of the family’s apricot trees were cut down by the settlers. The family filed a complaint to the Israeli police, who did nothing to help. Afterwards, the settlers took revenge by setting three of their tractors on fire.

The family went to the Israeli military, who told them to file a complaint. Abdullah asked the military for a video of what happened, since there are military cameras all over the area. The soldiers refused to let them even see the video, because of ”security reasons”. The purpose of the cameras is not to protect people like Abdullah and his family, but instead the settlers who attack them and their property.

The family were not able a complaint since the soldiers did not allow them to see evidence that would make such an action possible. According to Abdullah Braigheith, using Israeli military courts to get justice is futile because the courts are set up to protect the victimizers, not the people who are wronged.

“It’s their own court, we can do nothing about it”, Abdullah said.

About one year ago, four water tanks were built in Beit Ummar, a project to develop Palestinian water resources and agricultural lands in the West Bank. It was built with funding from the European Union, USAID, UAWC and other NGOs without permission from the Israeli authorities, because they knew that they most likely would not get a permit to built them if they did. Usually they would not receive demolition orders, but they all did, and the farmers, including Abdullah Braigheith, have all been going in and of court since. This meaning that they are now not only dealing with a huge water shortage and harassment from settlers, but are now also using huge amounts of money in court. The fact that even projects like this, funded by the European Union and other NGOs, are under demolition orders, shows how impossible it is for the people living in Beit Ummar and the rest of the West Bank to receive help.

Since the Oslo Accords in 1995, Beit Ummar was put in the calegory which covers 60 % of the West Bank, called Area C, which is completely under Israeli civil military control. In these areas, Israeli settlers have higher privileges which are at the expense of the Palestinian population here. This is clear when you look at the fields in Beit Ummar, where Palestinian farmers are either not able to actually use most of their land, or their plants are dying because of the shortage of water.

Close by, you see the settlers’ fields which are green. The difference is very clear.

*B’tselem, The Gap in Water Consumption Between Palestinians and Israelis, (2007). Available from: http://www.btselem.org/english/Water/Consumption_Gap.asp. 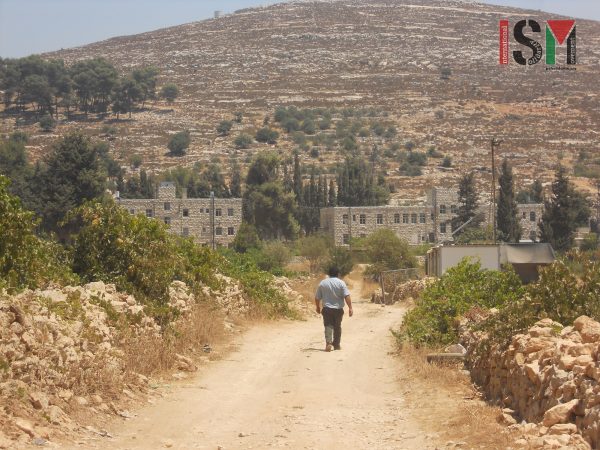 One of the settlements; Beit Al-Barakeh, right next to Abdullah’s land. 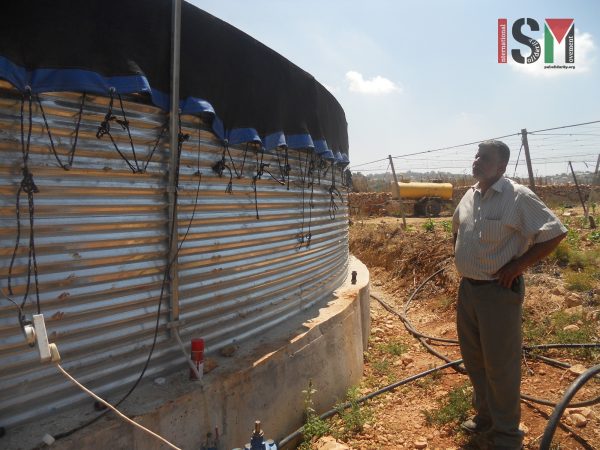 Abdullah looking at one of the many dry fields