On the morning of August 9, 2016, ten Israeli military jeeps each filled with five soldiers, arrived in the village of Umm Khaeyr. It was 6:30, and most people were still in bed. The soldiers made the people sit down, and did not let them move.

Then they destroyed six houses, three of which were built with funding by the European Union.
According to Bilal, one of the villagers who took us around, the homes were destroyed for allegedly having been built without permits. Palestinians in Area C of the West Bank are very rarely given permission to build homes, even though it is in their own land.

One of the houses was inhabited by an elderly woman and her children. They now live in a shack.

Shockingly, one of the homes had an EU sticker on it, it could not have been more clear that it was built with international assistance.

According to Bilal, the commander told him “everywhere I see this paper, I will demolish without reason”.

As traumatic as this demolition was for the community, it was not the only one they experienced. Such actions are terrible at any point in time, but especially during the winter, when it is cold outside.

One winter, Bilal asked the soldiers how will the women and children whom they made homeless survive.

The answer he heard was short and cruel.

“It is not our business”.

Bilal’s own house had been demolished two years ago.

Fuming, he told us “I worked for this house. The settlers are paid to live here”.

Israeli soldiers not only demolish people’s homes, but also last year destroyed an oven that the villagers use to make bread.

Umm Khaeyr is literally only meters away from the settlement of Carmel. We could see the homes just beside us, most of them nice looking buildings with red roofs. Most were in an area that is surrounded by barbed wire.

He described another incident when they came down from the settlement, and beat up some women- then accused the women of assaulting them. Fortunately, the villagers had a camera with them and filmed what took place. The soldiers released the women- and the settlers, although there was video evidence showing them committing assault- and then fined the women one thousand shekels.

While in the village, we saw two army helicopters fly overhead, and later heard a loud BOOM far off in the distance. The village is evidently close to a military training ground. Bilal said that sometimes the choppers land very close to people in another village, and their propellers cause dust and dirt to fly everywhere, including on people whom they land close by.

Despite the demolitions and harassment that they face on a regular basis, neither Bilal or the other villagers plan to give up. They will in most likelihood try to rebuild, even though they know the structures will probably be knocked down again sooner than later. Even as we speak, many other of the buildings in the village- homes as well as buildings where animals are kept- have been given papers that state their demolition is imminent also.

However, they will not be chased away.

“I will stay here, I will not leave this area. This is my land”. 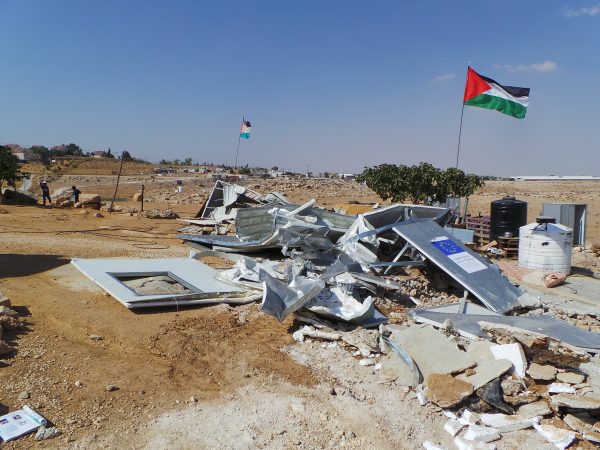 Palestinian flags fly over two of the homes that were demolished today by the Israeli military. 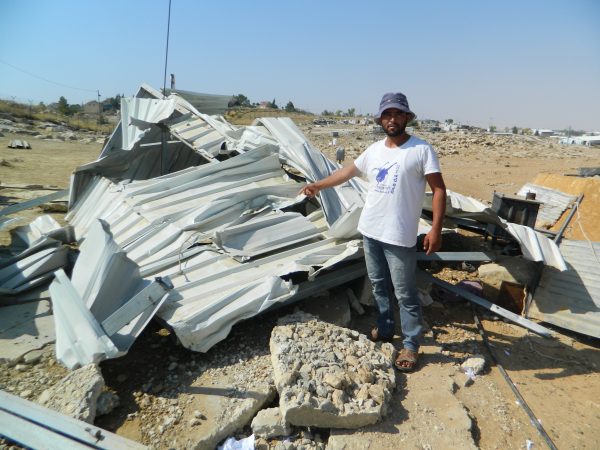 Bilal points to the ruins that used to be a home of a family until this morning, when bulldozers came and knocked it down.