On 5th June, the holy month of Ramadan started. In occupied al-Khalil (Hebron), the Old City, that till then had been mainly deserted, comes back to life as many stream towards Ibrahimi mosque for prayers.

When trying to avoid this checkpoint, there’s only two options: either walking a long-detour up the hill and then down on the other side, far past the checkpoint; or to take a service-taxi that will drop passengers close to yet another checkpoint, the Queitun or Abu Sneneh checkpoint, that has recently been ‘upgraded’ to include a box where anyone passing inside the checkpoint won’t be seen from outside.

With the advent of Ramadan, many Palestinians now stroll through the market in the Old City to buy groceries or anything else needed in the house, with even more shops opened and prices low for Ramadan. After months of the Old City market resembling more and more a Ghost Street – just like Shuhada Street after it’s forst closure and complete prohibition for Palestinians – it now finally is busy again with Palestinians. The atmosphere during Ramadan is peaceful, and Palestinians pass the Ibrahimi mosque checkpoint for prayers in Ibrahimi mosque. 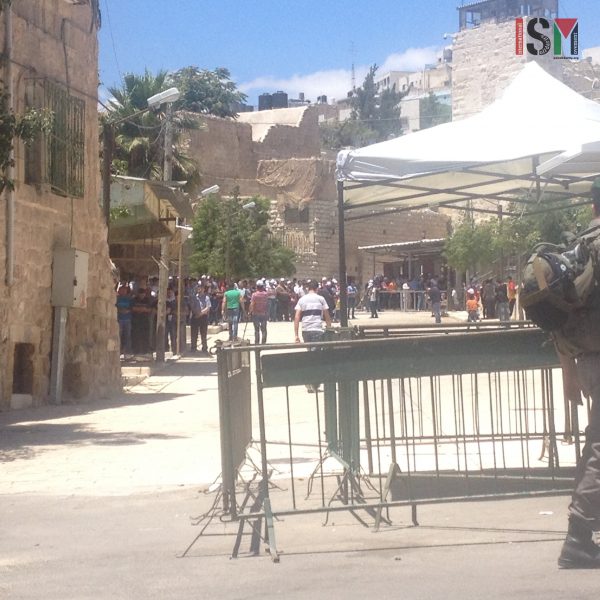 Especially on Friday, large crowds of Palestinians flocked to Ibrahimi mosque for prayers, so many that some of them had to pray outside the mosque. Despite the heavy Israeli forces presence, the majority of the worshippers was allowed to pass the checkpoints without major delays or denials of entry. Again, after months of detentions at checkpoints on the way to prayer and arbitrary detentions, this is only a slight relief from every-day harassment. On the way to prayer, to exercise their freedom of religion, Palestinians still have to cross various military checkpoints – just to pray inside Ibrahimi mosque.

Watch a video of how these checkpoints look like for Palestinians (video credit: Christian Peacemaker Teams Palestine).