Yesterday, Elor Azraya, a soldier in the Israeli army, infamous for the extrajudicial execution of Abed al-Fattah al-Sharif in occupied al-Khalil (Hebron), has been released to celebrate the Jewish holiday of Pessach with his family.

21-year old Abed al-Fattah al-Sharif was lying on the ground incapacitated after what Israeli forces claim was a knife-attack by him and Ramzi al-Qasrawi against Israeli soldiers stationed at Gilbert checkpoint in the Tel Rumeida neighbourhood of occupied al-Khalil. In a video that was captured by human rights defender Emad Abu Shamsiyyah, who has since been receiving death threats from settlers, Elor Azraya can be seen cocking his gun and executing the unconscious Abed al-Fattah with a shot in the head. With blood and brain matter starting to seep from the wound in his head, it is obvious that Abed al-Fattah was still alive when executed in cold-blood by Elor Azraya.

*** WARNING*** the following video contains extremely graphic material. A soldier is seen executing one of the Palestinian men at 1:52.  Video-credit: Emad Abu Shamsiya

The neighbourhood of Tel Rumeida and the tiny strip of Shuhada Street where Palestinians are still ‘allowed’ to walk after the 1994 Ibrahimi mosque massacre, have been declared a ‘closed military zone’ since 1st November 2015 in an act of collective punishment against the whole Palestinian population. The increase of humiliating and racist ‘security-controls’ towards only the Palestinian residents by Israeli forces, goes hand in hand with the dehumanization of these residents with the introduction of a number system, where every Palestinian resident was assigned a number that he or she is being referred to. When passing and being checked at one of the countless checkpoints whether a Palestinian resident is allowed to enter, soldiers check whether they are registered and numbered residents. At the same time, Israeli settlers from the illegal settlements are allowed to freely and without hassle, roam the streets, regardless of whether they actually are residents in this area.

The approval and support Elor Azraya has been receiving both from his comrades (that can be seen in the video with them not even flinching when he executes Abed al-Fattah) and settlers, mirrors the great support he enjoys from the majority of the Israeli population. Upon arriving home, Elor Azraya was received as a hero with a big celebration. The Israeli army clearly foster a culture where extrajudicial executions and an excessive use of force against Palestinians is considered ‘commendable’, ‘normal’ and even ‘heroism’; which is approved of not only by Israeli politics, but also society, and is thus becoming an integral part of Israeli society. 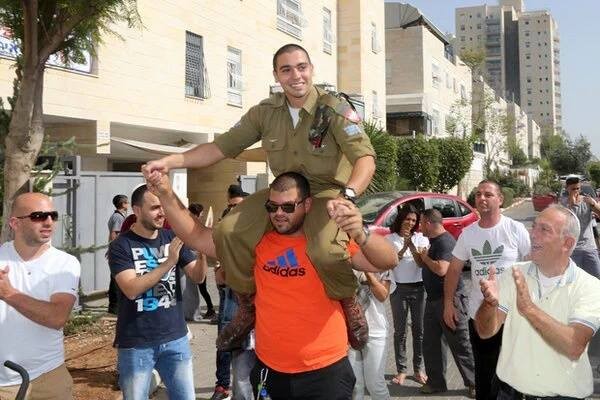 In various demonstrations in favour of this cold-blooded execution, Israeli demonstrators have been seen with placards asking to ‘kill them all’ – applauding not only the heinous execution of Abed al-Fattah, but calling on everyone to kill all the Palestinians – a clear call for the ethnic cleansing, and genocide, of Palestinians. These demonstrations have attracted hundreds of Israelis, and have not received any condemnation by the Israeli public or government. 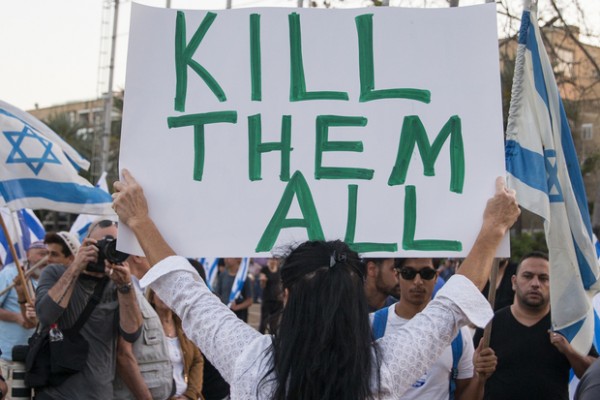 Banner calling for the erasure of the Palestinian people
Photo credit: AFP

Whereas Elor Azraya has been released until Sunday, the body of Abed al-Fattah is still being held by the Israeli government in a practice where the Israeli government holds hostage the bodies of Palestinians they accuse of attempting to harm Israeli forces or settlers. Like Abed al-Fattah al-Sharif, many more Palestinian familes are thus denied the right to bury their loved ones and mourn their loss. Families of these Palestinians and their supporters have been protesting this inhumane tactic, demanding the release of the bodies.

In an environment that supports and commands the extrajudicial killing of a (Palestinian) human being lying incapacitated on the ground – clearly posing no threat to anyone – it does not come as a big surprise that Elor Azraya has been released ‘to celebrate Pessach with his family’. The charges for the heinous murder of Abed al-Fattah had already been reduced to ‘manslaughter’, despite the telling and obvious video footage. His release without any consequence for the execution of a Palestinian so clearly caught on camera is not just another sign of how cold-blooded, racist and inhumane the apartheid Israeli occupation of Palestine is; but also of how the ‘only democracy in the Middle East’ visibly has no regard or rather a total disregard for human rights, the rule of law or even of human life – as long as it is Palestinian life.