On the afternoon of 21st April 2016, an Israeli settler ran down a Palestinian youth with his car, causing critical injuries, near the Ibrahimi mosque in occupied al-Khalil (Hebron).

Two settlers were driving down the road connecting Shuhada Street and Kiryat Arba in occupied al-Khalil around 2 pm, and, seeing a group of Palestinian children playing on a parking lot bordering the street, turned around and deliberately hit Ala’a al-Rajabi with their car. The children that have been playing with Ala’a before the incident said that they were attacked by these two settlers several times before, and the last time were pepper-sprayed by the settlers that threatened them. According to eye-witnesses, the soldiers at a nearby checkpoint were merely watching and even allowed the two young settlers to attempt to drive off, before a group of Palestinians went up to the checkpoint to ‘inform’ the soldiers of what happened. The injured 17-year old boy, having been hit whilst on his bicycle, was lying on the ground bleeding from his legs and head for about 15 minutes, before any medical help was given to him. 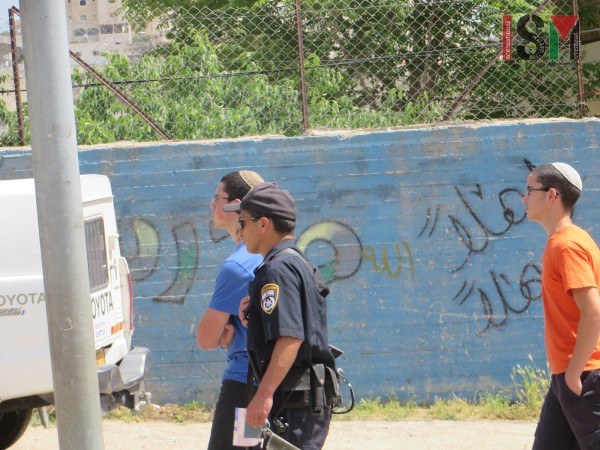 A Palestinian ambulance was allowed to evacuate the youth, now in a critical condition, to a hospital. Big groups of settlers gathered, while more and more soldiers as well as civil police arrived. According to several eye-witnesses, a settler youth wearing an orange T-Shirt was driving the car, whilst another settler youth wearing a blue T-Shirt was in the passenger seat. After the police arrived and a discussion with the two settlers was had, however, it was claimed that it had been the settler with the blue T-shirt that was driving the car. Observers believe the reason for this to be that the settler driving the car did not in fact have a driving licence, whereas the passenger did. Regardless, the settler said by the police to have been driving, was seen walking free from the police station at Ibrahimi mosque, only an hour after the initial incident. 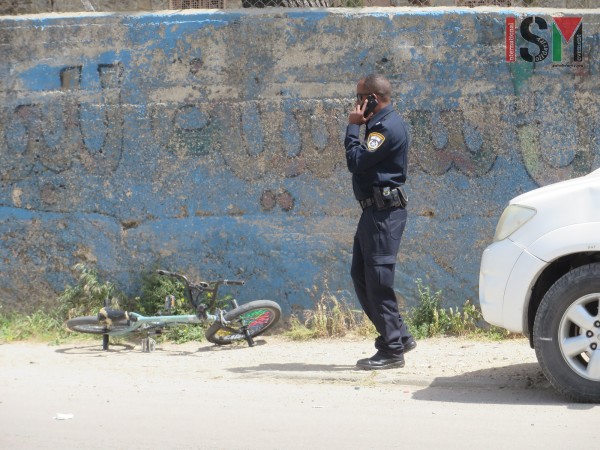 Police man next to the bicycle Ala’a was hit on

The street where the settlers ran down Ala’a connects the illegal downtown settlements on Shuhada Street and in Tel Rumeida directly with the illegal settlement of Kiryat Arba on the outskirts of al-Khalil. Palestinians are prohibited from driving anywhere on this road, an apartheid rule that covers all traffic, including ambulances. Ala’a therefore was lucky that the Israeli forces did coordinate to allow a Palestinian ambulance to drive in to the area as quickly as they did.

The stretch of street where Palestinian traffic is completely barred includes Shuhada Street – the major part of which is entirely off limits for Palestinians. A small part of Shuhada Street is still accessible for Palestinians on foot, but has been under a ‘closed military zone’ order since 1st November 2015. Only Palestinian residents registered as a number are allowed to pass and international visitors are completely barred. Settlers, however, can freely roam the streets. This a part of the Israeli forces’ policy of slowly but steadily driving Palestinians out of these areas, with a view to connecting all the illegal settlements as well as disappearing the last remaining Palestinians from these areas.