Rani Burnat is an extraordinary human being in more ways than one. He was left paralysed from an injury sustained during the second intifada, learned to live the remainder of his life in a wheelchair, fathered three children (triplets) and now continues to resist the occupation through peaceful means to this day. His story is inspiring and a prime example of the will of the Palestinian people and their ongoing resistance to an illegal occupation. 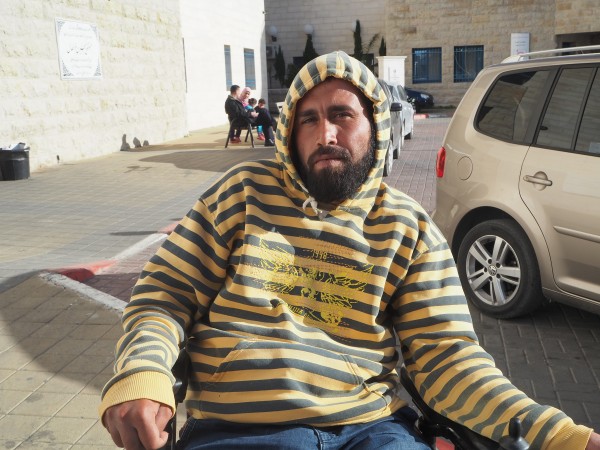 On the 30th September 2000, Rani Burnat was going to Ramallah from his home town of Bil’in for a driving lesson. When he got there he noticed a protest gathering to protest Ariel Sharon’s entry into the sacred Al-Aqsa mosque (this of course was the beginning of the second intifada). Rani spotted friends of his from Bil’in and with time to spare decided to join in.

As the protest gathered the Israeli army illegally entered the  Ramallah area and cleared the guests out of a nearby hotel, then used the hotel roof as a vantage point and placed snipers. The Israeli military claims that their illegal entry onto Palestinian land was to protect a nearby illegal Israeli settlement that the protest was nearing.

Rani and fellow friends were at the front of the protest when a sniper opened fire using a unique bullet, known as a butterfly bullet, designed to continue spinning upon impact while opening out and inflicting massive damage upon entry and exit.

The bullet entered through the left-hand side of Rani’s neck, puncturing his main artery. It continued through to the right hand side of his body, severing his spinal chord between the third and fourth vertebrae on exit.

As sniper fire continued and pandemonium erupted, Rani was left bleeding on the ground. Fortunately fellow bystanders assisted by applying pressure to the wound on his neck to limit the massive amounts of blood that he was losing. He was then put into a car and driven to the nearby hospital where he was promptly seen by doctors. Rani was the first victim of the second intifada to be treated.  Anyone coming into hospital later in the intifada with his severe wounds would undoubtedly have died as staff and resources failed to cope with the influx of wounded.

The doctors applied a stint to Rani’s neck to where the artery had been severed, which remains to this day. He was put into an induced coma for two days, during which time doctors concluded that with the facilities they had they could not  keep Rani alive along with the massive numbers of victims that were now being admitted to the hospital as the second intifada  intensified.

It was decided that Rani must be transferred to another hospital  with more facilities, one cable of taking care of someone in such a serious condition, the only hospital possible was in Jordan. Given his condition he could not make the journey by land and so a helicopter was arranged from the rooftop of the parliament building in Ramallah.

On admission to hospital in Jordan, his loss of blood was so great that he required massive blood donations from a number of donors. Rani would spend the next seven months in that hospital undergoing operations and combatting repeated infections. He says ‘The most important thing for me at that time was that I was alive. The doctors in Jordan made this possible”.

After seven months in Jordan, Rani was able to come back to Palestine for rehabilitation, after a month first back at home in Bil’in seeing friends and family who had missed him, and whom he had missed so much in Jordan.

He then had to go back into hospital in Ramallah for another seven gruelling months of rehabilitation. It was during this time that the severity of his situation became clear to him. “It was an extremely difficult situation to come to terms with, that I would now have to spend the rest of my life in a wheelchair, paralysed on the right side of my body.” Rani is the oldest of ten siblings with four brothers and five sisters. He had wanted to be an electrician and he talks about  the helplessness he felt at that time. But despite this he added, “The personal pain I felt was nothing compared to the pain I was feeling for my family.”  However, a huge positive in Rani’s life amidst so much trauma was when he married shortly after the intifada and became father to triplets.

As time passed, Rani learned to deal with the injuries he had sustained, but one thing that he was not ready for was what happened in his home village next as the Israeli government began to illegally confiscate villagers’ land to construct the apartheid wall and enclose illegal settlements.

At this point Rani decided to become a photographic journalist so he could report on and show the world the ugly truths of the Israeli occupation and what it does to the Palestinian people.  He says he will only stop when he is dead or the occupation has ended.

Every week he is able, Rani makes the trip up the rocky road in his wheelchair, gas mask and camera at the ready. His wife worries for him every time he leaves but understands that this is what he must do. Rani himself admits that every Friday he leaves he fears he will not come home to his loving wife and children but he continues to go to show the world what is happening.

Fellow activists from Israel who come frequently to the Bil’in demonstrations have translated for Rani what the Israeli army is saying about him, things like “shoot the guy in the wheelchair” whilst laughing amongst themselves. Rani has been shot with rubber bullets, countless amounts of tear gas, had many cameras broken, two wheelchairs wrecked and has even been pulled out of his wheelchair and thrown onto the ground. “The occupying forces have no morals,” he adds.

Two months ago Rani was shot in the stomach with a foam bullet, which releases a liquid that burns the skin on impact. A month later he was shot in the knee cap and also singled out by soldiers and shot in both shoulders with tear gas canisters. Despite all this he continues moving forward.

In 2005 Rani organised a unique demonstration in Bil’in for all the people who have been injured or disabled since the second intifada. He explains that Israeli army used the most tear gas he has ever seen used, firing directly into the group of people, many of whom were restricted to wheelchairs, and causing many of them to pass out from tear gas inhalation including himself. “This is occupation” says Rani.

He doesn’t believe Israel can continue like this and he hopes an end is near, as do all Palestinians. Rani tells of how he wishes to be able to travel to Jenin with no checkpoints and how he wants to take his children to see the sea. Every Palestinian who has been suppressed by the occupation has their own particular dreams of life without Israeli occupation.

“Palestine is a state of peace, Israelis should be able to come and live harmoniously in peace – against occupation”.