Jamal, steadfastness and a death

Jamal is younger than I am but he doesn’t look it. He is always there, as are all the storekeepers in the souk and he always greets us, as does nearly everybody (walking down the souk when it is open can be a slow business). We walk through the souk several times a day to monitor tension at the mosque and at the checkpoints beyond them. 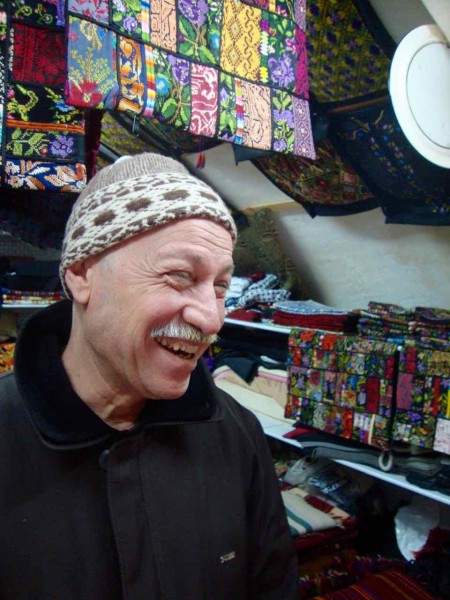 Jamal sells beautiful Palestinian embroideries, rugs and cushions, but nobody buys. I stay with him for an hour to do this interview, and unusually in that time he has one group of customers, tourists from France who have bought before, but they don’t buy today. He gets out all his rugs and explains how good they are. He asks nervously if they wouldn’t like to buy a small something today, but they don’t. I want to shake them but I don’t.

We settle down to a cup of ginger tea (no conversation conducted without tea or coffee) and he tells me that he has been coming here for forty-seven years, starting as a child after school and in the holidays. It is his father’s store. (I’m going to leave Jamal’s words in the good but slightly broken English that he speaks in his very soft voice.)   He has been here through all the troubles in Hebron.

‘I did watch the first intifada and the second intifada and now the third intifada. I did stay all that time and when settlers began occupying lands after the war in 1967, they start building settlements outside the city, and after that they move to the heart of the city you could say the 80s, inside the city, four settlements.’

That’s the situation we have now and that is what makes Hebron unique: four settlements in the heart of the old city, in Palestinian houses, with about 600 settlers living behind barbed wire and checkpoints, with between 1500 and 2000 armed Israeli soldiers stationed to ‘protect’ them from their Palestinian neighbours.

‘Number four the one it’s behind my store and on top of my store; it’s what they call Abraham Avino settlement. They built it on the main vegetable and fruit market. They occupied all these old houses above us, they rebuild them which is not their properties, they just took them, their owners did not sell them, they fight in court and they won the case but [the settlers] didn’t leave them.’

What this doesn’t convey is how close and how hostile the settlers are. They live literally above the shop, above a wire netting filled with rocks and rubbish which they throw from their windows: ‘We done it, we fix it as a kind of protection and sometimes that metal net won’t do any good as while you are standing they pour on you liquid such as dirty water, urine, rotten eggs, and all that happens in front of the soldiers’ eyes. On both sides there are watching towers, sometimes we do complain, we shout to the soldiers.’ The soldiers however do nothing. The soldiers do not do anything to protect Palestinians (or internationals) when settlers attack them and this happens often. They say it is a matter for the (Israeli) police but the police are never there.

I ask him how things used to be before the 1994 Massacre in the mosque that led to the obscene division of Hebron city centre into the two halves we have today. ‘It used to be crowded, active, so busy because you see the main city to produce this stuff [embroideries and rugs] is Hebron. Palestinians from all over used to come every day, even from the Gaza Strip, to buy their goods from here and to pray in the mosque and to leave late in the afternoon, and even internationals from the embassies from Ramallah and Jerusalem and Tel Aviv, they used to come at the weekends to buy their stuff. We used to make a lot of money, we had a nice business and good life, no trouble, no problem, no nothing.’

I queried him: really, even though the settlements had begun to make their presence felt? ‘The settlements when they came in the eighties they were small and it wasn’t like any trouble between Palestinians or settlers. It used be that a lot of settlers even they came from Kiryat Arba to buy fruit and vegetables.’

Then I ask him about the Oslo Accords, that set of negotiations and agreements from the 1990s to the 2000s which led to the setting up of the Palestinian Authority in the West Bank: that seemed to be a time of hope for many Palestinians, didn’t it? ‘People thought Oslo was good in a way.   It might help and sort problems and solve it.   We might have our own state. We were disappointed after that because they said at the beginning by the year 2000 all settlements in the heart of the city, they were going to leave them and to go and to live in Kiryat Arba, the main and the first and the biggest settlement outside the city.’

And why did it not happen? ‘Since that time the Israelis don’t want the peace process to go forward to let Palestinians have their own state, they don’t want it.   Americans and British and a lot of countries, they said to them stop building settlements; they ignore everyone; they are not listening to anyone, they don’t want to give us a state.’

Jamal is very clear about the Israeli strategy: ‘Life is so hard, difficult, tough. We don’t feel safe and secure down here from the army and the settlers, we are frightened they will open fire on us and shoot us. Look what they have done round the mosque: they have shot so many people, they want the area empty, they want people to be frightened and to leave the area. By shooting these kids they made it so frightening even I don’t go there.’

I am sitting here writing this as my fellow activist Jenny comes in with breakfast and tells us that someone was shot and killed ten minutes ago at one of the checkpoints, not the one that we just came back from, one that none of the internationals was at. This says two things to me: this is exactly what Jamal is saying. Every day, small things and big things. Every day, pressure to leave. And secondly, if I was ever unconvinced, standing for two hours at a checkpoint counting and watching, that my time is well spent, I am not now. This would not have happened if international observers had been there. I am sure of this. How can we be everywhere all the time?

There is already a funeral today. Now there will be another tomorrow, if the Israelis release the body. Muslims have to bury their dead the same or the next day. Three funerals last week. Funerals every week.

Jamal rejects violence for himself and his family. All that is left is sumud, steadfastness: ‘We are resistant, we are determined to stay, its hard for us to leave. It’s in our blood, it’s in our soul. To stay and to be patient. Here you have to live and to take this way of life because this is the way it goes, safe or not safe, peace or not peace, to me as a person I can’t do anything about it.’

I put my metaphorical pen down, sobered.