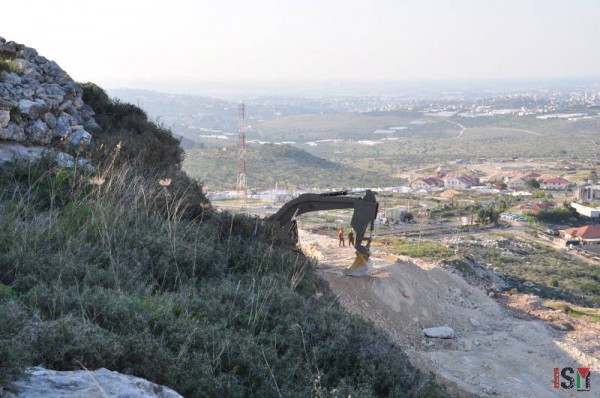 Bulldozer excavating the hillside. In the back sits the illegal Avne Hefez settlement.

Shufa village is very close to Avne Hefez, an illegal Israeli settlement that was established in 1987, which originally comprised 44 dunums of land. The settlement has continued expanding ever since and currently covers 3.000 dunums of land, all belonging to Palestinian villagers from the area. 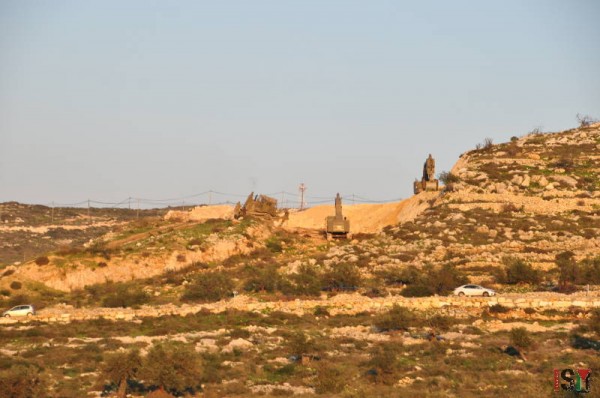 Another view of the excavation.

At the center lies the construction site. At far right sits the first house of Shufa and at far left, the first building of the Avne Hefez settlement. The road in the middle is for exclusive settler use.

Unlike most other villages in the West Bank, Shufa is located on top of a hill, while the Avne Hefez settlement is located at a lower point. Israeli bulldozers and excavators are now digging the side of the hill where Shufa is located, just a few hundred meters from the center of the village. The landowner hasn’t received any previous notice of the excavation, and what exactly the Israeli army intends to build is still not known.One assumption is that they are trying to connect both Avne Hefez and Enav settlements with a nearby illegal outpost. Villagers fear that Israel intends to create a big settlement block in the area, by connecting these three places. Since the construction site is located at the bottom of the hill, posing a strategic disadvantage for the Israelis, the residents of Shufa are afraid that the Israeli forces will use certain measures, typically on the pretext of ‘security’, to prevent Palestinians from accessing their farm land on that particular part of the hill in the future.

Palestinians living next to Avne Hefez are already facing a lot of difficulties. Farmers are not allowed to enter their farmlands located next to the illegal settlement if they don’t hold a special permit. Israel, in turn, hardly ever gives them these permits. In a more extreme example of the harassment that farmers have to face, the Israeli military recently demolished 4 greenhouse structures in a farm belonging to a villager of Kafa, as well as uprooting more than 100 trees.

In addition to all this, the villagers in Shufa are in desperate need of an increased water supply, in order to irrigate their farmlands. But Israel doesn’t let them finish a newly constructed water pipeline that starts in the nearby village of Esba Shufa, and is planned to go all the way to Shufa. The reason for Israel to stop this pipeline construction is that part of it is meant to go through the land area designated as Area C: the territory that comprises 60% of the West Bank and is under full Israeli control.  Residents of Shufa also mentioned that the neighboring village of Saffarin is facing worse water problems. They do not have a drinking water pipeline at all, and must buy water from surrounding Palestinian villages at double the normal price.Shufa is just a few minutes drive from Tulkarm. Since the 2nd intifada, Israeli forces have closed the road between Shufa and Tulkarm periodically, forcing the residents to make 32 km detours in order to get to Tulkarm. During a demonstration on Friday, December 18th, villagers from Shufa removed the illegal Israeli roadblock. Israeli commanders then promised that the road will be kept open. But until now, the road has remained closed most of the time. The few occasions when the soldiers open the road, they begin checking all ID-cards, allowing only residents of Shufa to pass through.