On Tuesday, 8th December 2015, a delegation from the United Nations visited the H2 area of occupied al-Khalil (Hebron), ahead of the international Human Rights Day on 10th December.

The UN-delegation visited the H2 area, under full Israeli control, to understand the situation and get first-hand accounts of the life under Israeli occupation and the daily fight of Palestinian residents and human rights defenders. During their visit, they talked to various local and international human rights defenders and visited flashpoint areas in al-Khalil, such as the ‘closed military zone‘ in the Tel Rumeida neighbourhood. The delegation also went to two areas where school-children have to struggle each day to get to school past checkpoints, the Israeli army shooting tear gas, illegal settlers attacking them; trying to take their right to education.

After the visit, the UN-delegation came up with a statement stressing the importance and praising the work of human rights defenders that are non-violently struggling to achieve the universal human rights for Palestinians, particularly in the environment of Israeli occupation. They are voicing their great concern about the Israeli forces crackdown on human rights defenders work and their attempts to silence them completely. 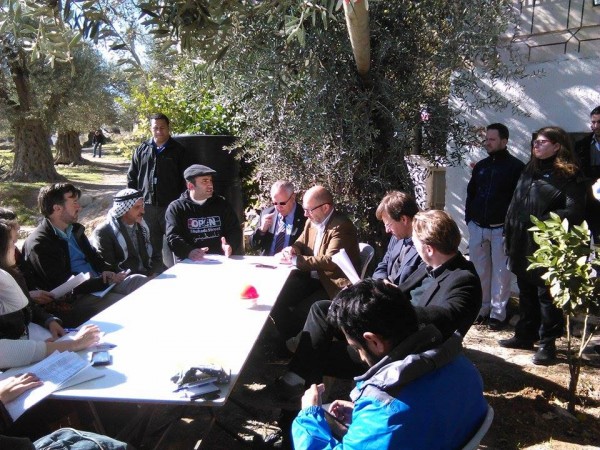 UN delegation in the Tel Rumeida neighbourhood of Hebron