New
Home / Features / The other occupation: Settlers terrorize Palestinians of the West Bank

The other occupation: Settlers terrorize Palestinians of the West Bank

It was another emotional day for Palestinians in al-Khalil, (Hebron) after the burial of martyr Muhammad al-Jabari who was shot to death by Israeli forces near the entrance to the illegal Kiryat Arba settlement.

Thousands filled the streets as the body of the 19 year old boy was carried through the masses up to the martyr’s cemetery which is the same cemetery where 18 year old unarmed Palestinian female student Hadeel Hashlamoun was laid to rest after being shot to death at the checkpoint yawning into segregated Shuhada Street.

Immediately beyond the service, Palestinians gathered in the Bab al-Zawiya section of Khalil for a demonstration against the Israeli occupation forces use of violence which has now claimed the lives of nearly 20 young Palestinians in just one week.  The demonstration was met with extreme violence by the Israeli military which settlers in the Tel Rumeida neighborhood gathered to watch on Saturday afternoon.

The Shamsiyyeh family’s home has long been the target of violence from Israeli settlers who have thrown rocks and other debris as well as poisoning their water tanks on several occasions and even cutting their water pipes on the roof.  Today, settlers again filed onto the family home’s roof to watch the Israeli military assault on Palestinians in Bab al-Zawwiya, some armed with machine guns.

Israeli occupation forces predictably did nothing to calm the situation or remove the settlers from the roof of the family home. One settler sprayed pepper spray from the roof, gassing the family and subsequently himself.  Israeli forces allowed him to leave with the pepper spray without asking a single question. 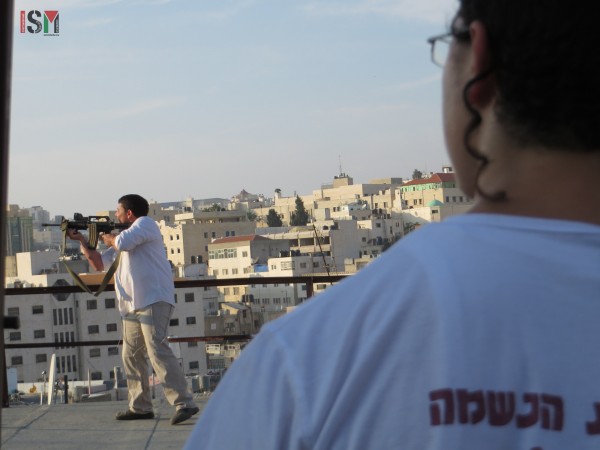 Just a few hours later, a settler armed with a machine gun, lightly slung around him just like an accessoire, came onto the roof. Soldiers close-by refused to ask the settler to leave from the private Palestinian family home’s roof. The settler then suddenly pointed his machine gun at Palestinians, including small children, on nearby houses roofs. Soldiers at first watched the events unfold only to join the settler on the roof, taking orders from him on what to do.
Watch a video here:

In occupied al-Khalil, it has been apparent that settlers rule the military, both through demanding arrests and ID checks of Palestinians and through getting away with any transgression of Palestinian’s human rights by being handed total impunity by the occupying forces.  This is especially disturbing since a West Jerusalem mayor has publicly called for settlers to carry guns amidst a high pressure situation with exploding violence across the occupied Palestinian territories.

In the Tel Rumeida section of al-Khalil, just days ago, settlers held a large march up the hill chanting “Death to Arabs” and burning Palestinian flags.