Settler and Soldier harassment continues for the Daana Family

Members of the Daana family sat up into the early morning hours behind their home as explosions, gunshots and the whine of teargas canisters being fired rang out throughout the evening.  In front of the family home where 16 children live, including a 13 day old infant, broken glass and large stones are strewn about; evidence of the night of violence they endured after settlers from the illegal Kiryat Arba settlement vandalized the fence separating them from Palestinian homes and went on a rampage.

Internationals from the ISM Khalil (Hebron) team joined the family after a night of settler terror injured ten Palestinians in the neighborhood.  13 year old Abdullah Nasser Daana’s chest was bandaged after a settler-thrown molotov cocktail smashed into his body.  When his cousin Basil Khaled Daana, 16 rushed to his aid, settlers threw large stones at him, striking him violently just above his ankle.  Ambulances were prevented from getting to the injured who had called the Mosques for help during the attack, prompting the Mosque loudspeakers desperate late night calls for assistance for the besieged family. 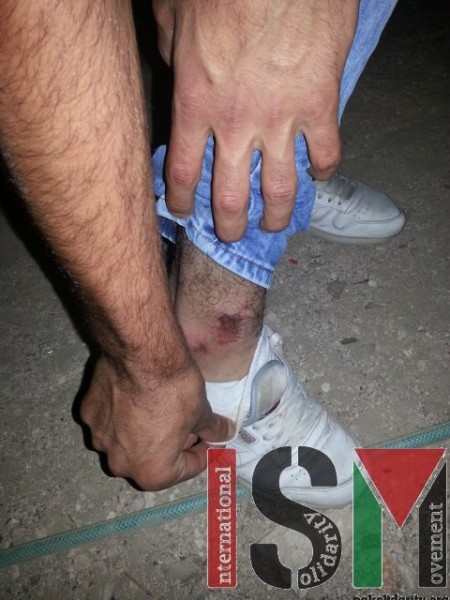 25 year old Emid Sayeed Daana, whose wrist is bandaged after being injured by a stone looks up sharply after the sound of settlers screaming over the fence begins; one of many times throughout the evening this would occur.  “They are shouting dirty things at us.” His words exhibit the commonality of this type of harassment the family gets on a constant basis with explosions randomly punctuating the typical miseries of life under military, and settler, occupation, “This is normal for us.  The teargas, the gunshots.  Where is the life?  Where is the freedom.” 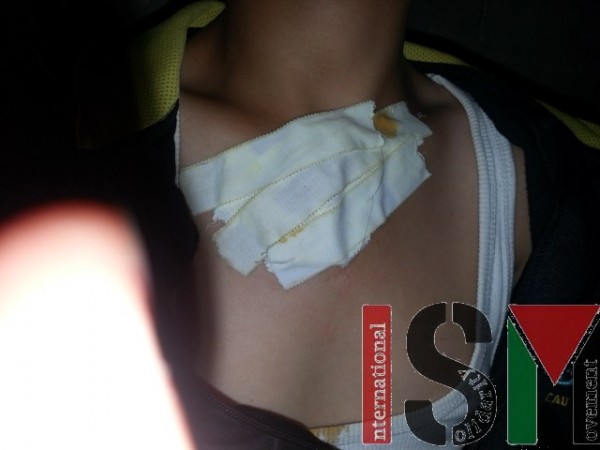 His family is constantly on edge, waiting for the next attack.  “If there are 15 of us inside the house, 15 are also outside to keep an eye out, to look out for them.”  Emid, who in a rare quiet moment, shows us his diploma for studies in media, went on to express, “We cannot all be inside the home, if we do, the settlers will come through the fence and enter our families home.  And the teargas from the soldiers.  You see we can barely breathe here, we have a 13 day old baby inside.  Teargas could kill a baby that young.”

Throughout the evening, intermittently with the deafening blasts of stun grenades, teargas filled the air, sometimes almost unbearably so which caused several members of the family to cover their faces or rush inside to escape it.  In the late night hours, a hurled bottle crashed on the ground in front of the home.

One family member slept outside with two internationals to be on watch for the next attack.  The settlers did not breach the fence again this night, yet every hour that passes with a family living in fear, is an hour of violence being committed against them.  In the escalated chaos of the past two and half weeks in the West Bank, another Palestinian family navigates the continued crisis of a human rights crushing occupation.