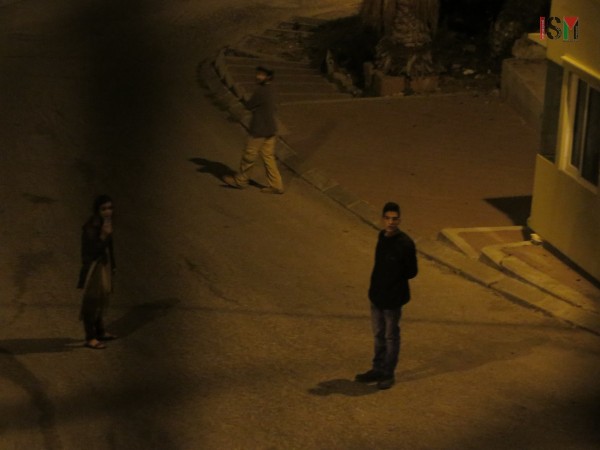 On October 25th, around 2am, strange noises could be heard through the window of an apartment in Tel Rumeida where nine international human rights activists are currently living. Upon further inspection, four adult male settlers were identified, trespassing on the property. In full view of the soldiers who are constantly posted on the street directly in front of the house, two of the settlers ascended the staircase and attempted for several minutes to open the locked, latched door. They stopped and went back down the stairs, screaming “f*** you!” and making obscene gestures when the two at the bottom realized the scene was being filmed, and warned the others.

When the three soldiers at the bottom of the stairs were immediately approached by the internationals about the incident, their reactions were flippant and vaguely threatening, including laughter, repeating that “everything is fine”, and the flat out denial that any of them had seen any of the settlers, with the caveat that “though [they] didnt see any settlers, [they] told them to get down”. Soldiers reiterated to the shaken internationals that “Palestinians want to kill us all”, and referenced the ‘arab threat’ posed by all the alleged perpetrators of stabbing attacks, almost none of whom have been convicted though almost all have been executed. Soldiers reiterated that the settlers were gone and that internationals would be protected, despite repeated questions about why these heavily armed soldiers didn’t manage to detain or even address or perhaps even see the trespassing illegal settlers. When the soldiers were asked to produce their commander, one of the soldiers named himself, Yonaton Zair. He wore no standard markings of an officer, and when asked the number of their battalion, he simply said Tzahar. Neither he nor any other soldier would produce any other information.

Unfortunately, this is fairly standard operating procedure in Hebron, where soldiers effectively work at the command of the settlers.