Recently weakened by heart attack and subsequent surgery, Hashem made his way slowly down the hill from his home in the Tel Rumeida section of al-Khalil to meet with the group of internationals from whom he requested assistance in picking what was left of his harvest of olives after settler theft.

Though no such law exists, the internationals were disallowed to get through the simple stretch of two minutes walk to get to Hashem’s land.  After taking a back way to the property, Hashem was seated, trying to catch his breath after pointlessly walking down the hill only to be yelled at smugly by the near dozen Israeli forces to leave.

Within twenty minutes of the harvest’s commencement for the two trees left bearing fruit after settlers picked the area clean in recent weeks, a settler armed with an m-16 machine gun descended into the olive groves from the settlement up against Hashem’s property and began approaching the family members and volunteers, taking close up photos of them.  Two settler women shouted abuse at the harvesters from the yard and window of the settlement. 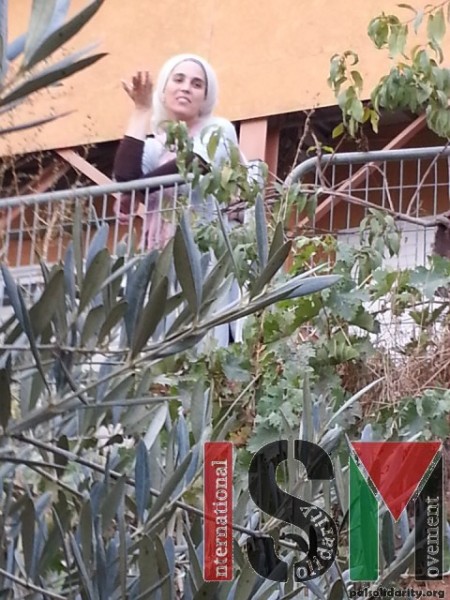 A settler woman laughs as she and two others harass Palestinian farmers and international monitors.

Israeli forces and Israeli police arrived on the scene and rather than interrogating the armed man who was visibly and audibly harassing the family and volunteers picking, they approached Hashem and ID checked him while one of the women continued to shout abuse unabated, “Why are you stealing our olives!  Go back to Germany and pick olives!”  An all-purpose attack against anyone questioning settler violence, harassment, theft and brutality is that you are, without question or reason, a Nazi and you should go back to Germany.

Israeli forces, rather than end the abuse and let Hashem’s family, already the constant recipient of vicious settler abuses, harvest in peace, the family and international monitors were asked to hurry up and finish the harvest so they could be on their way.  This wasn’t a difficult request to grant as there were nearly no olives left to harvest after the theft. 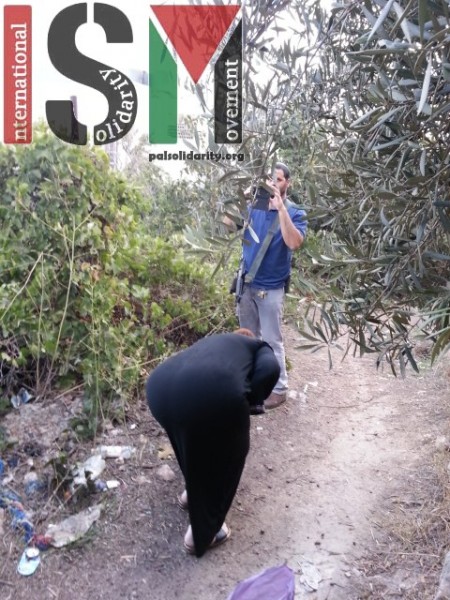 Machine gun armed settler photographs a Palestinian woman as she tries to harvest on her land.

Hashem’s struggles with settler abuse during his harvest in just the latest in a string of torment against Palestinian farmers, many whose only income is wrought from the olive harvest.  In Burin, masked settler terrorists set fires to Palestinian farmer’s trees and property, splitting open the head of a British foreign national monitoring the harvest from close range with a stone and smashing the windows of a Palestinian farmer’s car.

Israel, who is purportedly addressing security concerns, has done nothing to help the situation.  They have managed to exacerbate the escalating situation by sending additional Israeli forces into al-Khalil and enacted bag and body search protocol for Palestinians passing by on Tel Rumeida streets on their way to school, work and home.