The following post is written by the medic that was present on the scene on May 15th 2014, during the killing of Mohammad Odeh and Nadeem Nuwwarah as protesters commemorated al-Nakba near Ofer Military Prison.

During Nakba day commemoration, Birzeit’s student council were trying to gather students to go to Ofer, but it seemed that no one was interested. I decided to go by myself, so I gathered some friends and went to Ramallah and then to Ofer.

En route to Ofer, I received a call saying “a kid got shot with live [ammunition]..it’s bad.” I then asked the driver to hurry. We arrived to Ofer and there were many people. Three Israeli soldiers were standing up the hill 120 meters away with the rest of them standing 500 meters away in the field across. There was teargas and rubber bullets, which was normal. Nothing I’m not used to.

Two kids were going back and forth throwing stones at the three soldiers, even though they kept missing the soldiers they continued to try because they are kids. I went down to open my bag and I looked back to see if it’s safe and I could see the two kids coming back.

I can still remember the two kids, and two flags. One green and the other black, one was for Hamas and the other was the Nakba flag. 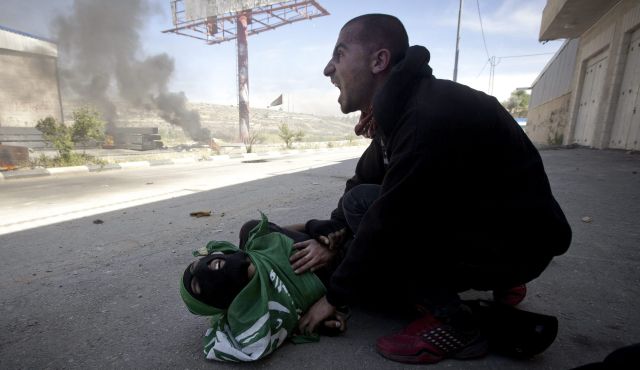 Medic pressing against Mohammad Odeh’s chest after he was shot with live ammunition. May 15th, 2014 – photo by AP

I searched inside my bag to find something that to this day I can’t remember what it was I was looking for. Suddenly I heard a shot. One shot and it was live ammunition. I jumped to the left and went down even though I know it was live and live travels faster than the sound it projects. But it was the natural accustomed reaction. Two seconds is all the time it takes for the sound to disappear. I look to my left and he was falling. Mohammad was falling to the ground. I ran to him as he was two meters away.

I was able to reach him before he hit the ground. I looked at him, checking his body. I saw a hole in his chest and I put my hand on it to apply pressure and stop the bleeding, basic first aid training.

He held my hand and looked at me trying to say something but he didn’t have the time. I screamed for an ambulance and asked for help. Two people came to help me carry him. The ambulance was 10 meters away, the man next to me was saying “Mohammad stay with us.” That’s how I knew his name.

We put him in the ambulance and returned to where we were.

I began to tell myself he is alive and he was shot in the lung and fainted, that’s why there was no blood only a hole. Only one spot of blood was on my hand. I tried to convince myself that he is alive. He is alive.

I knew though. I knew something was wrong. I became a ghost walking in Ofer back and forth towards the soldiers. News started to arrive about two martyrs. Nadeem and Mohammad. I started asking about Mohammad Abu Al Dhaher and the other Mohammad who was shot before I arrived. I started calling my friends at the hospital asking them to confirm the name. 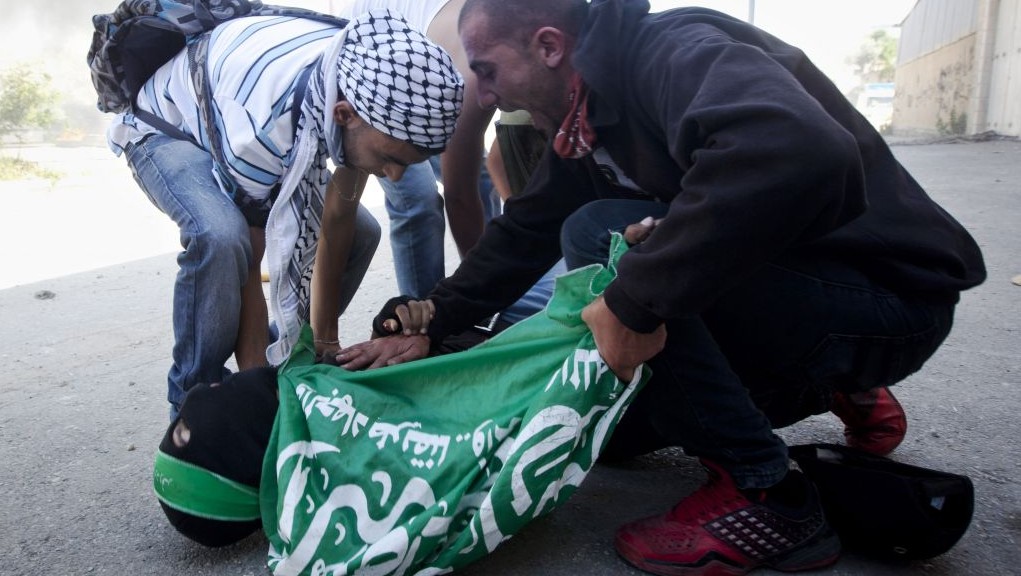 Mohammad Odeh being carried to a nearby ambulance. Ofer military prison, May 15th, 2014 – photo by AP

Twenty minutes later, my friend who worked at the hospital called and said “it was Mohamad Abu al Dhaher. The last one you put in the ambulance.”

I stayed in Ofer. I didn’t know what to do, I wrote their names on the wall and stayed there, but I wasn’t really there. I was a ghost.

Two hours later I went to the hospital, I’m not even sure if it was two hours later. I had lost track of time at that pont. I couldn’t feel it anymore. It’s as though the whole world had stopped at that moment. I arrived to the hospital and entered inside. There were tons of people gathering. Friends, journalists..but I couldn’t look at any of them.

Afterwards, a group of protesters had marched to the hospital coming from Ramallah after they closed down the shops in honor of the martyrs. I stood in the middle of the street as they all passed by me. I didn’t know where to go, or what to do. Journalists that were asking for interviews were saying “we heard you were the last one next to the martyr.” I went away. I couldn’t say anything. I tried to find a place where I can’t see anyone, so I went behind a car and stopped for a few minutes trying to understand but I couldn’t. Everything began to flash but I couldn’t remember. I began to breathe fast and wasn’t able to move my face. People gathered around me in attempt to take me inside the hospital but I resisted and began to call out the name of a friend that can take me out. Someone knew her and after a while she arrived and tried to take me inside the hospital. I asked her to take me out of there and she did.

That’s when my trip began.

I still remember his masked face, I never remembered his face because I only saw his face on posters, a week later.

3 minutes. 3 minutes is the time we had. They always told us that our job as medics is to keep the patient alive until the ambulance arrives. But this time, even 3 minutes weren’t enough.

It has been a year now but it still feels like yesterday. Everyone has forgotten and it’s only his family that is living in torment. Today I realize that he is gone and nothing that we could have done would have stopped it. Nothing.

The only thing that we should do is keep fighting for them and for ourselves, until we find justice. Until every soldier is held accountable for their crimes.

The dead are gone…and the living are hungry.