Resistance to the destruction of olive trees in Wadi Qana

Tuesday, 17th March 2015, four farmers in the Salfit valley of Wadi Qana were issued with notices that they had 48 hours to remove their olives trees or they would be removed at their own cost. Failure to execute the orders are punishable by imprisonment, or fines up to the maximum penalty of the law.

Supporters, many from the nearby village of Deir Istiya, as well as locals and internationals, turned out in anticipation of soldier presence or settler provocation, but no conflict took place. 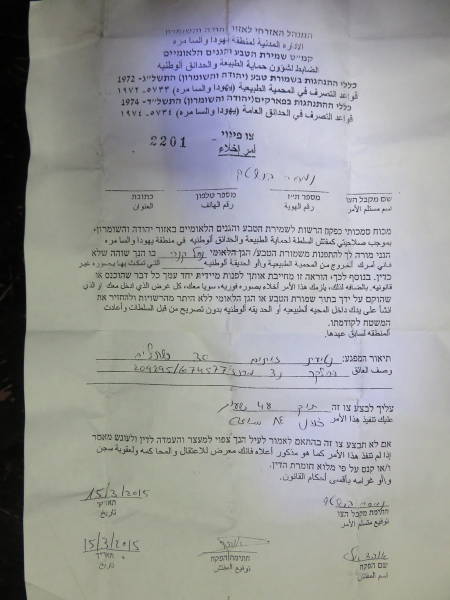 A crowd of approximately 250 supporters gathering in the valley were met by a festive atmosphere. Representatives from various organisations in conjunction with the Deir Istiya Municipality converged to remove waste from the spring and its surroundings.

In 2008 and 2011 farmers of Wadi Qana were issued with similar notices.  These removal orders were not carried out. In 2012 trees were removed without notice. Approximately 3,000 trees have been destroyed in Wadi Qana by settler attacks and by order of Israeli authorities. 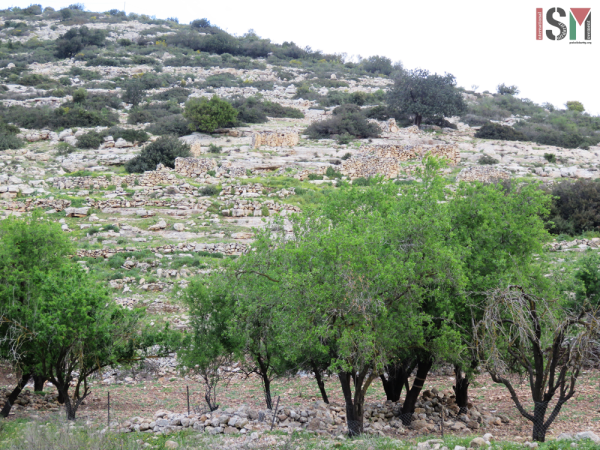 The Deir Istiya region has a population of approximately 12,000 people, 4,000 of whom live in town. The illegal settlements of the area, of which seven surround Wadi Qana, house approximately 15,000 settlers. Wadi Qana itself sits within the 31,000 hectares around Deir Istiya which has been zoned as Area C, leaving only the 1,527 hectares of the township in Palestinian controlled Area A. Under the Oslo Accords, Israeli law forbids Palestinians to build structures or plant trees in Area C, while conversely, entitling illegal Israeli settlements to develop and expand. (Al Jazeera has a good explanation of the different areas here.)

Speaking of the situation in Area C, a frustrated resident of Deir Istiya exclaimed, “They have the right to cut the old olive trees but we have no right to grow a new one. See the discriminations?”

Wadi Qana is a strategic area in the region, containing several significant natural springs. These springs and the crops which they irrigate have been under serious threat since 1994 when settlements began running sewage into the valley. While this practice was limited in 2005, many ocurrences have been identified, with four settlements’ waste currently believed to be pumping into the valley below.

While only two of the seventeen natural springs remain unpolluted, water from the underground aquifers is dropping due to the increasing demands of the ongoing settlement expansion. This has caused many farmers to move away from orange and vegetable crops to the more arid-adapted olive trees. The livelihoods of farmers of Wadi Qana are increasingly under threat because of the occupation and its apartheid laws.