In Gaza the farmers irrigate the land with their blood

Tilling the land in Gaza is one of the most dangerous jobs in the world. The Zionist Occupation Forces fire on the peasants and their families while they sow or harvest their own land near the infamous Zionist fence which surrounds Gaza. They also burn their fields and routinely ravage their crops with bulldozers, leaving hundreds of families ruined and preventing the Gaza Strip from developing it’s already devastated economy or achieving a minimum of food sovereignty. 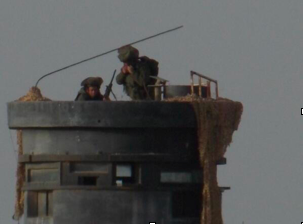 Last Sunday a group of peasants from Khuza’a, a village located in the South of the Gaza Strip, called us to ask for our presence as deterrent witnesses during their journey to sow their fields. The days before they had been harassed by Israeli soldiers, who fired their rifles and shot tear gas grenades from where they crouched inside their tanks and military turrets towards the peasants who were just trying to work their land under a hail of Zionist bullets. 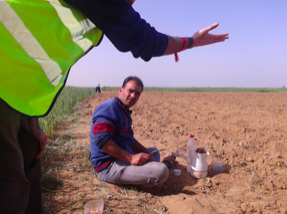 Azzam taking a rest after a morning of hard work.

Azzam, a humble 40 years old farmer, spoke to us of the tragedy of his life: “During the last attack Israel bombed my home and destroyed it completely; now I’m living with my family in a plastic tent.” He also explained us the shameful differences between a Palestinian farmer and farmer from the Israeli occupation. “They kill us, they shoot the few old tractors that we have, they burn our crops and bomb our homes, while their farmers work escorted by a whole army, one of the most powerful armies in the world.” 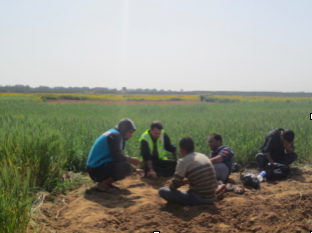 We finish our task and have a coffee sitting on the ground whose furrows house the seeds sown at the risk of Palestinian farmers’ lives: seeds of wheat, watermelon, peanut, seeds that may not even have the chance to germinate. Sitting now quietly on the scorched land, on the occupied land, land irrigated with Palestinian blood – too much blood – Azzam fixes his eyes beyond that disgraceful fence. He looks beyond the military vehicles, beyond the armed towers, armed with guns that can fire at the a push of a button from Tel Aviv; there we can see the stolen green fields of Palestine, a land deprived of it’s real name and owner, that place that is now known by the infamous name of Israel.