On the 24th of February in occupied Al-Khalil (Hebron), Israeli forces opened fire on dancing Palestinian youth, firing tear gas and throwing stun grenades at group of young children performing a traditional Palestinian dance as a form of protest in front of Shuhada checkpoint. 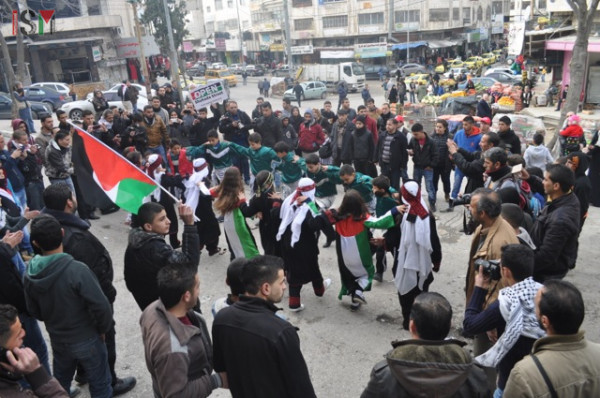 The fifteen young dancers, Palestinian girls and boys between the ages of six and twelve, gathered to perform dabke, a traditional Palestinian dance, in an event organized by local Palestinian activist group Youth Against Settlements. They staged their dance on the open street in Bab Al-Zawiye (in the H1 – officially Palestinian Authority-controlled – part of Hebron) near Shuhada checkpoint, as part of a week of actions planned by Palestinian organizers around the annual Open Shuhada Street campaign. The children began performing under heavy military surveillance, as at least thirteen soldiers occupied roofs surrounding the entrance to the checkpoint. 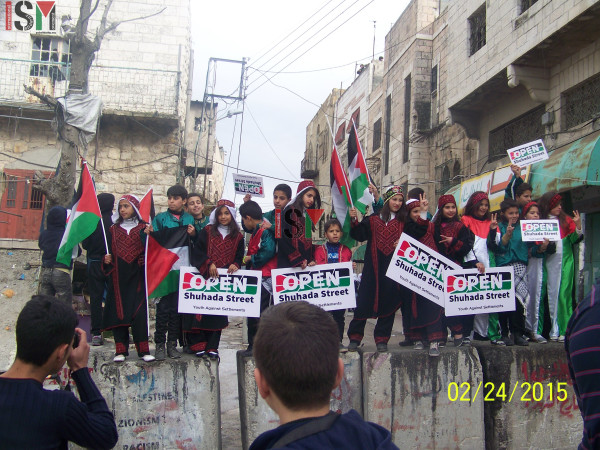 The young dancers posed for a photo-op on top of the roadblocks in the street leading to Shuhada checkpoint. Israeli soldiers are just visible on a roof to the right of the street.

Even before the demonstration had begun, Israeli forces closed Shuhada checkpoint to Palestinian men, only allowing a few women through. Shuhada checkpoint controls the main access between Bab Al-Zawiye and the the H2 (fully Israeli-controlled) neighborhood of Tel Rumeida. On the H2 side, the checkpoint faces Shuhada street, and soldiers restrict Palestinian access onto the short portion of Shuhada street where they are still allowed to walk.

“As soon as the dancing kids moved closer to the checkpoint, soldiers immediately attacked with two tear gas grenades and two stun grenades,” reported an ISM volunteer who witnessed the incident. “Israeli soldiers fired tear gas even though the children were not throwing stones.” 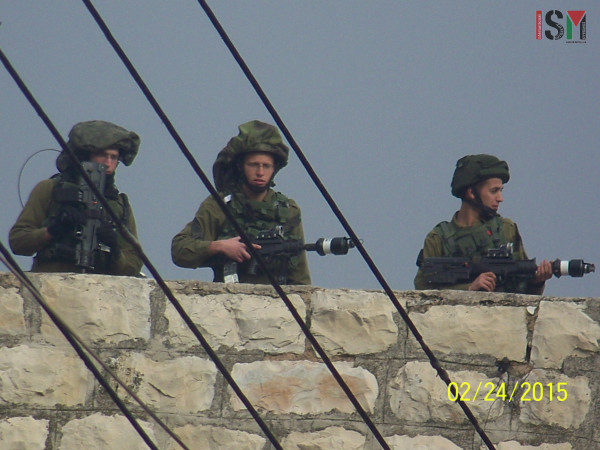 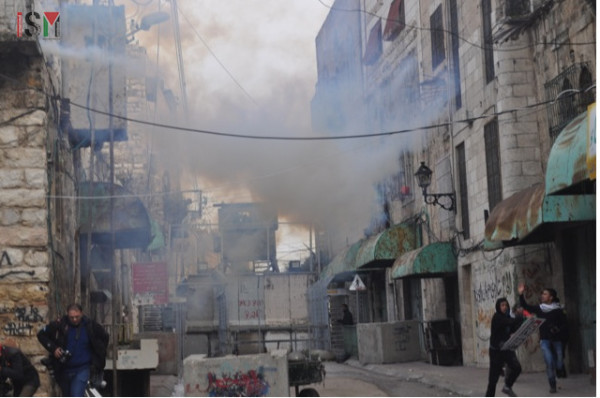 After first fleeing the assault, the Palestinian children managed to continue dancing even as around twenty soldiers and eight border police advanced from the checkpoint into Bab Al-Zawiye. Israeli forces threw a dozen stun grenades after a few youth began throwing stones at the checkpoint.

Clashes continued for about an hour and a half, as Israeli soldiers and border police fired even more rounds of tear gas, several additional stun grenades, and eventually rubber-coated steel bullets at Palestinian youth. Advancing further and further into the commercial center of Bab Al-Zawiye, they ended up shooting into the crowded streets of the city’s market area. Local activists reported that two Palestinians suffered injuries from rubber-coated steel bullets. 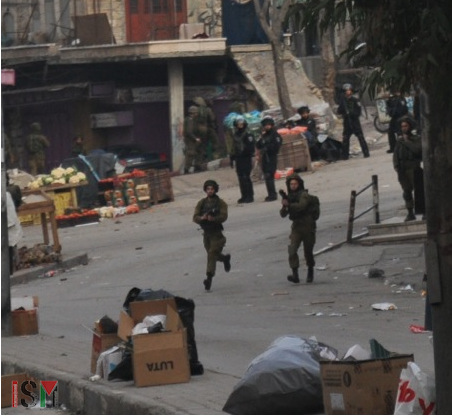 February 25 marks the 21-year anniversary of the Ibrahimi Mosque massacre; in 1994 US-born extremist settler Baruch Goldstein murdered 29 Palestinian worshipers inside the Al-Khalil mosque and injured dozens more. In the time following the attack, Israeli authorities initiated a crackdown, not on those occupying the city’s illegal settlements, but on Palestinians. Israel put in place policies, including the closure of Shuhada street, which would eventually lead to Al-Khalil becoming the divided city it is today.

Children in H2, which includes Al-Khalil’s historic Old City and once-thriving market, constantly endure the violence and daily humiliations of Israeli military occupation. Children living in the neighborhoods of H2 are routinely tear gassed on their way to school and face arrest, attack and daily harassment at checkpoints. The Open Shuhada Street actions are a yearly expression of resistance to Israel’s Apartheid system, as Palestinians young and old demand and end to the occupation.