26th December | Ally Cohen – originally posted on Mondoweiss | Hebron, Occupied Palestine Hebron, Palestine, December 24th. As we made our way to ‘checkpoint watch’ we were discussing what it would be like that morning, would there be tear gas? Stun grenades? Child arrests? Every day children are forced to walk through military checkpoints, manned with armed border police officers, in order to reach their schools.

I have seen the Israeli military firing tear gas canisters, throwing stun grenades, and detaining and arresting schoolchildren and their teachers. Sometimes the children throw stones towards the checkpoint, sometimes not. Either way the military violence the children of Hebron face is as unbelievable as it is disgraceful. 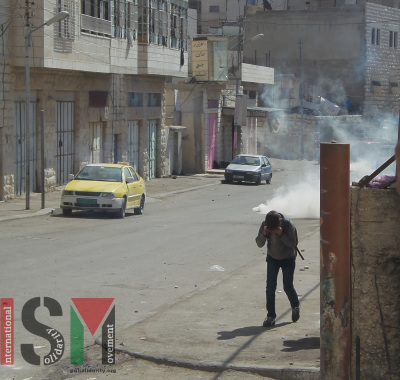 A child trying to escape tear gas fired by the Israeli military close to several schools on October 13th in the Salaymeh neighbourhood of Hebron.

To reach the Salaymeh checkpoint, the neighborhood that International Solidarity Movement (ISM) activists monitor each school day morning and afternoon, my ISM colleague and I walked down Shuhada Street. Shuhada Street has been completely closed to Palestinians since the year 2000. It used to be the heart of Hebron, with bustling shops and lively homes, now it is often christened, ‘Apartheid Road,’ or ‘Ghost Town.’

I did not see the broken bit of road that I tripped on, so as I fell my first cry was mostly shock. The pain swiftly kicked in, I felt my ankle twist, and I knew I was in trouble. My friend tried to steady me and help me sit down. However we were standing just outside the illegal Beit Hadessah settlement, and I really wanted to move.

Three settlers were standing close by, they started to call to me, “sit down, sit down!”

By this point, tears were running down my face and I suppose it was clear that I was not fine. They yelled at me again.

“Sit down, sit down!” And then one of the men added, “sit down, you sharmuta!” Sharmuta is the Arabic word for whore.

Eventually the pain, and my inability to walk, overcame my desire to leave the area. I staggered to the pavement and sat, still crying, trying to work out how I was going to move.

Just as I thought the situation could not get any worse- I was in pain, in tears, outside a settlement, and late for checkpoint watch- a car pulled up next to me.

Anat is a settler living in Beit Hadessah. She is known to be extremely violent and volatile. I have had several problems with her in the past, where she has kicked, pushed and spat violent words at me. Whenever I see her I think about my Jewish grandparents, who like so many Zionists defend the settlers and their colonial thievery. I wonder what they would say if they knew that a settler woman verbally abused their youngest Jewish granddaughter?

I wish I could remember exactly what Anat said to me, and I wish even more I had been able to record her words; instead I can only offer the ‘highlights’ of our exchange.

This continued for some time, her face filled with hate as she leered over me while I clutched my ankle.

Eventually, Anat called the Israeli police. They arrived and walked towards us. I tried to stop crying, and fleetingly wondered if I could be arrested for spraining my ankle. After listening to Anat rage at them in Hebrew they stared down at me and told me I had to move.

It was roughly ten meters from where I was sat, to the part of Shuhada Street where Palestinians are ‘allowed’ to walk.

I bargained with them, in hindsight perhaps I could have asked why I was not allowed to sit on the pavement nursing my foot? At the time I was too bewildered, and in too much pain, to think clearly. I asked for five minutes to gather myself before I tried to move. They agreed, and while I strategically planned how to stand, Anat continued to yell in Hebrew and throw insults towards me.

With the help of my friend, I managed to stand and hobble away. Anat left, clearly satisfied with her achievement. The only other noteworthy moment of the experience was the Israeli police officer that quietly apologized to me after Anat was out of earshot.

“I’m sorry, they’re crazy [the settlers] there’s nothing we can do, and she’s the craziest.”

I’ve tried to think about what would happen to a Palestinian in this situation, but of course that’s pointless as Palestinians are banned from Shuhada Street.

I suppose what has struck me the most about this incident, is that a crazed, racist, extremist settler, can order the Israeli police to do her bidding.

In Hebron, I am exceptionally privileged; I have white skin and a European passport. I’m also Jewish, but due to a previous experience where border police officers banned me from entering the Palestinian market due to my religion, I try to keep that quiet. All that privilege and I am still not allowed to sit down and quietly cry about a sprained ankle, if a settler woman says no.