For the past two days in al-Khalil (Hebron) Israeli soldiers have stopped and searched many Palestinians in Tel Rumeida. 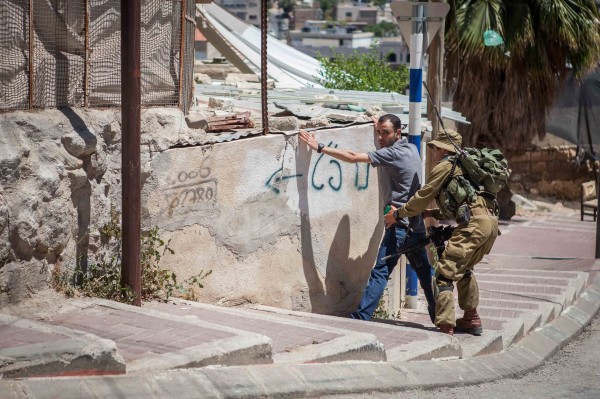 At approximately 22:00 two nights ago, a colonial settler began aggressively photographing Palestinian children who were playing football in the street on Tel Rumeida hill.  Two ISM activists began filming her.  She then approached one ISM volunteer and pushed the camera very close to his face.

A group of Israeli soldiers initially tried to block the settlers and prevent them from attacking the Palestinians, but when this was unsuccessful, decided instead to force the Palestinians to move.  They attacked the Palestinians using stun grenades and pushed a number of people.  The settlers and soldiers then began attacking ISM activists who were filming.  The soldiers cocked their guns several times and pointed them in the faces of ISM volunteers.  A soldier stamped on the foot of one of the activists.

Two ISMers, and an activist from Christian Peacemaker Teams were physically hit by settlers who tried to steal their cameras.  One activist turned his back to a solider and began walking away as instructed by him and was kicked forcefully from behind in the testicles by the soldier.  Soldiers then positioned themselves to prevent Palestinians from returning to their homes.

Shortly after this, around 40 Palestinians left the mosque at the top of Tel Rumeida hill and began walking down the hill towards their home.  They were stopped and threatened by the soldiers.  The soldiers eventually agreed to let people return home but insisted that people walk one by one.  At the same time, soldiers allowed a large group of settlers to congregate at the junction.  Palestinians were therefore forced to walk through the settlers alone, and were subject to intimidation and threats.

An ISM activist present: “The soldiers and settlers were very aggressive and frightening, so much was happening at one time, it was hard to know what was going on. They kept yelling at us in Hebrew and wouldn’t listen when we told them we didn’t understand. At one point a military jeep drove up a hill towards a group of Palestinians (who were leaving the mosque) and us. We were caught in a corner and couldn’t move. The jeep stopped in front of us, they threw a stun grenade first, and then several soldiers jumped out of the jeep, cocked their guns in our faces, and yelled at us in Hebrew. They were so angry, it felt like they wanted to shoot us.”

During this time, the Shamsiyeh family was attacked by settlers (15-year-old Awne Shamsiyeh was recently interviewed by ISM).  The settlers entered their garden and forced cameras in their faces.  One settler punched a Palestinian woman.  Another female settler, who appeared to be around 17-years-old, hit an 11-year-old Palestinian child on the hand with a rock causing swelling and bruising. 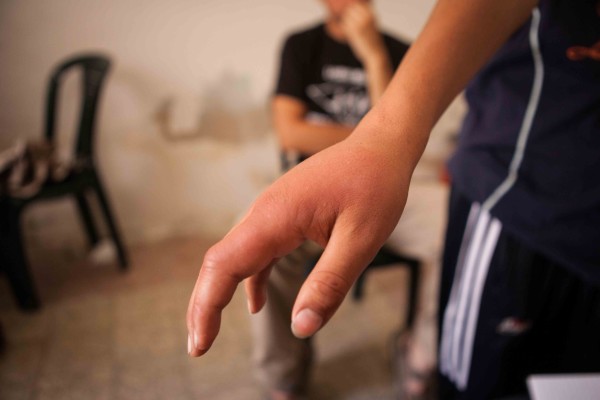 The soldiers did nothing to prevent the attack, but instead shouted at the Palestinian family and ordered them back into their house.

At approximately 22:00, settlers from the illegal settlement Tel Rumeida erected a fence blocking a Palestinian home, preventing the family from reaching their house.