On Tuesday 11th March 2014 villagers from Arab ar Rashyaida, 15 kilometers (10 miles) west of Hebron, noticed that a large tent and industrial digger had moved onto a hill top on a villagers land. ISM Hebron was called and accompanied local people and Palestinian activists to confront the settlers. 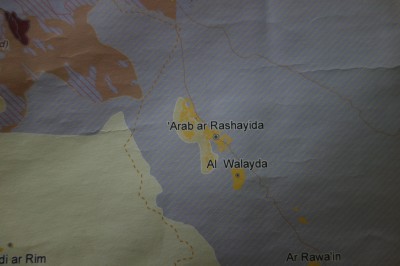 On arriving at the village, the demonstrators parked on the opposite hill and made their way through the valley to the settlers’ encampment. The settlers were armed with automatic hand guns, assault rifles, and dogs to protect the illegal camp. Resistors confronted the settlers in a non-violent way while settlers took photographs on the phones of all the protestors. After a short time a settler armed with a machine gun and dressed in black with his face covered climbed a wall and started to insult a Palestinian activist, stating that he would kill other Palestinians.  The activist responded with in a raised voice matching his righteous indignation at the Zionist’s hateful comments. The army soon arrived and attempted to move the protestors from the construction area. On many occasions the leader of the settlers took the soldiers to one side to make suggestions. A proposal was made that, if the settlers camp is dismantled, the protestors can leave and take the matter up in court, but this was dismissed. 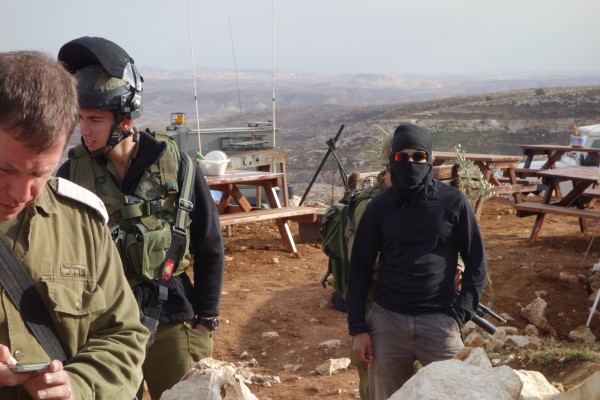 Soon a high ranking military officer arrived and was presented with ownership papers from a villager which date back 130 years. The officer told him that the settlers had ownership papers too (presumably not quite so old!).  Meanwhile the settler, with his face concealed, had made his way across to the Palestinians’ cars with his aggressive dog following. A small group made their way across to stop him damaging the vehicles. On seeing the Palestinians approach, the settler made his way down to a taxi driver,  that was waiting to drive the ISM team back to Hebron. The Palestinians feared that the settler would attack the taxi driver, so the group drove down the hill to support him. The armed settler then made his way back to the constructions site. Sometime later the Israeli police arrived and arrested the activist who had argued with the Zionist armed settler, who had complained that he was physically attacked. The Palestinian went with the Police peacefully and was later arrested and charged with the assault. Activists exchanged video evidence and the prisoner was released on bail with a payment of 2000NIS. We await a trial date.

Arab ar Rashyaida is extremely vulnerable to occupation by settlers. The land surrounding the village is designated as “Intended Nature Reserve” under the Oslo Interim Agreement, and as such is under full Israeli control. The strategy of building outposts on Palestinian land as a seed to develop illegal settlements is well established and supported by the Israeli authorities, despite the fact that it breaks International Law and the 4th Geneva Convention.