New
Home / Gaza / The water in Gaza is not only water

The water in Gaza is not only water 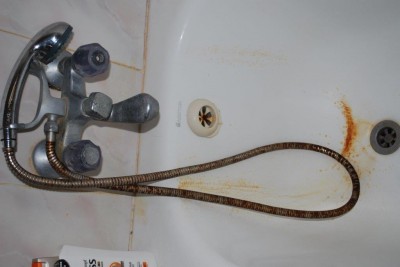 I was just going to make dinner when I realized the filtered water in my tank was almost done. Perhaps it would be enough if I used the last of my bottled water. But then I would have nothing to drink with my meal. And there would be no coffee, not after the food and not for breakfast. Glances at the tap, I considered diluting the filtered water with tapwater, in order to save time and to avoid having to walk two blocks to fill the tank. It was dark outside, and the shop with water might be closed.

Tapwater cannot be used for cooking, or should not be used for cooking. I avoid doing it anyway. I wash dishes in it, but do not use it to cook my rice. It’s salt. Saltwater penetrates the underground aquifier, which it is larger than the natural supply of fresh water can fill. But the seawater is not its only contaminant. According to the United Nation, chemicals and sewage also pollute it, which is not surprising when 90,000 cubic meters of untreated sewage gush out every day. Sewage, from the toilets, back in the taps. With water treatment plants, that works. But in Gaza, the problem is that there is not enough diesel to run the generators around the clock. And for those Israel has bombed, well, it also stops the import of replacement parts. Meanwhile seawater, chemicals and sewage increase in the water supply. By 2016, UN expects the water to become completely unusable. Only three years are left until then. And at 2020, no one they say, no one will be able to live here.

I open the fridge, hoping to find something that does not require water for cooking. I close it again. Maybe the store is open, but the cistern outside it is empty. It’s not just me who needs water. And some families have to spend as much as a third of their income on it. They must use the contaminated tapwater far more than I do. When I first came here, I used tapwater to brush my teeth. That was a mistake I will not repeat. But I rinse the toothbrush in it afterwards, shaking it carefully. I think that’s okay. A Swiss woman visiting Gaza asked if I drank the filtered water. It should be drinkable, but someone told me it is only filtered from salt. I do not want to find out how things are, do not want to know. I buy the more expensive bottled water. But I wash my clothes in water from the plumbing system, like everyone else here is forced to do. I wash my hands in it, my face. I take my showers in it, washing off my salty sweat with contaminated water, polluted not only by salt, like everyone else here must.

It becomes more polluted every year. The farmers have problems with it. It’s too salty for citrus seeds to germinate, and causes harvests to decline for the products that still grow. Tanker trucks drive to those who can afford to pay. Israel says it’s concerned, has plans to pull in a pipeline and talks about desalination plants, the same plants it keeps from entering. And I think about what will happen when the disaster strikes, when no one can live here, when everyone is forced to flee: a new Nakba, caused not by the force of arms but by the siege. Where can they go? Who is prepared to receive them? And what will happen then? Will Israel then will take over the empty land, this terra nullius, pumping in water, getting the desert to bloom? I hear it as an echo.