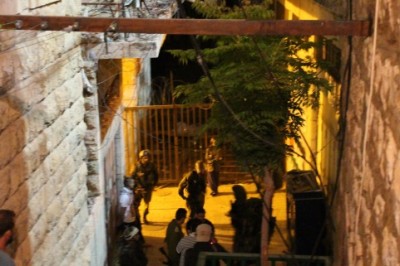 On Tuesday 2nd October local Khalil shop owner Abed Sider and his 3-year-old niece were hospitalised after being assaulted by several soldiers.

On the day of his birthday at 6:30pm, Abed had his home invaded by five Israeli soldiers who had come to interrogate his three year old niece on allegations of stone throwing. The Israeli forces dragged Abed from his home into the street; this aggressive action caused injury to his arm which later necessitated hospital treatment. Additionally the Israeli soldiers injured Abed’s three-year-old niece who also required hospitalisation.

The soldiers alleged that nearby illegal settlers from Beit Hadassah had made several complaints of stone throwing from the little girls’ bedroom window that overlooks the settlement playground. The window in question is sealed and caged to protect the Sider family from the constant attacks from the settlers.

An Israeli commander later came to the Sider family home and was convinced by Abed’s brother, Shadi, to view footage of the incident that showed the soldier’s aggressive actions. After viewing the video, the commander stated that the soldiers had been acting “out of accordance” with Israeli army policy and that they will be reprimanded and moved to a new post out of Hebron.

This is another incident in a long line of harassment and intimidation that Abed has had to endure; his seven-year-old son was recently blinded by an acid attack from settlers, and is in Jordan awaiting surgery to restore his vision. The Israeli government has refused Abed and his family the necessary travel permits to visit their son and pay for the treatment.