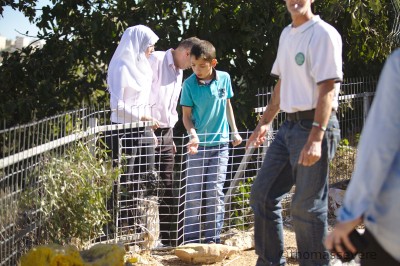 Palestinians view the fence around the Azzeh home

One international was arrested after settlers fenced off the Asseh family home for a second day in a row in Hebron’s Tel Rumeida area.

Yesterday, early Saturday morning, settlers tied a fence across the exit of the Asseh family home with a wire gate to prevent them from leaving for a second day. After the family and internationals removed the gate, settler children threw rocks, water and water mixed with faeces at them. Two Israeli soldiers stood close and did nothing. The police arrived but also took no action despite being informed of what had happened.