Israeli settlers in the Wadi al-Hussein valley neighborhood of occupied Khalil (Hebron) have begun building a new road on land owned by a Palestinian family. The road will be around four meters wide and lead to the illegal settlement of Kiryat Arba which is above the valley. When completed it will split two olive groves. 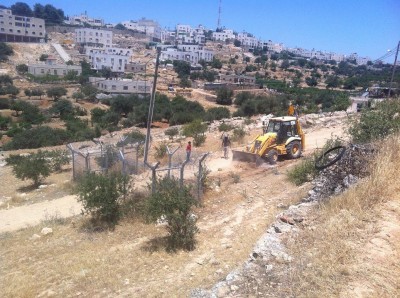 The work on the new road began at around 11am as settlers arrived, accompanied by bulldozers and Israeli soldiers and police. Initially, the settlers made a tent and planted their flag, as if doing that could overturn generations of Palestinian ownership of this plot of land. Soldiers also blocked off a portion of the main road and bulldozers dug holes in the ground. A truck full of Israeli recording equipment has also been present on the scene.

The family who own the land were outside watching this happen. Israeli colonizers tried to build this road three weeks ago, claiming they had a court order authorizing it, but were met by widespread resistance and were unable to provide a copy of the court order. See details here. Building continued for the following days.