Witness to a child arrest in occupied Hebron 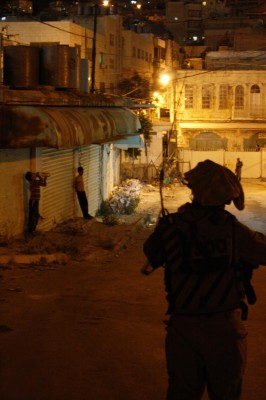 Since coming to the West Bank I had heard a lot about the Israeli army detaining and arresting children. Despite this, the first time I saw it myself, I was amazed. Amazed that people – young soldiers – could intimidate, harass and arrest kids. And all done with smiles on their faces.

We were called to the army base on Shuhada Street with a report of two children being detained. We walked down the street, passing checkpoints, getting held up while the soldiers ‘checked’ our passports and hassled us. When we got close to one of the illegal settlements in Hebron, we saw a mob of about ten soldiers down a side road – when we approached they disbanded. As they moved apart we saw that they had been crowded around two young children, around ten years old, who were backed up against a wall.

On our arrival a group of soldiers came over to us, laughing and joking with each other, trying to talk to us in broken English. According to them the children had been caught throwing stones in the old souq. It seems laughable to think they’d be so concerned, being covered head to toe in military gear and holding guns. The children were forced to stand apart, in the dark, in an alley full of soldiers for over an hour. We asked the soldiers if they knew where their parents were, if we could talk to them, if we could walk them back into the Palestinian controlled area of Khalil. All of our questions were met with the same answer; “No”.

We sat and waited, waving at the children, making sure they knew we were there to try and help. Attempting to talk to the soldiers was futile; “we’re waiting for further instruction from higher up”, “I love kids, we’re not doing anything wrong”, “I’m just doing my job”. All I could think was: “Imagine if your kids, or your brothers, were missing at night and you didn’t know where they were?!” – the whole thing felt disgusting and underhand. Even the way they moved away from the kids when they saw us coming – they must have known that what they were doing was wrong. That it would seem wrong to the international community if they knew about it.

The two children seemed fairly calm after a while, eventually exchanging jokes and swapping positions when the soldiers weren’t looking. We decided, amongst the five of us that were there, that two should walk back up to the main checkpoint between the Israeli and Palestinian controlled areas. This would be where the children would get taken when/if they were released. My comrade and I walked back up Shuhada Street, the soldiers laughing at us as we left. We of course got stopped for a long time at another checkpoint in between – in fact, long enough to see the soldiers escorting the two children up the road towards us. We could not follow to make sure they were okay as the soldier who had detained us was holding our passports and ‘radioing in’ to ‘confirm our identities’. 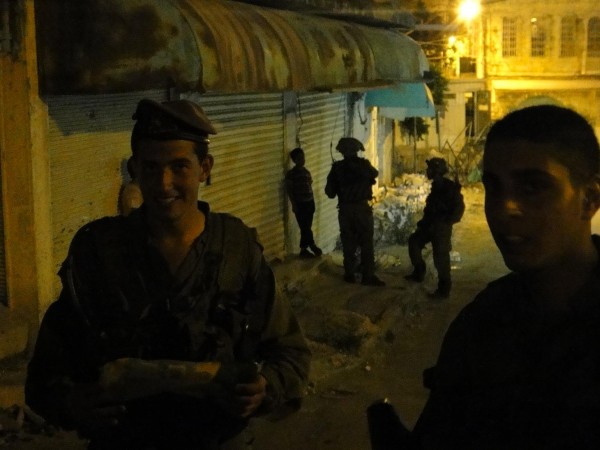 Soldiers smiling – children arrested behind them (Photo by: ISM)

After about 15 minutes we got our passports back and got to the checkpoint to see the children being ‘posted’ back into the Palestinian controlled area and handed to the Palestinian Authority. The whole thing left me feeling sick. The smiles on the faces of the soldiers, the way they thought it was acceptable – or even normal – to hold children against their will at night, their use of intimidation and blatant abuse of power.

It may not seem like it, but these children were lucky – they were not blindfolded or handcuffed, nor were they were beaten or imprisoned. But others are. The children of the West Bank are learning first hand every day about the brutality of the Occupation. But they are also learning how to resist. I hope that their resistance will create a Palestine where children can play in the streets freely and without fear.