Regular updates on harassment of Palestinian schoolchildren by Israeli military in Hebron monitored by the International Solidarity Movement. 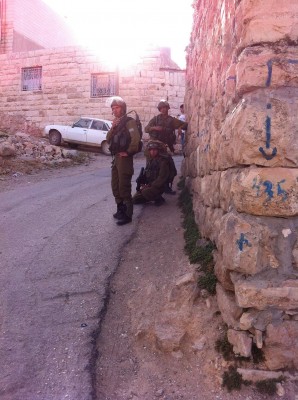 30th May, Soldiers hiding down a side-alley outside the school

30th May: Today was the last day before the summer holidays for some schools in Hebron. Children received their typical morning welcome from 7am, in the form of four military jeeps waiting at the checkpoint and several heavily armed soldiers hiding up a side street. Soldiers intimidated children as they walked past, wearing riot helmets with weapons at the ready.

A settler from one of the illegal settlements in Hebron’s old city then spat in the face of an international observer who had been monitoring the soldiers.

28th May: As the morning began and children were arriving at school for the last of their exams, there was a large military presence awaiting them at the checkpoint. At 7:20am there were three jeeps and twelve soldiers. As children yelled at them from a distance for their constant provocation every morning, the soldiers readied themselves with helmets and weaponry. At 7:25am three soldiers went through the checkpoint, one armed and ready to shoot tear gas and another holding a sound bomb. They stood directly outside the first primary school on the road. 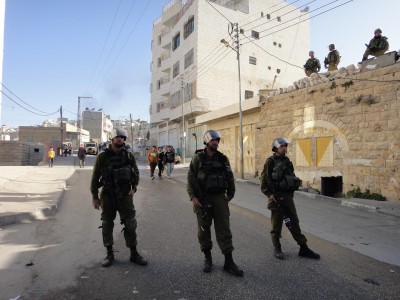 Soldiers situated on roofs and in the road outside schools

Within minutes they were joined by three other soldiers, positioning themselves on the garage roof just opposite the primary school. As the three soldiers on the ground advanced to the front of the second school, the jeeps came through the checkpoint. Two of the jeeps blocked a road just before the schools, turning traffic around, while the soldiers around these jeeps kept threatening, pushing and shouting at children who passed them. Six soldiers kept aggressively advancing, ready to shoot gas and sound grenades at the children, who responded to their flagrant intimidation with rocks. After a long stand off and lots of chanting, the soldiers finally got into their jeeps and drove away at 8:20am.

27th May: Today, Israeli soldiers continued their harassment of Palestinian youth on their way to and from school. Due to exams, several classes of young people aged only 10 to 14 years old left the school early. Some gathered at the opposite end of the road, about 500 metres away from the checkpoint, posing no threat to the Israeli border police. Several young people threw stones which never reached anywhere close to the checkpoint. Nevertheless, two jeeps sped through the checkpoint, and armed Israeli soldiers threw a sound grenade and fired a tear gas canister onto a Palestinian roof. Within a minute, they fired another tear gas canister. They waited and watched for several minutes, and eventually a group of Palestinian adults talked to the soldiers and convinced them to leave. 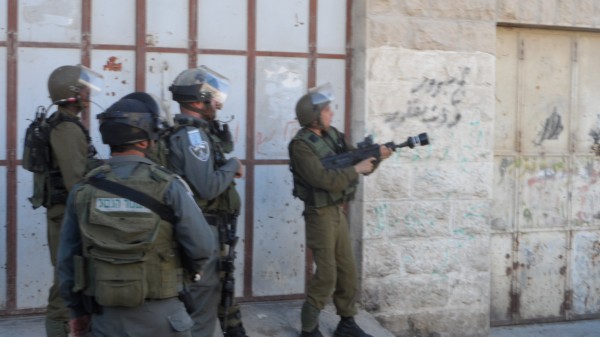 26th May: Two Israeli military jeeps and ten soldiers this morning harassed schoolchildren and teachers preparing for another important school exam day. Soldiers also invaded a Palestinian home near the schools, using the roof as a watchpoint. One stun grenade was thrown by the military. International activists escorted children who had been too terrified to continue their journey to school alone.

21st May: 3 Military vehicles and around 12 Israeli border police / soldiers blocked the road near the entrance to 3 schools as children made their way to class this morning . Soldiers prevented children and teachers from walking to their schools and diverted traffic as others took photo’s of children with their iPhones. At one stage soldiers threw a sound bomb in the direction of a large group of small children. Many of the schools are holding end of year exams today . 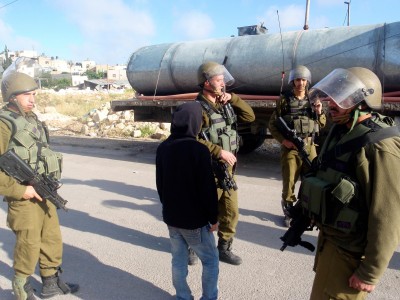 Child being detained by military on the way to school, 16th May

19th May: At 7am three international activists arrived at the checkpoint immediately outside three Palestinian schools. They found that three soldiers had already moved past the checkpoint, an act of provocation in itself . The activists followed the soldiers and watched as the soldiers observed the passing . At Around 7:30 the soldiers noticed smoke and marched towards the school where they discovered a fire burning in a dumpster. It was unclear who started the blaze. The soldiers waited by the dumpster for approximately 30 more minutes. During this time the children began to throw stones from at them from a distance, failing to hit the soldiers. At one point, one soldier returned past the checkpoint to the border police station and came back with three tear gas bombs. A school teacher or administrator approached the soldiers to speak with them and admonished the children to enter their classes. Once the children were safely in the school the soldiers returned to the other side of the checkpoint without incident. Back at the police station, border police harassed youths (between 13 and 15 years old) as they passed. Activists witnessed one police officer kick a child as he finished his inspection

16th May: At around 7.30am two army jeeps and six soldiers on foot walked past the checkpoint towards the schools. One child was surrounded by seven soldiers, one of whom grabbed his arm – when asked by international activists why they had detained him, the soldiers released the child. Two soldiers ran towards the school with their helmets on but stopped before they reached it. Three soldiers standing on a roof pointed their guns down at the children. Soldiers in jeeps took pictures of children on their iphones.

13th May: Five soldiers stationed themselves on roofs overlooking the school whilst four walked down towards the school, waiting on the road. All wore riot gear, including helmets. 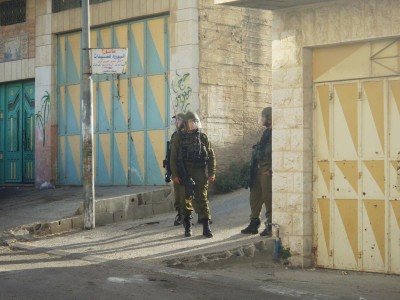 Soldiers pictured shortly after having charged at schoolchildren, yelling and throwing a soundbomb

Children walking past soldiers on their way to school – 7th May.

On the 20th March, 27 children aged 7 to 16 were arrested on their way to school in Hebron’s old city. For the past three days the Israeli military have had a large, heavily armed and threatening presence outside the four schools on this street, where the children were grabbed at random by Israeli soldiers just five weeks ago.

Children have to walk through a checkpoint manned by several Israeli border police each morning in order to reach their schools, often receiving hassle from the soldiers as they do so.
On the morning of the 5th of May, some children threw stones at the checkpoint – in response the border police radioed for army back up and two jeeps arrived on the scene. One jeep then proceeded through the checkpoint driving down towards the school parking outside whilst children were still arriving. After it left the other jeep drove down outside the schools and four army officers exited the vehicle and patrolled outside the schools for another half an hour.

On the 6th May at around 7.00am as children were walking towards their classes, three military jeeps arrived without provocation and ten soldiers patrolled in front of the school, maintaining a presence for over an hour.

On the 7th May two jeeps arrived at the checkpoint and seven soldiers walked through it, towards the schools. When asked what their purpose in the school area was, the commander answered “we’re protecting our people”. They had no further response when it was suggested that their actions seemed absurd, considering the disparity of power between the heavily armed Israeli military occupiers and a few young children throwing stones in resistance.

This daily military presence must be a continual reminder for the children who were arrested and their classmates of the military brutality of the 20th March. One bystander stated “this could inhibit the right to education – children might be too scared to come to school.”

In a city which has seen at least 66 child detentions and arrests since mid-February (these are just those witnessed by international observers), this continued initimidation and persecution of children is evidence of Israel’s disregard for international law for the protection of children – a finding backed up by Unicef’s recent report criticising Israeli military treatment of Palestinian children.