It’s been four years since I had visited and lived in Ni’lin and the decision to visit on Friday filled me simultaneously with excitement and longing but also dread. Four years ago I had supported the non violent resistance in Ni’lin as an ISM activist and had experienced the horror and oppression of the occupiers against such actions. Ni’lin’s demonstrations against the Apartheid Wall represented the Ni’lin population’s resilience. They would not let more land, that was the life blood of the community, be stolen. 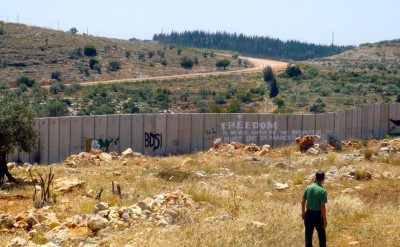 I arrived in the village not knowing what to expect. Four years is a long time and although parts looked familiar everything was also completely different. The town seemed busier and I was surprised to see cash machines in the Baladia (town centre). I felt disorientated as I gazed at the walls that were adorned with advertisements instead of martyr posters. Ni’lin has suffered heavily under the occupation, not just from the loss of land but also the persecution of its non violent resistance. Five shaheeds (martyrs) were killed by the Israeli occupation forces for opposing the Wall. I arrived early and wandered around Ni`lin with a fellow activist to hopefully reconnect with old friends. I had imagined that it would be okay just to turn up for the demonstration but needed time to acknowledge and deal with things that happened during my stay. I walked to the shop to prepare by buying ‘Top Drink’ a hydration must when sampling Ni’lin produce. From there we walked up the hill to the hospital, as I knew that two of the martyrs were buried near there. Four years ago Ni’lin did not just demonstrate against the wall but jumped into action to demonstrate against the slaughter that was taking place in Gaza as part of ‘Operation Cast Lead.’ Ni’lin demonstrated with other Palestinians on everyday of the operation from mid day until sunset. On the 28th of Decenber 2008 20 year old Mohammed Khawaje and 22 year old Arafat Khawaje were shot with live ammunition whilst demonstrating in solidarity with Gaza alongside international and Israeli activists.

The atrocity was just two of the many that happened at the time as international media was focussed on Gaza. The killings were unimaginable to myself and were the reason it took me so long to return to Palestine.
Walking back towards the baladia, we were approached by a young boy who recognised me. This made me very happy and we spoke about his older brother and family who I knew and made arrangements to meet them after the demonstration. The boy was now 10 but was still as happy as he always was. I felt concern for him as he joined the demonstrations fearing for his safety as all Palestinians who participate put themselves in danger. The first martyr from Ni’lin was his age, Ahmed Mousa, who was shot dead at a demonstration on 29th July 2008. At Ahmed’s funeral 17 year old Youssef Amirah was shot dead with a rubber coated steal bullet a day later.

My young friend took me to the demonstration in the olive fields where we passed a martyr poster, the most recent, that I hurtfully found out when checking up on Ni’lin after I had gone back to my country. Yousef ‘Akil’ Srour who was 36 years old when shot with 0.22 live ammunition during a demonstration. 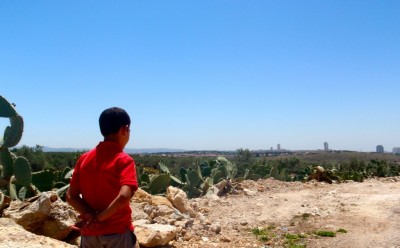 A young demonstrator at Ni`ilin

We proceeded to the demonstration where people came up and welcomed me, hugging me and shaking my hand as I apologised for taking so long to return. After the prayer, we approached the wall, which is now complete. Before 1948 Ni’lin owned 58’000 dunams of land from which 40’000 was stolen by the creation of Israel. The 1967 occupation lead to the construction of the illegal settlements of Nili, Modin ilit, Hashmon’im Mattiyahu that took 8’000 dunams. In 2008, the construction of the Wall stole another 2’500 dunams and a tunnel exclusively for settlers, highlighting the nature of apartheid, 200 dunams. Nearly 90% of Ni’lins original land has been stolen since 1948.

It infuriated and saddened me that the Wall was built after so much tragedy. The demonstrators tried to force open the metal gate as army fired tear gas. I felt very tense and worried during the demonstration, remembering the arsenal of weapons that had been previously used on Ni’lin demonstrations. On this occasion they just fired tear gas, but in the past they used live ammunition, 0.22 live ammunition, rubber and plastic coated steel bullets and the deadly high velocity tear gas canister that critically injured 37 year old Tristan Anderson, an international volunteer, on March 13th 2009 just a week after I left, who needed 15 months of treatment in hospital and has been left permanently disfigured.

I met up with a friend after the demonstration where I met his new brother and sister who had been born during the time I was away. It felt symbolic that he had a brother who was four and a sister of two who played around him, that showed the new life and that there is hope that the future generation need not live in fear. We spoke a lot about the situation and the past whilst drinking coffee and smoking argila. I asked about how the wall had changed life in Ni’lin, but the responses were always optimistic, ‘life is good, life will be better, the wall will fall.’

I said goodbye and promised it would not take four years to return and looked forward to my next visit. 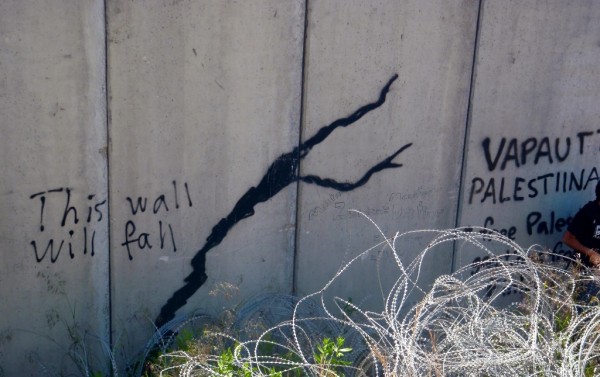 Graffiti on the wall at Ni`ilin