The co-ordinator of Youth Against Settlements Issa Amro was arrested yesterday at the Qiryat Araba settlement in Hebron. He was summoned to the police station at which point he was interrogated and arrested. He is being charged with “Incitement of terrorism” and is being tried today at Ofer prison in Ramallah. 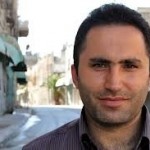 Issa is a prominent activist and organiser of non violent demonstrations in actions in Hebron. He was also arrested several weeks ago along with three internationals and two Palestinians for taking part in a demonstration on Shuhada street where activists walked down the road wearing Martin Luther King and Barack Obama masks to mark the visit of the US president to the West Bank. After his release he was banned from walking in the area of Tel Rumeida for two weeks.