New
Home / Features / The occupations toll on one family in Burqa

The occupations toll on one family in Burqa

A brief visit to any family home in the occupied West Bank is sure to be a combination of warmth and tragedy as no person here has been immune to the brutality of the occupation that has dominated the lives of Palestinians for over 60 years. 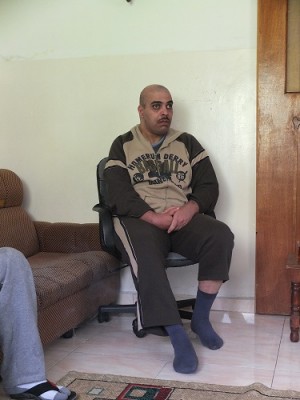 Ra’ed Haj who is unable to walk, talk or hear after he was nerve gassed

In the small village of Burqa near Nablus , we visited the Haj household , where 32 year old Ra’ed has been rendered unable to speak , walk or talk after nerve gas was fired into the bathroom he was washing up in in 2002. The Israeli soldiers reached this bathroom by knocking through wall after wall of neighboring houses, which is common practice for the Israeli Occupation Forces.
Despite also suffering from a brain tumor, Ra’ed has been repeatedly denied permission to seek adequate medical facilities by the Israeli army.

His mother and father now care for him, but worry who will continue to do so in the future. Which relatives will be there to care for him in the future is unpredictable to say the least. His brother Muhammed is currently in the notorious Jalame prison after the Haj household was raided by the army at 2am. He is still awaiting charge or trial. Jalame prison is infamous for its harsh interrogations and solitary confinement in the dark. Muhammed also suffers from regualar migraines after he was shot in the head with a steel coated rubber bullet in 2005. The same illegal ammunition was fired at his friend which took out both of his eyes. In 1994 his home was also demolished to make way for the illegal Homesh settlement.

Wether a resident of Burqa has the absurd luxury of being able to reside in his family home or not, the Israeli army constantly make their presence known by raiding the village nearly every night, making wanton arrests and damaging property. 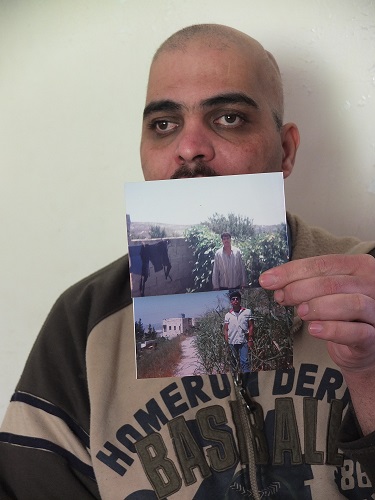 Ra’ed holds up photographs of himself before the attack