In what seems to be a collective punishment for last Saturday´s construction of al-Manateer neighbourhood on privately owned Palestinian land (classified as Area B, according to the Oslo Accords) in Burin, Sunday night saw the Israeli army arrest two young boys from the village.

At around 8:30pm, a supposedly Palestinian ambulance showed up in Burin. Villagers were suspicious as the driver didn’t look entirely like a Palestinian. As young boys realised that the men in the front were plain-clothed Israeli soldiers, clashes erupted between Palestinian youth and soldiers.

Later on, as Ghassan and Mohammad were in a friend’s house, the Israeli special unit, all in black and wearing balaclavas, entered demanding IDs and arrested both men. Ghassan was brought handcuffed and blindfolded to an army jeep and, there, was interrogated by the military commander before being released. In the case of Mohammad, he was taken, also handcuffed and blindfolded, to Huwara military base and then released; not before telling him that he couldn’t take a taxi or otherwise they would arrest him again.

I hate checkpoints forcing us to wait and take long detours. I hate teargas, especially when it leaves me unable to breathe. I hate rubber bullets being fired around me. I hate stunt grenades, especially when they are fired directly at me from a distance of three metres, and the impact makes me fall back over. I hate friends getting pepper-sprayed and nearly arrested. I hate to see fellow demonstrators actually getting arrested, especially after being kicked by several soldiers wearing heavy boots whilst laying on the ground. I hate how the Israeli occupation forces (IOF) and border police treated us today. I hate the human rights violations I witnessed. I hate the hateful behaviour of extremist settlers who severely injured a Palestinian with live ammunition and who cut down a hundred olive trees belonging to Burin villagers. I hate the fact that Palestinians can’t even be safe in their own houses because the army is shooting teargas, rubber bullets and live ammunition all around the village. I hate collective punishment which, by the way, is illegal under international law. I hate the imam having to urge people to pray at home rather than the mosque as it would be too dangerous to go there. I hate this illegal occupation with all its injustice, suffering and human rights abuses.

I love the fact that my friends managed to de-arrest a Palestinian, saving him from what may well have been several years of prison. I love the fact that everyone was generously sharing food and water. I love kind strangers inviting us to their house. I love random people taking us into their houses to protect us from the havoc outside. I love the brave first aid workers who helped so many of us affected by the teargas and those seriously injured, at great personal risks. I love onions and people who give them out to help ease the effects of teargas. I love making new friends. I love how much common suffering can bond people together and bring out the best in humanity. I love the spirit of defiance of the Palestinian people. I love the spirit of unity and determination among the people of Burin. I love hearing that they felt the barrier of fear was broken, and they will continue to resist the illegal occupation.

It has certainly been a crazy, action-filled, emotional, horrifying, uplifiting,… day. I don’t think I’ve ever witnessed this much inhumanity and at the same time so much humanity in a singly day.

Today, the residents of Burin, a village near Nablus in Occupied Palestine, joined by activists from across Palestine as well as a handful of internationals, established the village of Al-Manatir on a hill outside Burin. This is the fourth village in a series of protest encampments, following the establishment of Bab Al-Shams, Bab Al-Karama and Al-Asra last month. 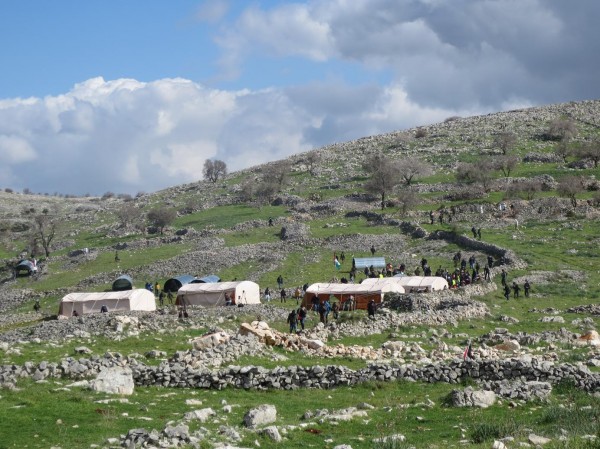 The newly established village of Al-Manatir

The people of Burin have lost much of their land to the nearby illegal Israeli settlements Har Brakha and Yitzhar. Many villagers have lost access to their fields and olive trees and thus their means of livelihood. For years, they have been facing harassment, intimidation and violence by both the settlers and the Israeli army.

Earlier this week, the UN Human Rights Council released its harshest report on Israeli settlements to date, condemning them as “leading to a creeping annexation that prevents the establishment of a contiguous and viable Palestinian state and undermines the right of the Palestinian people to self-determination”. The report also harshly criticises the Israeli authorities for deliberately choosing to ignore rather than punishing settlers’ acts of violence, which it describes as “ institutionalized discrimination against the Palestinian people” with the aim of driving them from their land and expanding settlements. 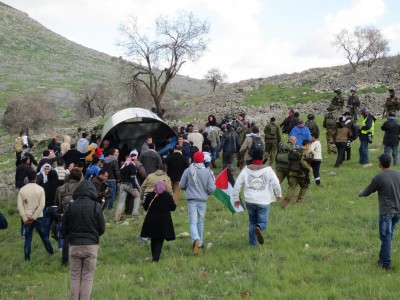 Today, Palestinians joined together to engage in non-violent, direct-action resistance against the illegal occupation and in particular against the settlements. The people of Burin decided to fight back by creating “facts on the ground”, mirroring Israel’s illegal settlement policy.

Along with about 250 people involved in this action, we helped carry material and set up several tent structures on a hill which is village land but has been inaccessible to Palestinians for a number of months due to the illegal settlement of Har Brakha. A handful of soldiers arrived at the scene immediately after the action began, apparently alerted by the settlers. The initial atmosphere among us was full of energy and enthusiasm, as people continued to carry up materials and build tent structures, undeterred by the onlooking soldiers. Among much singing, chanting and flag-waving, the village was officially declared open by Palestinian activist leaders and named Al-Manatir, after the traditional stone huts Palestinians built in their agricultural lands, which were used as shelter for the watchmen of the fields. Gradually, however, IOF reinforcements began to arrive at the scene, as did settlers from Har Brakha. Soon, scuffles broke out between settlers who were clearly mad with rage and determined to tear down newly set-up Al-Manatir and attack us, and the army, who was desperately holding them back to prevent escalation. Following further military reinforcements, most settlers left the scene and instead went to attack a house in Burin itself. Ugly scenes of violent clashes ensued, with the army mostly looking on and doing little to deter the settlers. A 17-year old Palestinian was shot in the leg by live ammunition fired by a settler. 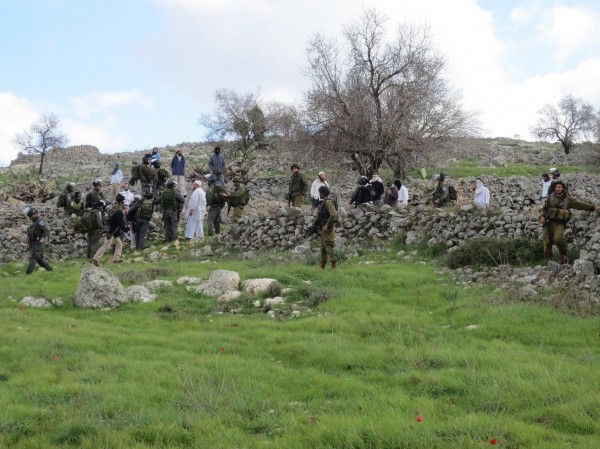 Settlers and the army on the scene

Meanwhile, things were also heating up back in Al-Manatir where soldiers soon began firing teargas, sound grenades and rubber bullets to disperse the crowds. Forced to retreat due to the strong effects of the teargas, we would run back to take cover somewhere and recover from the gas, and then bravely march forward again to face the IOF anew. For a couple to a few minutes we would chant, wave flags and even perform some dabke (traditional Palestinian folk dance), until the army would force us to retreat again by firing stunt grenades and teargas. This pattern continued for about two hours, during which dozens of people were injured, mostly from being hit by teargas canisters and sound grenades, whilst many more severely suffered from the effects of the teargas. Four Palestinians were also arrested; probably the most heart-breaking scene I witnessed today was an activist being brutally dragged away by four soldiers, who repeatedly kicked him with their heavy boots as he lay on the ground near unconscious towards the end. 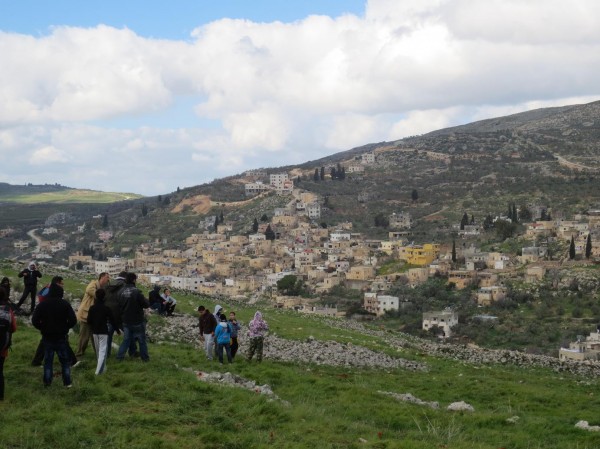 View of Burin from Al-Manatir

The IOF forces became increasingly hostile and aggressive, not only using weapons but also brutally pushing back people and threatening us with arrest, causing some people, especially female residents of Burin, to leave the protest. During the stand-off with the army we were gradually pushed further and further back to the edge of the hill, eventually loosing all our tent structures. A desperate final attempt to hold on to Al-Manatir by sitting down on the ground failed after soldiers threw several sound grenades right at us as we were seated, hitting several of us. My memory becomes slightly shaky at this point, as I was under shock from being hit by a stunt grenade. Quickly, the protest dispersed as those of us still remaining at this point were being forced down the hill under continuous firing of teargas and stunt grenades. 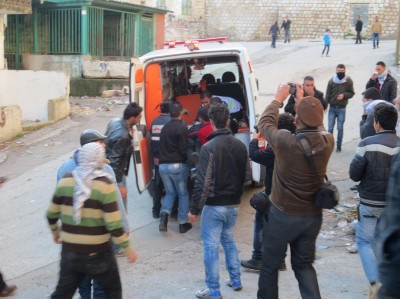 Back down in Burin village, some activists returned home, whilst many decided to stay to show solidarity and offer support and protection should the army or settlers re-attack. We had time to rest a little, introduce ourselves to one another and exchange experiences and opinions on what had just happened. People shared food they had brought, and various kind village folks invited us in for drinks. Although we were exhausted by the intensity of the events and shaken by all that had happened, the overall atmosphere seemed to be one of contentment and pride that we had managed to stand our ground and put up a good fight for a considerable amount of time. We had been sitting on a village family’s veranda, sipping coffee, chatting, exchanging photos and videos for about half an hour, when suddenly a teargas canister landed right in our middle, causing us to quickly jump up and take cover somewhere. What ensued was another couple of hours of fierce attack on Burin village by th IOF. Soon the village mosque was completely filled with teargas after some of its windows were broken by the canisters fired. The whole downtown area soon became inaccessible, and people were forced to leave their houses and take cover somewhere further up in the village. I can’t even begin to imagine what it must be like to not even be able to feel safe in your own home, because any time it could be attacked by soldiers or settlers. Whilst we were sitting out the attack further up in Burin, shebabs threw stones, the army kept firing back teargas and even various rounds of live ammunition, and the ambulance drove around feverishly picking up the injured. After about two hours, the army retreated and people were able to come out of hiding and return to their houses.

What do I take away from this day? To be honest, I will probably need a good few days to really digest all this. However, right now, I feel immense respect for the Palestinian people, their fighting spirit, deep courage and willingness to take great risks as they’re standing up for justice. I feel great hope in the power of non-violent resistance and popular grassroots movements. However, my heart is also heavy at the thought of the repercussions that our action will definitely have for the people of Burin. Already today, one hundred olive trees were cut down in revenge by settlers, and further acts of reprisal will certainly follow. Everyone expects the army to come raid the village tonight, beating up and arresting many residents.

I would like to close my account with the encouraging statement of Ghassan Najar form Burin: “Today Burin has broken the fear barrier: we went to our land despite the military’s orders and we will continue to do so.” May the courage and determination of the people of Burin and all Palestinians continue to grow as they fight the illegal Israeli occupation until victory ensues and peace, dignity and justice triumph in this land.

Katie W. is a volunteer with International Solidarity Movement (name has been changed)