A peaceful demonstration was violently broken up by the Israeli occupation forces using tear gas grenades and canisters, and skunk water. Road opened for the first time in 13 years.

At 1pm around 100 Palestinians marched towards the Hagai road gate in the Al Hareaq area of Hebron. The demonstrators surprised the Israeli army who did not appear to be prepared for the demo, having to bring in reinforcements to the scene. The demonstrators gathered beyond the gate on the side facing the illegal Israeli settlement of Hagai. There was a tense atmosphere as the demonstrators chanted and vented their anger at the illegal road closure. 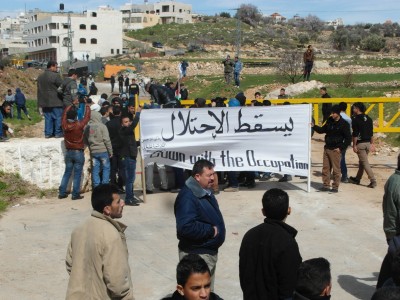 Demonstrators started to dismantle the road gate taking parts of the gate away with them, they then pulled a chain out from within the gate and forced it open. People cheered and danced as this is the first time the road has been opened since it was closed by the Israeli military in 2000.

Soldiers started to throw sound grenades into the crowd who remained steadfast. Then an officer ordered a soldier to throw a tear gas grenade into the crowd. Demonstrators remonstrated with the soldier forcing him to back down. The officer then got another soldier to throw a tear gas grenade directly at a protestor hitting him in the side. After kicking away the tear gas grenade the demonstrators regrouped and continued to protest. Many more tear gas and sound grenades were thrown but the soldiers were unable to disperse the crowd and deny the Palestinians their right to peaceful protest. Three soldiers attempted to arrest a demonstrator at random but people quickly saw the danger and again thwarted the army by affecting a non violent de-arrest. 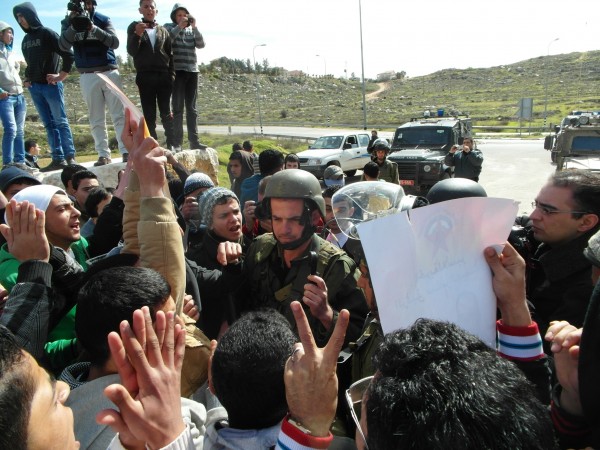 As the demonstration was ending, the Israeli army brought up a skunk truck and sprayed the foul smelling, noxious water at the crowd, also firing a large number of tear gas canisters at people as they were walking away. There were no arrests at the demonstration. 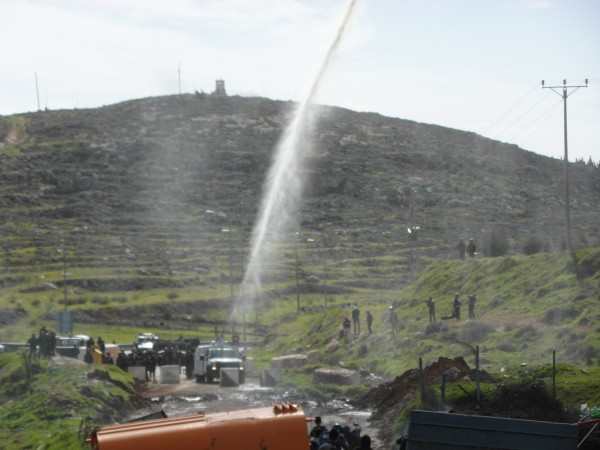 Skunk water is sprayed at the demonstrators

The Israeli occupation forces closed the road in 2000 with large concrete blocks. This prevented access to the south of Hebron from Dura, the close by Al Fawwar refugee camp and many villages in the area south west of Hebron. The barrier cuts off Hebron from over a hundred thousand people. For Palestinians in this area a journey of 5 or 6 minutes to Al Fawwar refugee camp now takes an hour.

Two weeks ago under pressure from the regular Friday demo the army removed the concrete blocks and put a road gate there instead. This is an attempt to show the road can be opened, but control of access would still lie in Israeli hands. In 2000 Israeli military bulldozers built sandhills on the road to further restrict movement. Pipes had been damaged on the road and sewage flowed onto the street, causing a hazard to peoples health. Last week the Hebron municipality mended the pipes and did further work to improve the road. With the weekly demonstrations and pressure on the District Coordination Office, the people southern Hebron, Dura, Al Fawwar and numerous villages in the south Hebron hills feel they may be able to remove this instrument of oppression and open the road for good. 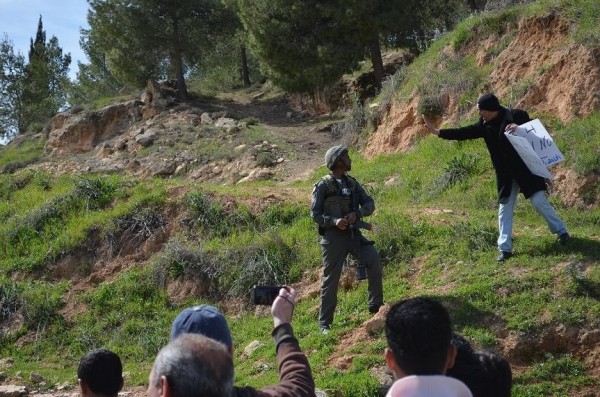 Soldier attempting to arrest another demonstrator