New
Home / In the Media / Al-Manatir: the protest village in occupied territory that was destroyed before it was built

Al-Manatir: the protest village in occupied territory that was destroyed before it was built 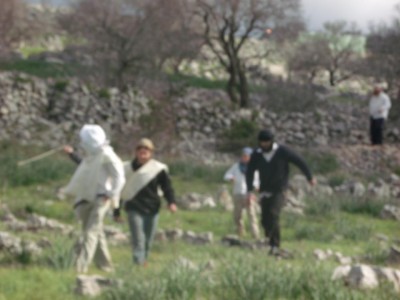 Settler with a slingshot at Al-Manatir (Photo: ISM)

Saturday morning moments after Palestinians planted metal huts and canvas tents on a rocky hilltop in the northern West Bank village of Burin, Israeli settlers were pelting them with rocks. Armed with slingshots and at least one gun the settlers stormed the Palestinians who were setting up a protest encampment similar to Bab al-Shams in the E-1 corridor, the fourth such encampment in the past month.

But the confrontation escalated and the encampment, which was to be named al-Manatir, was never established.

Burin is located in the Nablus governorate, which sees the highest rate of settler violence [PDF] in the West Bank. Attacks are almost daily. There are 12 settlements and 36 outposts in the district, and the outposts are often home to the gun wielding “hilltop youth,” a violent gang of settlers known for “price tag” attacks on both Palestinians and the Israeli military. The volatile atmosphere runs through all of the small villages near Burin. Just a few days ago the International Solidarity Movement highlighted Urif, a village a few kilometers from Burin, noting after two months of habitual settler attacks in December 2012 that 17 women had miscarriages, which they speculated was caused by the harassment.

At 9:30 am Saturday morning around 50 Palestinians went to work erecting tents. By 10 am, many supporters had joined them, bumping the number of protesters to 200. The settlers who live on the next hilltop over were irate; one activist described them as being like enraged mothers flinging their bodies across an army of brutes in order to save their young. She said it was like a movie. But the settlers who were dressed in white with their faces covered, were not striving to keep anything they already owned. Palestinians from Burin have a deed for the land where the protest camp was supposed to extend. And according to villagers, the ownership is not contested by the state of Israel. 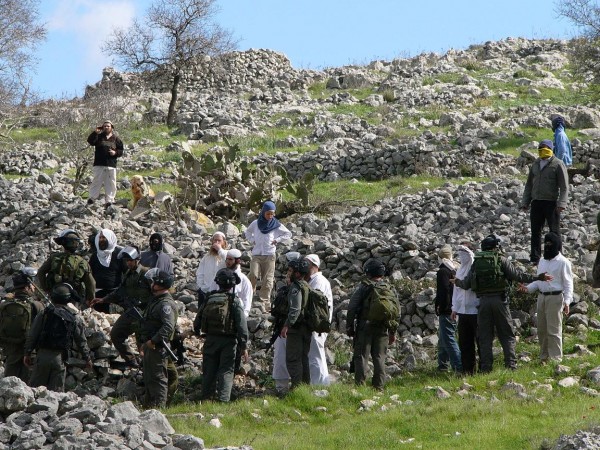 Army trying to keep the settlers at bay in the beginning. (Photo Katie W., ISM)

Initially the Israeli military kept the settlers at bay. Such harassment is common in Burin, but it is atypical for the army to intercede on behalf of Palestinians. However, the reprieve only lasted a half an hour and by noon the settlers snatched two of the Palestinian’s metallic huts and carted them back up the hilltops.

Fadi Quran, a Ramallah based activist, showed me a video of the settlers stealing the shelters while the military watched without reaction. “It’s apartheid, it’s plain to everyone’s eyes,” said Quran, explaining the military’s crackdown on the Palestinians and relative blind-eye to the settlers. ”Here are the soldiers firing at us and here are the settlers carrying the tent up the hill.”

Reflecting the sunlight, the huts looked like miniature Frank Gehry designs bobbing– as far from subversion as the settlers could walk.

Shortly after the shelters were stolen, a group of about 30 settlers ran off towards the outskirts of the Palestinians village and indiscriminately attacked houses. They threw stones and were soon met by Palestinians who tried to protect their neighbors’ homes by throwing rocks at the settlers.

Back at the protest site the military fired tear gas and live bullets. Unlike other direct actions where the Israeli military positions itself at a distance from the protesters and incrementally advances to meet their opposition, in Burin the army fired while swarmed by Palestinians and settlers. With nowhere left to go the Palestinians took cover inside of Burin’s windy streets.

Tear gas choked the entire village by the time I arrived in the late afternoon. One infant had been rushed to a hospital and later a woman in her twenties was driven out after inhaling too much gas. My first interaction with Palestinians inside of Burin was a mother with three young children who jumped in our car for a ride to cleaner air. I dropped them off and then headed towards the chorus of live fire in the center of town, where the organizers were resting.

By nightfall the Palestinians had lost steam. Most people held small cloths to their faces, soaked rubbing alcohol and distributed by the Red Crescent Society; and one activist gripped a halved onion. For some, the entire day had been spent running from the military. In the evening it was unclear what they were still doing in the village. The protest encampment was cleared hours ago and the huts that were salvaged were now abandoned in Burin’s alleyways. The village was also sealed off by a checkpoint, and 18 were arrested and three injured, according to Tweets that same day from activists. The settlers had shot one Palestinian in the leg and destroyed around 100 olive trees. The injured youth, Zakharia Yaser Nijar, 17, a high school student from Burin, was taken to a hospital in Nablus. 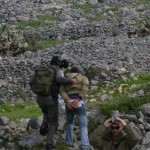 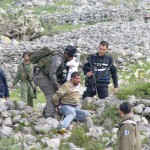 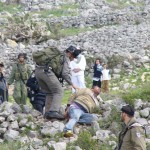 Before leaving, Amar Eid, 19, from Burin, pointed out to me to three different hilltops that have settlers. I asked him the name of the settlements and he laughed and said, “We can’t know all the names. There’s too many.” The settlements of Adei Ad, Bracha, Yitzhar, and Mitzpe encircle the stone and concrete houses of Burin.