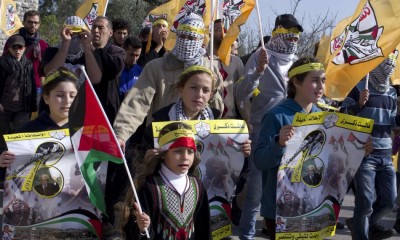 After dreaming of this moment over and over for the past three years, last Friday, 4th January, I was finally able to go to Nabi Saleh’s demonstration and meet its wonderful villagers again.

When we arrived in the village, we went to the main square where Israeli and international activists and people from the village had started to gather after the midday prayers. Some faces were familiar, some were completely new and others were simply missing; arrests and death have passed through Nabi Saleh.

After a short speech and distributing yellow flags and bands of ribbon among the people, the demonstrators started marching down to the main road of the village. They were trying to reach, like every Friday since December 2009, the water springs stolen by the settlers from Hallamish, a settlement nearby, on road 465.

Right after getting to the main road, some shebab (youth) along with Israeli and international activists put a line of rocks across the road so that the army jeeps and skunk water truck could not pass through and invade the village (“skunk” water is a malodorous chemical liquid: if sprayed by it, clothes must be thrown away and the smell stays on, it takes several weeks to go away from skin). 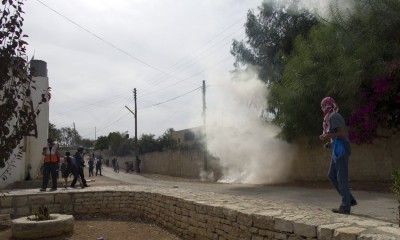 The atmosphere was festive, the shebab singing and dancing on the front line and children running from one place to another. Suddenly, the skunk water truck started spraying towards the demonstrators and soldiers started shooting rubber-coated steel bullets and tear gas canisters into the crowd. The demonstration was soon dispersed all around the village. As some soldiers headed to the hill leading to the village, the shebab spread among the houses and hills; the shooting continued, as did the stone-throwing.

A Palestinian activist was shot in the shoulder with a rubber-coated steel bullet and another was hit in the head, neither of them critically. As the demonstration continued, the Israeli army invaded the village, continuing to shoot.

Whilst we were running from the soldiers, a door suddenly opened and the woman inside said “fadaleh, fadaleh”, and so we went in. Just then, I realized it was the same house and the same woman that provided me with the same shelter almost three years ago in a very similar situation. Then, I was also running from the soldiers and a pregnant woman opened the door of her house and invited me to enter and hide there. I sat down on a sofa and straight away she served me tea and delicious food. Her little daughter offered me a small yellowsmall teddy bear as a present. Yesterday, almost three years later, she welcomed us with the same hospitality and generosity. We stayed in her house for an hour. Her family were there, including her two-year-old daughter with whom she was then pregnant. As we were sitting, soldiers continued to raid the village. Two Israelis and one Palestinian photographer were arrested, and one Palestinian activist was beaten by soldiers and brought to the police station. We still do not know what happened to him.

What I know and see with admiration is that, after three years, Nabi Saleh is still struggling against the occupation, despite multiple arrests, injuries, prison sentences and death. As Bassem Tamimi, now in jail, told me once, “the struggle will continue until the end of the occupation.”

Tagged with: An Nabi Saleh