Nasser Sharabati (16) was shot three times by live ammunition on Thursday night during clashes in Hebron. He in Hebron’s hospital and in a critical condition. Around 90 people were injured and had to receive hospital treatment. It is evident that Israeli army snipers were firing to cause maximum injury.

On another day of clashes between the Israeli army  and Palestinian youth, Nasser Sharabati was shot in the chest, side and arm with three rounds of live ammunition. The clashes in the city began in the Bab Al-Zawiya area of the city centre around half past one in the afternoon. The Israeli military fired large amounts of tear gas and rubber coated steel bullets into this shopping area causing great distress to many people, the vast majority of whom were not involved in the clashes. Shops and businesses had to hurriedly close as the whole area was disrupted. 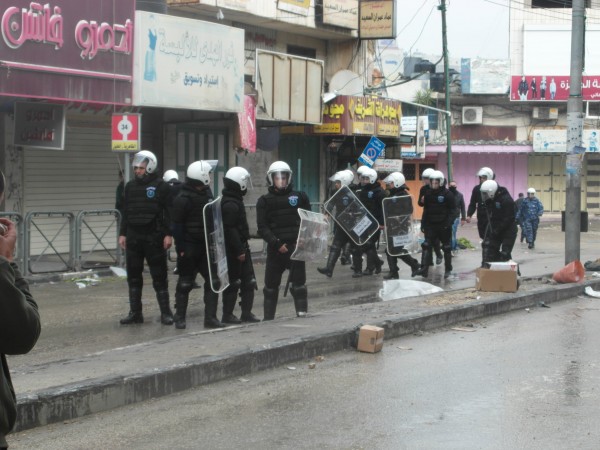 Palestinian police in the streets of Hebron

At around half past two the Palestinian police drove inbetween the Israeli military and the Palestinian youth. They got out of their vehicles and a uniformed officer backed up by police in riot gear tried to talk the crowd out of confronting the heavily armed soldiers. Only the previous evening however Mohammad Zaid Awwad Salayme had been murdered in Hebron by the Israeli military. The passionate and indignant Palestinian youth were intent on defending their city from yet another incursion into the Palestinian-controlled H1 area of the city by the Israeli army and the attempt was unsuccessful. The Palestinian police withdrew and the clashes resumed with increased intensity. Massive amounts of tear gas and rubber coated steel bullets were now fired by the soldiers.

In a worrying new development snipers taking up prone positions on the Palestinian streets were deployed by the Israeli military. It was clear that these snipers were firing to cause maximum injury, to maim and even kill the Palestinian teenagers and children that confronted them. Undaunted the Palestinian youth defended their territory and the stuggle continued for several hours into the evening. Sometime between 8 pm and 9 pm Nasser Sharabati was struck by three live rounds, was critically injured and taken to hospital. Reports suggest up to 10 people were injured by live ammunition during the day. Nasser Sharabati was operated on and the hospital issued a call for blood donations on the local radio to which many people responded. Around 90 people suffered injury or problems from tear gas inhilation and had to recieve hospital treatment. Nasser Sharabati remains in a critical condition at the hospital in Hebron.

It is clear that the Israeli army has decided that increased and lethal force against teenagers and children defending their streets is an acceptable way to enforce their illegal occupation of Palestine. 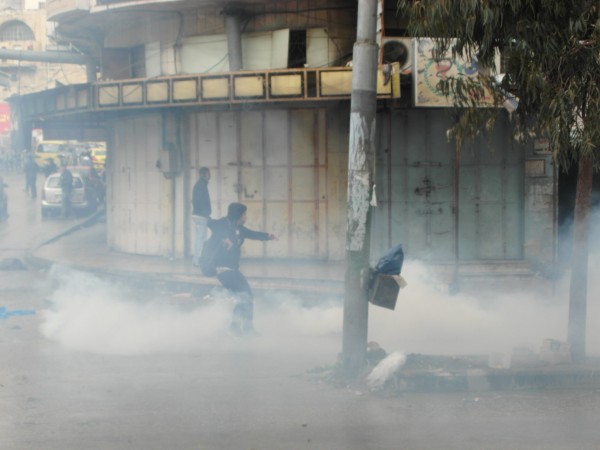 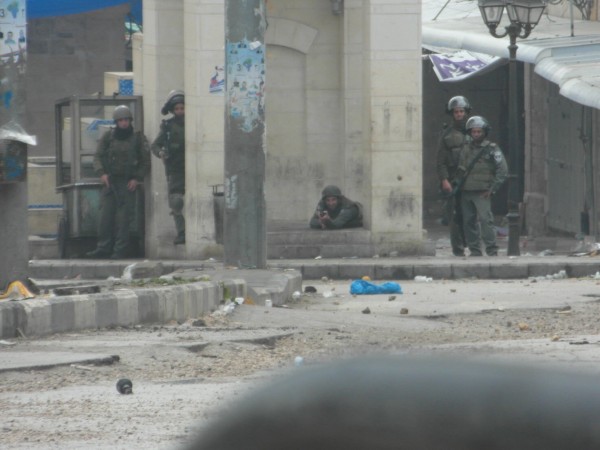 Israeli soldiers taking up prone positions on the streets in Hebron