New
Home / Journals / Reflections on a brief exchange in the aftermath of a home demolition, 4 December 2012

Reflections on a brief exchange in the aftermath of a home demolition, 4 December 2012

The pain and anguish on the woman’s face was penetrating. Earlier this morning two Israeli military jeeps, one civil administration vehicle, and a bulldozer had arrived at her home with orders to level the structure. This is in spite of ongoing legal proceedings seeking to preserve the home. The modest twenty square meter home was erected by the owners of the land in November of 2011. Just three days after the building was complete, the Israeli Civil Administration arrived and informed the owners that the structure was not permissible due to their failure to acquire appropriate building permits. But as these civil servants knew full well, for Palestinians acquiring building permits is no simple matter. 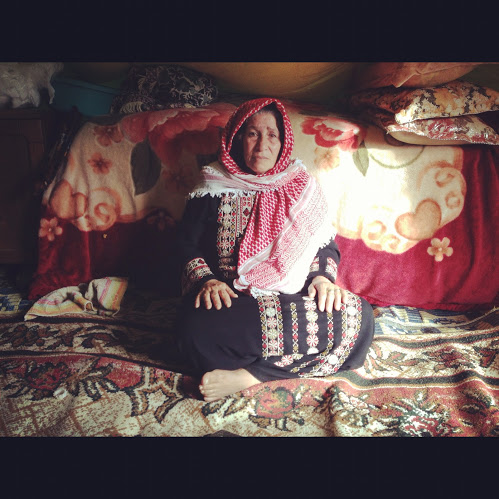 A Bedouin woman whose home has been demolished

The family lives in a small Bedouin village part of Aqraba, located in what is known as Area C of the Jordan Valley, a category designating territories within the West Bank which are formally under full Israeli civil and military control (as determined in the Oslo Accords). According to the Mayor, Israel is engaged in a systematic process of clearing the area of its inhabitants so that its fertile land can be appropriated for agriculture uses by nearby settlements.

This project of enclosure has caused persistent problems for the Palestinian Bedouin community living in the West Bank. Through a combination of complex bureaucratic hurdles and systematic discrimination, Israel routinely denies these communities the right to develop structures on their own property. When they take matters into their own hands (as they must to survive), Israel responds with more blunt forms of dispossession, today’s demolition being a case in point.

With the destruction of the home, the family was in desperate need of shelter. Members of the community, including civic leaders from the town of Aqraba, lent a hand in erecting a tent that would serve as their new home. A torrential downpour soon descended upon us, forcing everyone to seek temporary cover. Perhaps this was an ominous sign of the coming seasonal change and the challenges the family will inevitably face. Inside the tent, following the arrival of the Red Crescent Disaster Response division on the scene, an account of what transpired in the course of the demolition began to be recorded. Questions were primarily directed at the male owner of the home and the village mayor who was present to lend support for the family. Shortly after the rain relented, the folks inside the tent went outside and began assembling a second tent.

The building destroyed by the Israeli military was home to a family of five, and these simple tents will now serve as their only refuge from the elements. In the course of the demolition, the bulldozer also destroyed their toilet facilities and the electrical wires running to the nearby building that housed the kitchen, though those who gathered to assist the family were at least able to repair the damaged electrical wires. In addition, they also leveled a tent structure used to shield barley that serves as food for their livestock.

I sat quietly inside the tent with the woman and she poured me a second cup of tea. I watched her as she stared at the pile of rubble that was once her home, before turning her eyes to perform a visual survey of her belongings now huddled inside the tent. David and Andrea soon joined us, grabbing a seat on the single-sized bed pushed against the backside of the tent. Through Andrea’s knowledge of Arabic, we managed to engage in some simple conversation with the woman. During this brief exchange the woman revealed her pain and fears, and as she spoke tears began rolling down her cheeks. She indicated that her health and well-being were worrisome, and that being exposed to the elements like this would undoubtedly mean a turn for the worse. In a searing display of vulnerability, she said that with the destruction of her home she had nothing left to live for and now simply awaits her death. While this testimony proved tear-jerking and heart-wrenching, it was accompanied by a humbling display of compassion. Our new friend exuded a warmth and generosity that conveyed an underlying resilient spirit, bringing to life the maxim that ‘existence is resistance’. She extended sincere gratitude for our presence, calming the tensions I felt about being an onlooker to another’s misery. She patiently fielded our questions and provided poignant accounts of what this experience meant to her. At the conclusion of our exchange she said that we were like sons to her, and may god bless us.

Our powerful encounter with this 58-year-old woman occurred by mere chance, but reveals something profound about the concept of grass-roots democracy. So often we look to people of stature for insights and detail, erringly overlooking the wisdom embedded in the experiential knowledge of those most marginalized and often neglected. As an international, I often struggle to determine what it is I need to communicate to people upon returning home. Without a doubt the injustices I have witnessed deserve special attention, but perhaps just as important are the simple acts of humanity I have encountered. For within this one woman’s warmth and resilience are the seeds necessary for cultivating a better world. 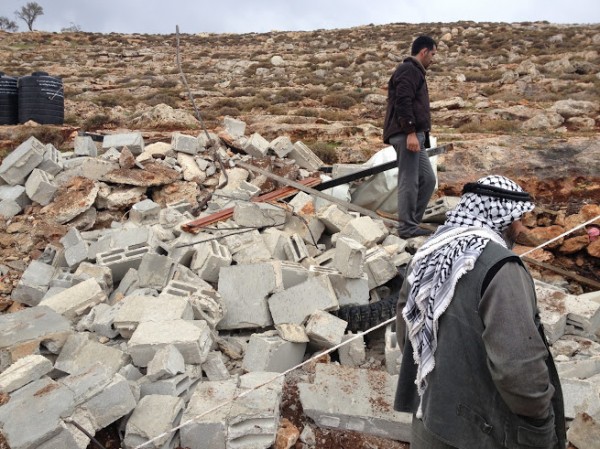 The remains of the home which has been demolished 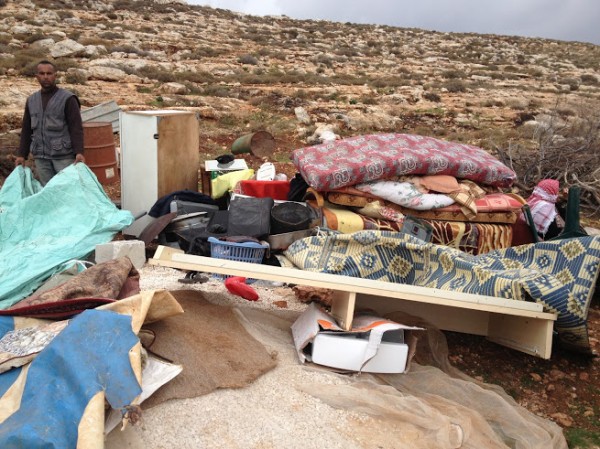 Putting up a tent where the family will live

Jeff Berryhill and David Langstaff are volunteers with the International solidarity movement.