Thousands of zionists occupy Hebron – harassment, abuse and restriction of movement for Palestinians

Thousands of fundamentalist Israeli tourists from around the world arrived into Al Khalil (Hebron) on Friday, camping overnight in the centre of the city for a Jewish religious holiday. One Palestinian was punched and kicked and hundreds were denied access to daily life as settlers invaded the old city for five hours.

The thousands of Israeli tourists, who gathered in al-Khalil for two days, were gathered for the Zionist holiday, Abraham Day.

For the duration of the zionist visit, movement was even more restricted than usual for Palestinians – considering that in Al-Khalil there are already 113 checkpoints, roadblocks and closures. In the hilltop Palestinian neighborhood of Tel Rumeida, Palestinians were not allowed to walk their regular route down a gradual slope, as a Jewish cemetery is situated there. Residents, including one pregnant woman, were ordered by Israeli soldiers to walk down a dangerously steep hill.

Palestinians and international activists were not permitted to enter the vicinity of the Ibrahimi Mosque. When asked if this meant that only Jewish people had rights in the area, an Israeli policeman blocking the route replied “yes”, confirming the apartheid agenda of the Israeli authorities. The only two remaining Palestinian shops in the area were forced to close down for the two days of the zionist visit, and a checkpoint at the entrance to the Palestinian souq was completely shut down, making access very difficult.

The zionist visitors on the other hand were accommodated fully in their movement during their time in Al-Khalil and were in fact facilitated on tours of the souq. On Saturday morning, the souq was invaded by groups of over twenty soldiers on several occasions in preparation for these tours. Heavily-armed soldiers pointed guns through doorways and down alleyways in the market, intimidating shopping Palestinian families and children. Soldiers were then stationed in doorways and alleyways along the main path of the souq and remained there for many hours, blocking Palestinian access and once again, restricting movement.

After these preparations had been completed, the tours commenced. A tour for Israeli settlers happens every Saturday in the souq, on a much smaller scale – these are ostensibly regular guided tours, providing information about the area. The majority of the groups this Saturday however, seemed to aim only to be as loud and obnoxious as possible, obstructing Palestinian life and claiming that the souq should be a Jewish area.

Between the hours of one and five, hundreds of settlers were led repeatedly through the market, accompanied by over 30 soldiers each time. The groups were highly disorderly, shouting and chanting pro-Israel slogans and often threatening and yelling abuse at Palestinian shopkeepers and international observers as they passed. Several observers, Palestinian and international, were attacked for recording the disrespectful behavior of the crowd – cameras were grabbed, knocked to the ground and damaged. One Palestinian man was punched and kicked for trying to film as the group passed by him in the souq.

Merchandise and fresh produce were purposefully damaged and Palestinians were stopped from walking past the tour groups, or were forced to squeeze through the narrow gap between the wall and the crowds of sometimes aggressive zionists. One group’s guide pointed at a Palestinian flag in the souq and stated that it was “a flag of foreign anarchists and outside forces.”

There is a history of settler violence and restriction of movement for Palestinians in Al-Khalil, a city which is divided into Palestinian zone H1 and Israeli controlled H2, which includes the old city. The latter still has a majority Palestinian population of around 30,000, with around 700 Israeli settlers. The huge Israeli army presence within the city is justified by the presence of these settlers, whose residency is illegal under the Geneva Convention which states that “transfers of the civilian population of the occupying power into the occupied territory, regardless whether forcible or voluntary, are prohibited.”

An ex-Israeli soldier who was stationed in Al-Khalil claimed to Breaking the Silence that the mission statement of his unit was “to disrupt the routine of the inhabitants of the neighborhood”. This aim is being continually fulfilled by settlers, zionist visitors and the Israeli army. Despite this, the Palestinian population remain steadfast in their homes and continue to resist the occupation. While zionist tourists paraded through the souq one shopkeeper responded by waving her keffiyeh and blowing a trumpet in response to the harassment. 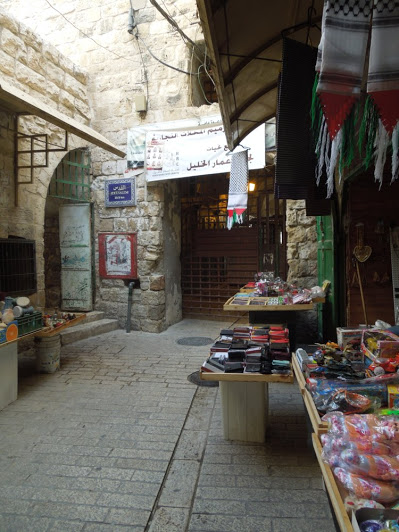 Checkpoint from the souq to the Ibrahimi Mosque closed down, severely restricting Palestinian movement 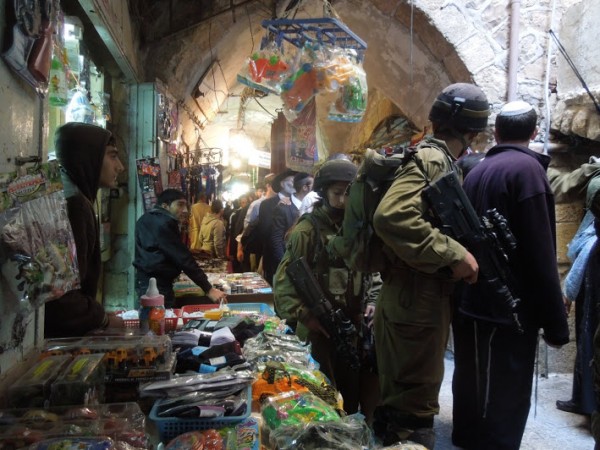 Palestinian shopkeepers look on as soldiers and Zionist tourists pass by 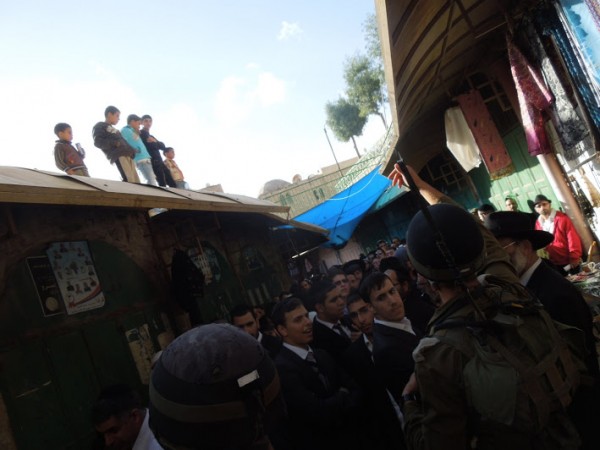 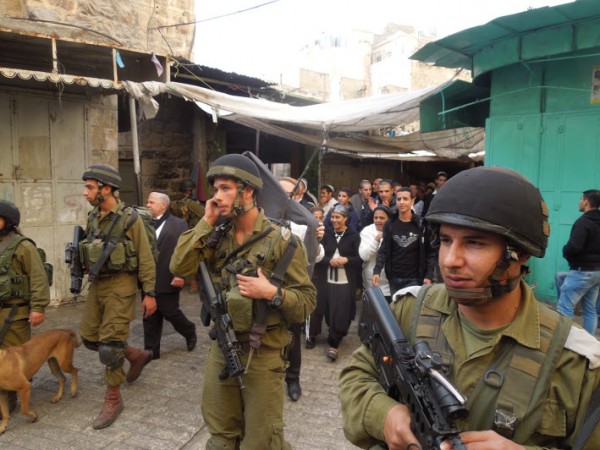