During her arrest, Elyana received blows to her head and injuries to her neck by four Israeli police officers who dragged her from the scene of the non-violent demonstration. Her hands were bound from the point of her arrest until many hours later in the evening – she is still suffering from limited circulation to her hands. She has been shackled hand and foot during transportation.

A police officer threatened to pepper spray her, before forcefully grabbing her and shoving her into a car to be transported to immigration detention – after a judge had ordered that she and the other international activist be released. Elyana was laughed at and ignored by Israeli authorities when she repeatedly demanded her right to be able to contact her lawyer by phone. Thankfully, she has now had access to legal advice.

For the first hours of her detention, Elyana was held with Bassem Tamimi, organizer of the regular demonstration in Nabi Saleh. She reported that he was suffering major damage to his ribs, and could not breathe or speak without severe pain. Elyana demanded to be taken to a hospital so that Bassem would receive the medical attention that he required – he was eventually treated and bandaged.

Elyana has chosen to fight the unjust and illegal deportation that Israel has begun against her, so will remain in immigration detention until she can be seen by the court. Saeed Yakeen, one of the Palestinian men arrested at the peaceful demonstration has now been released. Bassem Tamimi remains in prison, as does a Polish activist, who is also facing deportation.

Israeli authorities are threatening to deport two international activists, arrested yesterday at a non-violent action at a settlement supermarket, despite a judge ruling that they should be released. They are currently being held in immigration detention.

Earlier today, defense lawyers were informed that a judge had ruled that they should be freed without charge, but this ruling was ignored by Israeli police, who handed the two activists to the Ministry of Interior, to begin the deportation process. They could be flown back to their home countries within hours, despite never having been charged, let alone convicted of any crime. They have also been repeatedly denied contact with their lawyer.

Substantial legal costs have already been incurred. If they choose to fight this unjust deportation, then these will be even higher. We urgently need funds to challenge the Israeli tactic of deporting solidarity activists to prevent our work in the West Bank.

Please donate now so that we can continue our work supporting the Palestinian cause. 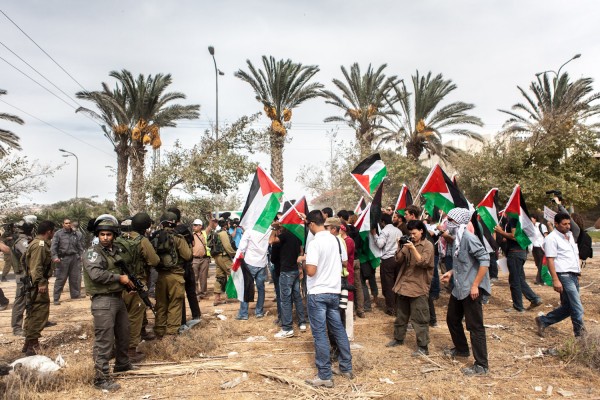 Palestinians and Internationals at the peaceful direct action in an Israeli supermarket near the illegal settlement of Shaar Binyami where the 2 Internationals were arrested along with 2 Palestinian men.

Dozens of Palestinians and internationals protest at Rami Levy Supermarket near the illegal settlement of Sha´ar Benyamin on October 24th. This direct action aims to highlight the Boycott-Divestment-Sanctions (BDS) Campaign that seeks to promote a boycott of Israeli goods.