The Israeli air force has conducted several air raids at night starting on the 12th of October, and ending on the morning of the 13th.

“I felt a huge explosion at midnight while in a cafè with some friends. The first attack hit a Hamas military base north of Gaza City (in Nafaq street). Later, empty spaces in the refugee camps of Al Bureij and Nuseirat were hit, in the central Gaza Strip. Military aircraft continued to fly sporadically that night.
At 3:20pm on the 13th I heard another huge explosion caused by an Israeli strike on a site belonging to the resistance, north of Gaza City.
F-16 fighters flew for at least half an hour longer. An attack was also reported in an uninhabited area in the Bedouin village Um Al Nasser in Beit Lahia, which is located in the northern Gaza Strip. Later I learned that in this area the shelling had damaged a kindergarten.
Israeli forces have subsequently claimed to have struck, “a site of terrorist activity in the northern Gaza Strip and two others in the central area”. Given that they are centers for the Palestinian resistance and that terrorism is daily implemented by the Israeli army with  attacks by sea, air and/or by land, this statement is false. The objectives that were hit are sites of the resistance,  north of Gaza City, but are also vacant spaces in the central area. In addition to these attacks took place in Beit Lahia. These statements, which have been copied by the Italian media are patently incorrect and are useful to specifically justify the attacks.

With the idea to show what happened during that evening, there was a consultation with centers for human rights and other local contacts. Today I went in the village of Um Al Nasser to photograph the damaged kindergarten.
I discovered that the ‘Um Al-Nasser kindergarten was built through the project “Education for Peace and Architecture in the Gaza Strip” that had been promoted by the Italian NGO Vento di Terra, and financed by Italian Government Cooperation.
I went there with a Palestinian activist, we were accompanied by local people to visit the inside of the kindergarten. The walls have cracks and some pieces have fallen. 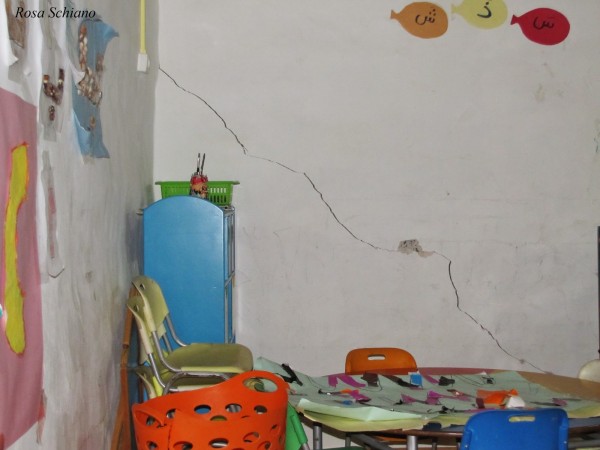 Then the village men met with us outside to see the cavity in the ground caused by the bomb dropped from an F-16. The bomb was dropped near the nursery, where there is also an agricultural land and a chicken farm.
I must admit that I risked a lot to be in that place at such a late hour, it was about 6:00 to 6:30 in the evening. Drones flew over us while we were in the agricultural land about 700 meters from the border with Israel.

“Get away from us, if they hit, they will hit the entire group,” said the Palestinian activist.
At such times it is difficult to remain focused-

It was completely dark, the only light was on a  cell phone. I did not want to be separated from other people and at the same time I contemplated my own personal survival. I began to imagine our bodies suddenly reduced to pieces. Nausea and dizziness encroached upon me, as drones continued to be there… right on top of us.
I took pictures quickly on the spot where  the bomb exploded and on the outside walls of the asylum. I just had to do this work, then I would go. I would do this in spite of my fingers trembling on the camera.
-Luckily everything went well this time.

We also found pieces of the bomb. Once we left the kindergarten we visited a house nearby damaged by the attack. Abu Idrees Sharikh, age 52, told us that the attack occurred around 1:45 at night. He invited us to come in and began to point out the cracks on the walls of his home caused by the explosion. She told me that her daughter, Sabrin, age 16, is shocked and unable to speak. Their family is originally from Ashkelon. The families of this Bedouin village are extremely poor and live under constant threat of air strikes. They are refugees yet they do not receive any services from UNRWA because it does not consider the area included among those to receive aid. The village of Um Al Nasser is definitely one of the worst areas of the Gaza Strip concerning living conditions.

I left and went back to Gaza City.
I went to an outdoor cafè for a moment of calm. I hoped I could connect my computer and start working, but suddenly I heard an explosion at about 20:15.
There is no peace.
An Israeli raid killed two men on a motorcycle in Massoud street in Jabalia, north of Gaza City.

The first man died on the spot, Fayeq Abu Jazar, he arrived at the hospital without a head. The second man, in critical condition, died later in the hospital. Hesham Ali Su’eidani, age 43, was the leader of the Salafist group. Hesham Ali Su’eidani was also the leader of the Salafist whose release had been asked by the killers of Vittorio Arrigoni.
A second attack at about 8:30 am hit the Zaytoun neighborhood in Gaza City where there is a site of Al Qassam Brigades, which is the armed wing of Hamas. No injuries were reported.”