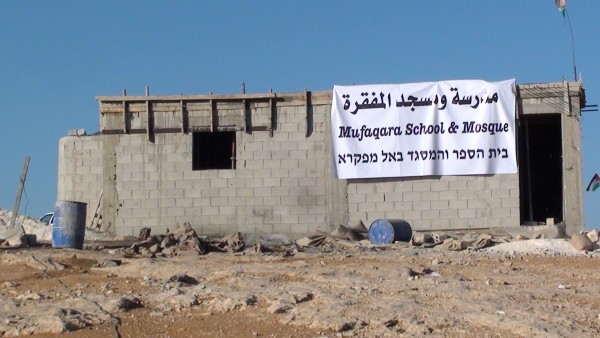 At one in the afternoon on Monday, the 8th of October, we received a call in Arabic:

“We have big problems. Can you come?”

Two calls later and we were on our way. We reached al-Tawani in a service taxi. Along with two volunteers from Operation Dove, we walked up the hill to al-Mufaqarah.

Al-Mufaqarah is a beautiful village with about a dozen families, some brick houses, some tents, and some prefabricated dwellings provided by the United Nations. On the hill in front of us we saw a series of entrances to caves with stone walls that complement the houses. They were once inhabited, but it seems that since the evacuation of the village in 1999 they have not been used.

As soon as it got dark, we realized that there is no electricity. We heard a generator supplying power for the evening, and we remember that just a year ago they were putting poles up with the purpose to bring electricity here from the grid. The army demolished these poles however, and now this village is again a target. This time, the occupation forces are setting their sites on the construction of a mosque and a school.

On Monday morning, a jeep from the Israeli occupation forces arrived with an order to stop any construction work. “We will check if you continue,” they said. “And we will proceed to arrest those responsible.”

When we arrived, we found a group assembled in a tent. The decisions about what actions to take had already been made, and now they explained their plan of action to the internationals that had been called to help.

The villagers explained that the Israeli laws are unjust. How is it possible that in the illegal settlements there are all facilities available: running water, light, schools, but the Palestinians are not permitted these services? How can they not even have their own place of worship?

“We do not accept Israeli law,” they said. “So tonight we will continue the work on the mosque.”

They would continue laying the concrete slabs on the construction site.

Meanwhile, they organized their efforts. Officially, when the army was there, all the equipment was removed from the construction site: the pile of rubble and cement was covered and hidden. But they also prepared two tractors with attached trailers that would move into the town from two different directions: one with a hoist and planks to walk on the slabs, the other with sand and a mixer. The tractors would converge at the construction site later.

We received information that there was a checkpoint at the exit of Yatta, but fortunately the tractors laden with the building materials were already on their way. The hoist was assembled and put into place, and we all took a quick pause for dinner. As we ate, a cold wind rose up and cleared the clouds of the day from the sky, giving way to a great starry sky. When it was dark, we started our work.

The sand and the mixer arrived, along with the building team from Yatta. Four people were there to load sand and gravel into the mixer. Another added water and put in the bags of cement. Another worker maneuvered the mixer and elevator, and four more worked to level the concrete.

Anytime we saw lights of a car passing on the road, the work slowed down and our lights for work were extinguished. Finally, the work was done without intervention from the army. By half past ten in the evening, everybody was enjoying tea.

Perhaps in the future, Israeli occupation forces will demolish the mosque; it has happened before in this village. But for now, al-Mufaraqah has a victory. The village shows great determination and will not give up!