In the afternoon of Tuesday, 11 September 2012, settlers from the illegal Israeli settlement of Yitzhar burned farmers’ land containing almond trees in the Palestinian village of Burin.

Around 10 settlers came down from the nearby settlement of Yitzhar and started to burn the trees; when Palestinian shepherds came to investigate the fires they returned quickly to the settlement. They were guarded by security officers as they watched from above.. The firemen arrived within several minutes and were successful in their efforts to control the fires. After one hour the Israeli army, Israeli Disctrict Coordination Offices (DCO) and border police arrived. 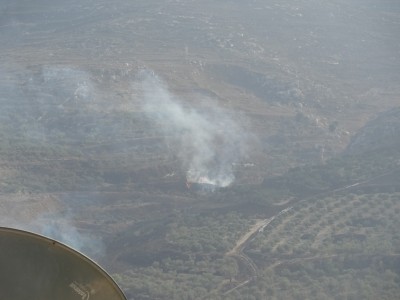 Land belonging to villagers from Burin burns as firefighters struggle to put it out.

This small village of approximately 3,000 people deal with a constant threat of settler attacks and Israeli army harassment.  Two illegal settlements and one illegal outpost surround Burin: Yitzhar, Bracha, and Givt Arousa.  The residents of these illegal colonies make it clear that they will do whatever it takes to force the Palestinians out of their homes. Their criminal acts range from burning olive trees, to shooting home made rockets at the village. In 2011, approximately 4000 trees were destroyed, burned and uprooted, by the settlers’ violence. 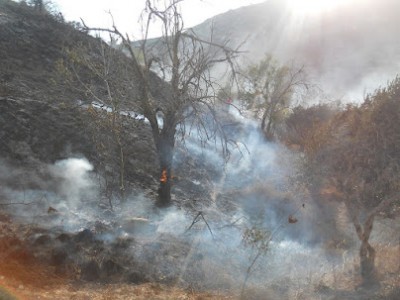