On Friday 7th September myself and four other international activists attended the weekly demonstration against the apartheid wall in the village of Ni’lin. Since 2004 the villagers of Ni’lin have been non violently protesting against the annexation of their lands. So far the village has lost over 50,000 dunum (1 dunum = .1 hectare) of land, in part to surrounding illegal settlements and in part annexed from the village in the construction of the apartheid wall. Saeed Amireh, member of the Ni’lin popular committee explains that the confiscation of the land and colonization of the West Bank with illegal Israeli settlements are calculated methods designed to expel the Palestinians from the land. Many of the inhabitants in Ni’lin rely on the farm land and in particular the ancient olive trees for their livelihood. 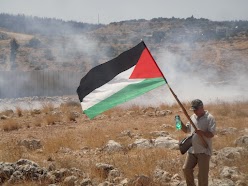 Protestor stands with Palestinian flag as tear gas moves across the land.

This Friday was the first demonstration with an international presence for three weeks. Saeed says that the presence of internationals is vital to the resistance in Ni’lin and is glad to give us a talk after the demonstration, explaining the history of Ni’lin. The demonstration began after the midday prayers which waft from the mosque and through the fields lined with olive and carob trees, under which we wait. We walk through the fields alongside the villagers and children who carry Palestinian flags and a megaphone. Along the way the shabab (young people) pick up tires and stuff them with straw and dry grass. The wall which cuts through the rocky valley is made of concrete blocks, barbed wire and electric fence. There, the soldiers are waiting expectantly in the midday sun, their helmets and guns glinting like the backs of well armored insects. Even before we reach the wall the soldiers of the Israeli Army begin to fire rounds of tear gas and spray the land with skunk water. The shabab are not deterred, they set the tires alight at the base of the wall and the flames further blacken the already charred concrete blocks. Fire weakens the wall and makes it easier to remove, Saeed explains. This was how, in November 2009 – on the 20th anniversary of the fall of the Berlin Wall – Ni’lin became the first village to succeed in removing a piece of the apartheid wall. The demonstration lasts for an hour, and as we leave the Israeli Army continue firing tear gas canisters into the field. 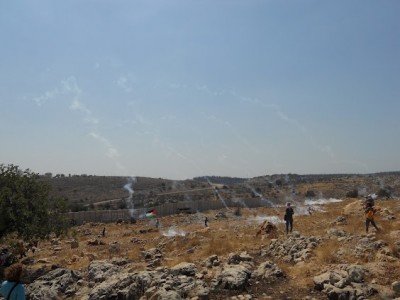 Tear gas falls on Ni’ilin during weekly demonstration against the annexation wall.

This week’s demonstration has been smaller than most weeks as strikes against the PA have been a distraction for many of the usual attendees. However the people of Ni’lin remain positive that their non violent resistance to the occupation will succeed, that the wall will fall, piece by piece and that they will be able to access their land again.

Saeed Amireh, of the Ni’lin popular committee, has been working to raise international awareness of Ni’lin’s struggle against the occupation. www.nilin-village.org

Anna is a volunteer with the International Solidarity Movement (name has been changed).