I am writing to you from an apartment in Tel Aviv where I am under house arrest for standing in solidarity with Palestinians fighting a twelve-year road closure in their West Bank town of Kufr Qeddoum.

This weekend, I spent forty eight hours in Israeli prisons. I was denied access to medicine, kept for long periods in leg and wrist shackles and prevented from calling a lawyer or my embassy; but this is light treatment compared to the punishment meted out to Palestinians who resist the illegal occupation of their land.

Both Majd and Abdelateef were arrested alongside my fellow peace activists and me. Our charges are the same; the “evidence” against us is the same. The difference is that we were brought to a civilian court in roughly twenty four hours; they are still awaiting their hearing in a military court on Thursday.

We were released within sixteen hours of our court hearing and are under house arrest until Sunday, at which time, we will be free to go. Majd and Abdelateef however, will likely spend the next twelve to twenty months in administrative detention in Israel.

The judge in our case found the charges brought against us by the military to be doubtful… will Majd and Abdelateef receive the same verdict? We must demand their immediate release now!

On Friday, September 21st, three British peace activists and I, along with Majd and Abdelateef, were taken into custody by Israeli occupation forces while we attended a demonstration in the village of Kufr Qeddoum, west of Nablus. Soldiers entered the village from the north and east, fired tear gas bombs at protesters and broke windows in a school.

The soldiers kicked, beat and choked two of my fellow peace activists before forcing them into an army transport vehicle. As I passively resisted the soldiers’ attempts to arrest me and ziptie my wrists, they bruised my arms, stepped on my feet, and threatened to pepper spray my eyes. The soldiers also threatened my colleague and I with the armored bulldozer that was moving on the road in the village.

Soldiers bound the wrists of Majd and Abdelateef in tight zipties and they were not allowed to talk to one another.

After our arrest, we were taken to a nearby settlement. While the internationals were searched, soldiers took Majd and Abdelateef separately into an armored military transport vehicle for what they called “medical examinations.” Soldiers then blindfolded the men and we were transported to a police station where we spent the next eight hours.

During that time, both Palestinians remained bound and unable to talk to each other or us. The soldiers made them sit in the sun. When we demanded that they be moved, the soldiers moved them to the shade briefly and then moved them around the corner so we could not see them.

Majd and Abdelateef were forced to wear blindfolds for many hours until sunset. We repeatedly told the soldiers that sensory deprivation was a form of torture and was therefore illegal under international law. When one of my colleagues informed a soldier that even having knowledge of torture of prisoners and not doing anything about it was illegal, the soldier replied, “Fine, then. I’m a torturer.”

The racist attitude of the soldiers toward Palestinians was clear when one turned to my colleague and, motioning to the men said, “Don’t you have enough of these in your country?”

Again the bigotry and malevolence was plain when the soldiers took Majd and Abdelateef away from the police station. We demanded to know where they were being taken and said that we did wanted to go along with them. One soldier turned to us and said, “Shut the f— up! I will f— you up! You want to go to prison?! They will rape you there!”

This type of attitude, as well as the abusive treatment of Palestinian prisoners by Israeli authorities must end! We urge you now to call you senators, representatives, and politicians all over the world to demand an end to release Majd and Abdelateef immediately.

Majd and Abdelateef are currently awaiting a hearing in a military court on Thursday. They are not alone.

The people of Kufr Qeddoum village have been holding demonstrations every Friday for the last year. They are protesting the twelve-year closure of the most direct route from their village to the nearby city of Nablus. The closure turns what would be a one and a half kilometer journey into a fifteen kilometer journey.

Though the road is closed to Palestinians, it is open to Israelis, particularly residents of the three illegal settlements to the east of Kufr Qeddoum, one of which, Qedumim, expropriates even the name of the Palestinians’ land.

Pressure from the Israeli occupation forces on the villagers to end the weekly protest has been building in recent weeks. In the last two weeks, soldiers have invaded the village prior to the protest, creating havoc among residents. Two weeks ago, soldiers prevented people from going to the mosque for Friday prayers. The army has also come into the village during the night with jeeps and tear gas to arrest people for taking part in earlier protests.

Right now, my colleagues and I are safe in Tel Aviv. We were arrested on the false charges of being in a closed military zone and throwing stones at soldiers. The soldiers made no announcements about the closed military zone (CMZ) before arresting us, and refused to show us any documentation of the declaration of a CMZ at the time of our arrest.

And I’m sure this goes without saying: we weren’t throwing stones.

The soldiers handed us over to the police who charged us, separated men from women, took us to separate jails and held us overnight and throughout Saturday. When we appeared in court on Saturday night, the state announced that they wanted to hold us in detention for seven days with the intention of discovering our identities and then handing us over to immigration authorities for deportation. They accused us of being in the Occupied Territories “specifically to disturb the peace” and said that we had kept the soldiers from “doing their jobs.”

Though our friends from Anarchists Against the Wall arranged for us to have an English-speaking lawyer and a translator, the hearing was completely in Hebrew. After the judge rendered her decision, we were not allowed to talk with our lawyer and were not given a copy of the ruling.

After the ruling, we were confused about our status. Though our lawyer successfully argued for us to remain under house arrest in Tel Aviv for seven days instead of going to prison, we were not immediately released because the judge gave the police twelve hours to determine the status of our visas. When, at three o’clock in the morning on Sunday, we were moved to a federal prison and told we’d be taken to another court at 6.30am, we feared the Israelis were about to begin deportation proceedings against us.

So far, that has not happened, though it remains a possibility. On Sunday, we were taken to a police station where our visas were verified and we were identified, photographed and fingerprinted. We signed for a bail of two thousand skekels each and were released into the custody of a friend with Israeli citizenship. Unless we are deported, we will be released on Sunday at four o’clock in the afternoon.

We are being hosted and given much support and comfort by members and friends of the Israeli organization Anarchists Against the Wall ( www.awalls.org ). We are very grateful for their help and generosity.

Thank you very much for your concern and support during this time. My fellow peace activists and I are united in the belief that our inconvenience is a small sacrifice compared to the risk and injustice our Palestinian comrades face daily as they resist the Israeli occupation. If our experience can be used to shed light on the struggle against apartheid, then that experience is no burden.

In solidarity and peace 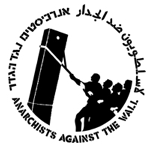 Tagged with: Anarchists Against the Wall Arrests Demonstration Prisoner