Saturday evening, around 6pm, a group of illegal Israeli settlers move through the Old City of Palestinian Al Khalil (Hebron). They are both surrounded and fortified by Israeli soldiers. On paper, this tour through is a supposed “ultimate family experience in Israel“. In reality however, families should be steering clear. This tour is living proof that apartheid is not something of the past. 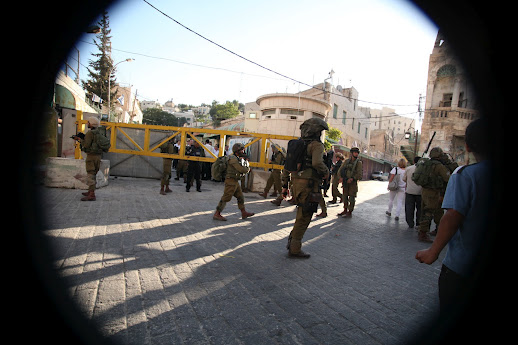 ‘Settler tours’ are guided tours throughout the Old City of Hebron, where settlers can take a walk – enforced by soldiers and police armed to the teeth. At given places, the guide tells stories about historical circumstances in and around Hebron, more or less based on biased historical views.

In 1994, the Palestinian city of Hebron was divided into 2 zones. H1 area is under Palestinian Authority control, while H2 area harbours illegal Israeli settlers within central Hebron. During the second intifada that began in 2000, more than 337 days of curfew for the Palestinians were proclaimed in H2. Today, any Palestinian entering the zone must go through check-points.

The ancient Old City centre contains, like in many other Arabic states, tightly packed and roofed alleys with small shops on either side. Hebron is different. During the morning prayers in 1994, an Israeli settler massacred almost 30 Palestinians as they prayed in the sacred Ibrahimi Mosque. As a result, Israeli forces punished the Palestinian population by closing a great deal of Palestinian shops and homes and seriously strangling a vital and once-lively Palestinian trade.

The settler tour passes through both the closed (for Palestinians) and still open part of the city centre. It is in the latter part that problems often arise, when settlers attack Palestinians and their property with impunity under protection of the Israeli military soldiers.

The ‘security’ seems flawless. The young Israeli soldiers slowly move through the tight allies while securing (pointing their guns at) the small shops, side alleys, and small box windows. They step into this everyday market as though it is a minefield. Always surrounded by army, the settlers and tourists listen to the guide who gesticulates and energetically runs around and explains the city’s history from a Zionist perspective. Around the city, Israel has hung specific Hebrew signs, again reinforcing the biased view of the city’s rich religious history.

The first Israeli settlement in Hebron was established in a hotel in 1968, one year after Israel had occupied the West Bank in the Six-Day War. An Israeli family simply proclaimed that they did not intend to leave the hotel room that they had rented. Ever.

A short time after, they were visited by distinguished members of the Israeli Knesset. The army supplied them with weaponry and training.

Later the hotel building was cleared of the settlers, but the problem had just begun. In 1971, the first families moved in to the settlement Qiryat Arba, not far from Hebron. In 1984, the Israeli Knesset approved the establishment of settlements in the heart of Hebron, in which up to that point had only been occupied by people from Qiryat Arba. 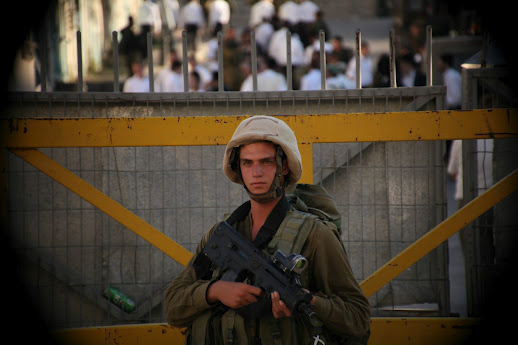 With a mixture of touristic astonishment and glaring confrontational faces, the group of neatly dressed settlers are now standing in the middle of the relatively empty street. 30 minutes earlier the area was full of life and noises. Everyone with knowledge of an Arabic souq, or market, knows what that means. It can seem hypnotic, fantastic, and stressful. But as the tour makes its way through, the atmosphere turns surreal and strangely silent. Now only the growling guttural ‘R’s and instructive arrogant voice of the guide bounces between the old stone walls.

The second-class status of the Palestinians is painfully clear in situations like this. They are not allowed to walk by on their own roads and must patiently wait until the propaganda-machine has finished it’s work. A young boy joins the waiting group of Palestinians and looks up questioningly. He retires to the curb. His sudden change of plans has come about knowing the risks if he were to pass on to the road.

Harassing the shop-owners and bystanders is a common occurrence with settler-tours. Muhammad, who is often inviting internationals for a chat and tea in his little sand glass shop, explains how settlers passing by smashed his inventory on previous occasions. Protected by the Israeli army, the settlers, who face impunity under Israeli law, seem to see no other objection to such actions. The certainty of fatal consequences or unnecessary attention from the occupation forces restrains victims from seeking justice.

Fortunately the settlers do not smash anything this time and keep relatively calm. Soldiers on the other hand seem extremely nervous, which contributes to the tense atmosphere. This new battalion has only just arrived to the city as a part of their 3 months duty. Many have hardly celebrated their 20th birthday. It is possibly their first time outside the military base. Eyes glance shiftily from their commanding officer to surroundings and back again. The sweat drips from the chin, runs down the gun, past the handle and the moist index finger, resting disturbingly close to the trigger.

The guide continues undeterred, while the whole situation seems to open doors and bring memories from a world that no one thought world reappear. None mentioned – None forgotten.

The guided group moves at an agitating snail-speed through the narrow streets. The language is mainly Hebrew but sometimes a muffled American voice reveals tourists or visiting Jews, strolling along, possibly feeling inspired to settle down and test their luck in this religious center.

Israel encourages Jews in the ‘diaspora’ to move here. Rising housing expenses and lack of space in Israel makes the illegal settlements throughout the West Bank an obvious and welcoming choice for newcomers. The Israeli state provides financial support as well as guaranteed housing. As a result more than 50% of the occupied West Bank is now annexed and designed for Israelis and Israelis to come, in direct contradiction with international law.

Back in the Old City, the tour is coming to an end. The group is channelled through a military roadblock and a massive iron gate closes behind them. They are now in the H2-area. Palestinians living there are subject to thorough searches before they are allowed in their own neighbourhood. Everyday life is imbued with security and control.

A few soldiers stay outside the gates. In a little while they are ordered back in to the ‘secure area’ and life will continue in the old city of Hebron, only interrupted by regular patrols. In a weeks time however, apartheid-tourists will once again come back to remind us that 1948 was indeed a catastrophic year.