On May 26, the village of Urif, south of Nablus, was attacked by Israeli settlers from the illegal Yitzhar settlement. Extensive amounts of agricultural land belonging to Urif were burned and settlers threw stones and shot live ammunition at civilians from the village. A Palestinian man was shot with live ammunition in the abdomen and a Franco-British volunteer with the International Solidarity Movement was injured by a tear gas canister.

The attack began around 1p.m. with shooting coming from a hill east to the village, nearby to a Palestinian secondary school. After one and a half hours the settlers appeared on the opposite side of the valley and began again to fire. It was during this attack that a young Palestinian man was shot and seriously injured. Urif residents carried him down the hill towards an ambulance that took him immediately to Rafadiyah hospital in Nablus. Israeli soldiers witnessed the attack from the top of one of hills, yet did not intervene. 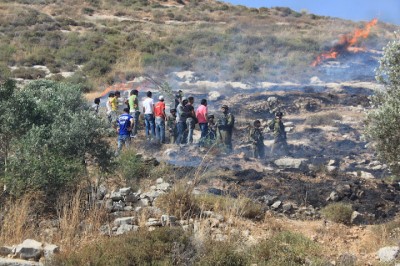 Urif’s residents attempted to climb the hill to put out fires that the settlers had started. They were confronted by heavily armed Israeli soldiers who prevented them from reaching the fires. Soldiers fired live ammunition into the air and fired blanks at the crowd of unarmed civilians. They then left the area in two armoured jeeps. Other soldiers who were positioned atop the hill, continued to monitor the Palestinians who managed to climb the hill and were attempting to put out the fires.

After one hour the settlers started a new fire on another hill near the settlement. The soldiers prevented the Palestinians from climbing the hill to put out the fires, but allowed the settlers a free pass to throw stones at the young Palestinians and internationals below them on the hill.

The Palestinians moved towards the hill where the the secondary school stands. A group of speeding Israeli army jeeps almost ran over a group of young Palestinian men and the soldiers and some settlers stood waiting for them on this hill. The Israeli military continued to shoot excessive amounts of tear gas. A Franco-British activist was injured in the leg after being struck by a tear gas canister.

Tear gas was fired at the residential area, and many households including women and children were affected.

Urif’s residents were unable to be precise as to the number of Israeli settlers that attacked the village since there were multiple attacks throughout the afternoon. A conservative estimate of 100 settlers was given.

The casualties were high. One Palestinian man is currently still in hospital after being shot by a settler in the kidney. The Franco-British volunteer shot in the leg required medical treatment and is still unable to walk without assistance. Several individuals required treatment for tear gas inhalation, including one in particular who reacted severely to the gas due to their asthma.

Illegal settlers from the Yitzhar colony were also responsible for the attack on Asira al-Qibliyah last week, wherein a Palestinian was shot in the head.

Tete is a volunteer with the International Solidarity Movement (name has been changed).