Tel Rumeida: Child settler violence through the lenses of an international activist 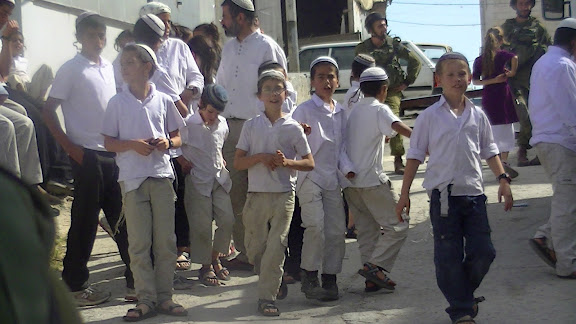 A group of approximately 10 to 15 soldiers displayed their ineptitude in dealing with a group of rowdy settler children, roughly between the ages of 8 to 14, who were attemptng to enter Tel Rumeida.

It was an embarrassing episode for the Israeli occupation soldiers who paid more attention to ISM volunteers who were simply filming the situation.  When a settler later confronted me, violently grabbing for my camera, the soldier’s attempts to restrain him were meek and pathetic. It was an emabrassing situation which showed signs of settlers being allowed to behave as they wish with impunity, behaviour which would not be tolerated if it came from the Palestinian side.

As I walked down Tel Rumeida with another ISM volunteer, we were approached by a Palestinian child who claimed to have been confronted by a group of settler children. As we walked to find out what was going on, we found a group of 20 settler children between the ages of 8 to 14, the majority being boys, acting in a rowdy fashion near the junction where H2 meets H1. Surrounding them were roughly a group of 10 to 12 Israeli soldiers.

As we approached the scene, I witnessed several of the children who could not have been more than 10 years old walking in the direction of the barrier separating H1 from H2. If the soldiers were attempting to stop these children, then their efforts were meek, as the children merely brushed aside the soldiers.

As we questioned the soldiers regarding the situation, they shunned us away by replying, “You dont need to know, go away.” As we continued to question them  they continued to ignore us. 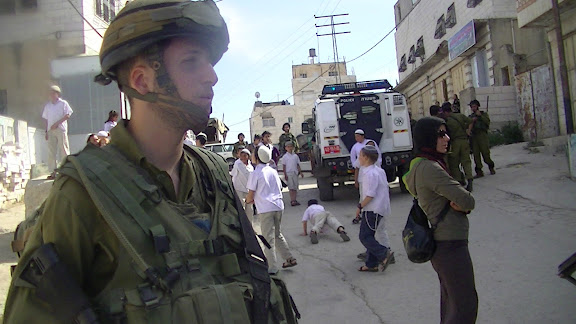 As the problem continued, the children became more boisterous,  challenging the soldiers’ authority when ordered not to walk in the direction of the barrier. As the soldiers formed a line blocking their path, the children easily walked through the gaps.

As the soldiers were ineffective in blocking them off they reformed the line right in front of the barrier. Their tactics proved to be worthless as some of the children were seen getting really close to the yellow gate. The occupation forces had absolutely no control of a situation created by a group of misguided children.

While this was going on, Palestinians who were looking on from outside their homes, stared in disbelief as the soldiers showed no signs of being in control of the situation.

As we filmed the behaviour, the children came in our direction attempting to snatch our cameras and our keffiyahs, or traditional Palestinian scarves. As we looked to the soldiers expecting them to intervene, they turned a blind eye and instead they demanded that we switch off our cameras. When asked why they are incapable of dispersing the children, as usual they hesitated and chose the “I dont have to answer any question” stance.

Seconds later an elderly female settler arrived at the scene and marched towards the soldiers. As she approached them she began speaking to them in an extremely aggressive tone even at times pointing her finger in their faces.  She directed her verbal onslaught at the soldiers for a full five minutes after she herself was prevented from entering H1. She continued her verbal barrage without being reprimanded for her behaviour.

As my colleague and I were filming the scenes, we were continuously told to switch off our cameras and move away. As we asked them why they were so keen to remove us and not the settlers, the soldiers began filming us and one soldier had pushed away my colleague.

We refused to move from our position.

As the female settler retreated she walked past me referring to me as “garbage” and telling me “to go back to your own country and help your own people.”

As the settlers dispersed from the location they headed towards Gilbert Checkpoint, we followed them to ensure no further troubles took place. As we caught up with them many of the kids were seen confronting a lone Palestinian woman. There were approximately 5 to six soldiers at the scene who chose to ignore the problem.

As the settlers made there way back into the illegal settlements, we stayed at the location. Three minutes later more settlers were seen walking down Tel Rumeida from a distance heading towards us. One of the settler men, as they came near, was seen confronting a Palestinian man. He had to be discouraged by an Israeli soldier. As I began filming, the settler ran towards me at full speed, violently shoving the camera out of the way. He then confronted me in order to intimidate me. As I began filming again, he continued to grab for my camera, becoming more and more aggressive at the same time. A soldier at this point had attempted to intervene,  but he used less than minimal force in attempting to restrain the man as he continued to threaten me, and reach for my camera.

The soldier finally managed to convince the settler to calm down and walk away, while I, doing nothing wrong, was told to shut off my camera. As he walked away towards the illegal Zionist settlements, so did the others. The soldiers remained to ensure there was no further breach of peace.

Although it was all over. The occupation forces may have believed that they had successfully managed to control the problem. However this was not the case. Imagine the scenario if a group of Palestinian children had attempted to walk into the illegal settlement?

Despite the aggression of the settlers, what appears to be more worrying in this case is the younger settlers: the children. One of the local Palestinian families who have had their rooftop occupied by the Israeli occupation forces have been the victims of a number of attacks coming from young settler girls between the ages of 10 to 12. The children are taught from a very young age to be hateful towards the Palestinians. The hard right, fundamentalist, and Zionist principles passed on from generations clearly shine through these children when considering the events on Tel Rumeida.

Sunny is a volunteer with International Solidarity Movement (name has been changed).