New
Home / Gaza / Gaza: The march for prisoners within a prison

Gaza: The march for prisoners within a prison 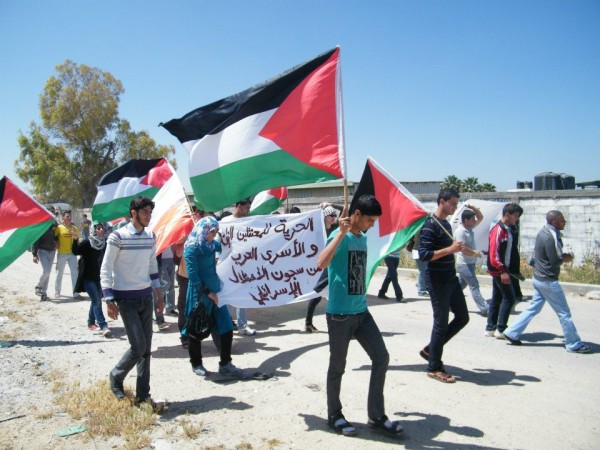 April 17th is Palestinain Prisoners Day.  All over Palestine demonstrations were held in solidarity with the approximately 5,000 prisoners still held in the occupations jails.  Bait Hanoun was no exception, this week the weekly demonstration against the occupation and the no go zones were in support of the prisoners.  The residents of the prison that is Gaza demonstrated in solidarity with the residents of the other Israeli prisons.

We gathered on the road in front of the half destroyed Bait Hanoun Agricultural College.  There were about 50 of us, members of the Bait Hanoun Local Initiative, the International Solidarity Movement, other international activists, and a small group of local high school students who had just got out of school.  We could hear the drone of jets overhead.  We raised our banners and flags, began to play music over the megaphone and started to walk down the road into the no go zone.  At the edge of the no go zone we paused, a bucket of paint was produced and we all marked a banner comparing the Gaza Ghetto to the Warsaw Ghetto with our finger prints.  As we did this a giant white observation balloon began to rise over the wall in front of us. 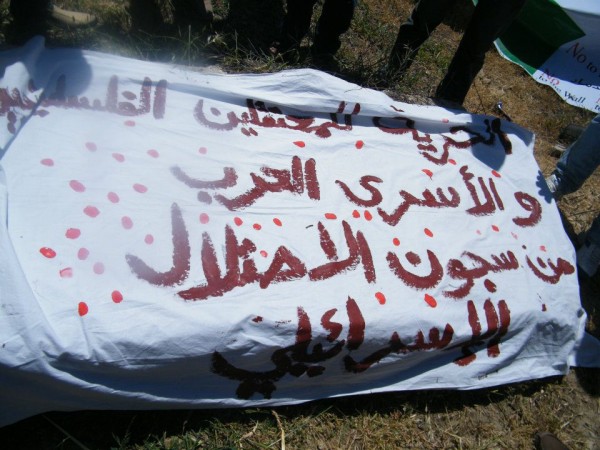 The balloon completed the picture of Gaza as a prison, surrounded by no go zones where Israel routinely kills anyone who enters them, its air filled with drones which routinely murder people, its sea patrolled by Israeli warships which fire daily at fisherman trying to feed their families, even a giant underground metal wall under the border with Egypt.  Israel is proud that it does not have the death penalty, but it would be unnecessary in any case: trials are not considered necessary precursors to the murder of Palestinians.

From the extrajudicial executions carried out by drones in Gaza to the murder of Palestinians in Israeli custody, such as the Bus 300 affair, to the “confirming the kill” murder of an already injured 10 year old Imam Darweesh Al Hams, to dumping sick prisoners by sides of the roads in the to die like Omar Abu Aruban, Israel kills Palestinians without the need of courts, not even the need of courts like the apartheid courts of Israel with 99.7% conviction rates for Palestinians.

We raised our banner again and continued to walk into the no go zone into land where Israel has already declared we need no trial, where the death penalty has already been approved for us.  We walked through the shoulder high thistles that have grown up in place of the orchards that used to grow here, that obscure whatever stones might mark the houses that used to be here before Israel ethnically cleansed the area.  We walked on paths that we had worn on our previous demonstrations.  We walked until we reached the ditch that bisects the no go zone.

Saber Zaneen from the Local Initiative of Bait Hanoun said “We would like to welcome Hanna Shalabi to Gaza.  We will contine to struggle until all of our prisoners are released.  We will never forget our prisoners, Khaddar Adman, Mustafa Bargouthi, Aziz Dweik, Ahmed Saadat, and many others.  They will never be forgotten.”

A Polish activist spoke when Saber was finished. “We are here today in solidarity with the Palestinian prisoners, their sacrifices for freedom inspire us all.”

As we made our way back to Bait Hanoun we paused by the edge of the no go zone.  We sat down by some giant concrete blocks which we had painted with Palestinian flags in an earlier demonstration.  Abu Isa began to sing.  He was singing songs for the prisoners.  A cameraman kneeled in front of him, filming while Abu Isa  sang.  While everyone in the circle clapped in time, Abu Isa leaned forward and began to play the drums on the metal helmet of the cameraman.  Everyone began to laugh, even the cameraman had a big smile on his face when he got up.  We were all alive, still trapped in the prison that is Gaza, still living under the occupation, but still human, still able to laugh.  Israeli prisons have failed just as surely as the “Break Their Bones” strategy did at crushing the Palestinian struggle for freedom.  Israeli prisons are brutal places of torture, bad food, and denial of family visits. But prisons also serve universities for the struggle, a place for people to learn more about how and what they are fighting for.  Hundreds upon hundreds of thousands of Palestinians have gone through Israeli prisons. They were marching with us today.