Idhna: A family without windows

After three years of marriage Amani and Hussein Batran wanted a house of their own, somewhere to raise their two children, 4 year old Khalil and 3 year old Layali.   They took out two loans from the bank and construction began. Now, three years later, the house is still unfinished and no new work has been done for over a year. One year ago, shortly after the Batran family moved into their nearly finished house, they received an order from the Israeli military forbidding further construction, followed seven months later by a demolition order.  The reason given is that their house blocks the view of a camera mounted on the illegal segregation wall Israel has constructed inside of the West Bank. 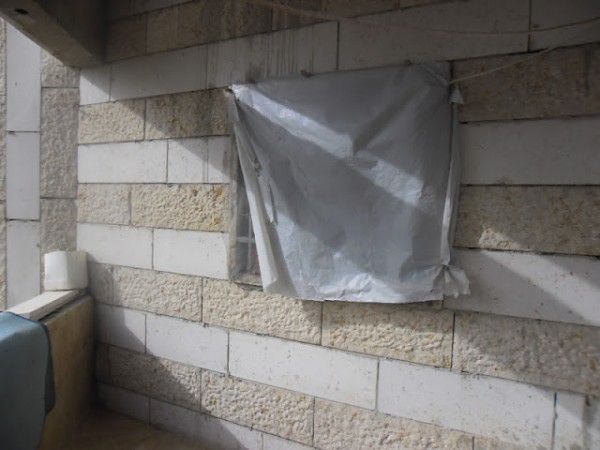 Without windows in Idhna – Click here for more photos

The sight of glass-less windows and wires protruding from half-sanded walls speaks of dreams put on hold, a family living in limbo. The Batrani family has endured the bitter cold of this Palestinian winter with only plastic sheets covering their windows.  The Israeli government considers installing glass  a violation of the order to halt construction.   Violating the order means risking imminent demolition of their home, so the family must make do with  the inadequate plastic sheets.

They know their fate will likely be the same as Ahmed Jeyowi and his family, whether or not they obey the order to halt construction.  Jeyowi’s home was demolished last month when around 50 Israeli soldiers stormed the house at 6 AM whilst Ahmed was drinking tea and preparing to work his land. The soldiers forced Ahmed’s wife and six children from their beds and gave the family no time to salvage their possessions before they demolished their home.

Ahmed has since been forced to send his wife and children to live with other family members whilst he lives on the ruined site which once was his home, now replaced by a tent provided by the Red Cross. Ahmed is left with no heating or lighting, no gas, no toilet, and insufficient bedding.

Idna has suffered considerably since the Israeli occupation, particularly due to the construction of the segregation wall and the theft of some 3,000 dunums of land since the second Intifada. Idhna is surrounded by the Israeli settlements of Adora and Telem to the northeast, a bypass road that runs through the northern parts of the town, and the segregation wall that borders Idna to the north and the west.  There are currently 40 homes in Idna with demolition orders.