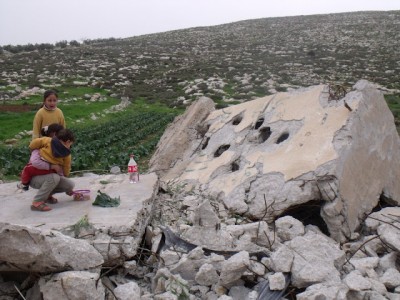 Idhna has suffered considerably since the Israeli occupation, particularly due to the construction of the segregation wall and some 3,000  dunums of land which has been stolen since the second Intifada. Idhna is surrounded by the Israeli settlements of Adora and Telem to the northeast, a bypass road that runs through the northern parts of the town, and the segregation wall that borders Idhna to the north and the west.

According to municipal officials, twenty water sources have been isolated or destroyed in Idhna.

Ahmed Jeyowi spent three years in prison after his involvement in the Intifada resisting illegal Israeli occupation in Idhna. He has since been blacklisted and is not allowed a permit to work in Israel, and so he is expected to live from what he can cultivate from his land, which is now destroyed by the Israeli military.

Ahmed owned two houses before 1988,  when Israeli forces demolished his first home. His second home was demolished last month when around 50 Israeli soldiers stormed the house at 6 AM whilst Ahmed was drinking tea and preparing to work his land. The soldiers forced Ahmed’s wife and six children from their beds and gave the family no time to salvage their possessions before they demolished their home.

Ahmed has since been forced to send his wife and children to live with other family members whilst he lives on the ruined site which once was his home, now replaced by a tent provided by the Red Cross. The tent is far from withstanding the cold weather conditions, especially as it is forcasted to snow at end of this week. Ahmed is left with no heating or lighting, no gas, no toilet, and insufficient bedding. 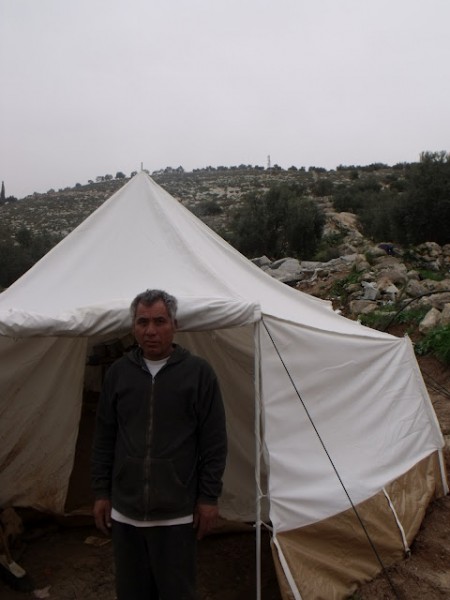 When presence is resistance - Click here for more photos

Everything the family now owns fits into a small compartment of the tent. Due to the imposed water limitations and the demolishing of two local wells, Ahmed is forced to visit the ruins of the wells in the middle of the night to collect his water. One year ago Israel issued Ahmed with an order to either demolish his home, or be sent a bill for the procedure. He had taken the issue to Israeli court but the house was demolished before a decision was reached.

Israel began demolishing houses in Idhna in 1967, and it is thought that at least twenty homes were demolished following the second Intifada. Ahmed estimates that by 2010 some twenty wells had been destroyed in the town. Most recent was a functional ancient Roman well of which the municipality had the lease. Furthermore, waste water from neighboring settlements has polluted what is left of Idhna’s water supply. The water is needed both agriculturally and domestically.

A number of agricultural roads have been closed or destroyed in Idhna, making the harvest of crops difficult. Olive trees have been uprooted and various field crops and grazing lands have been destroyed. In terms of education, restrictions on mobility has made reaching schools difficult. Students are forced to travel an average of six kilometers to get to their schools.

Idhna currently has forty houses with demolition orders placed on them. These families will undoubtedly be greeted with the same call at 6 AM and left with only a tent to shelter them from the weather. Ahmed is now seeking a gas heater and a weather worthy tent. He is afraid to leave the ruined site of his home in case Israel confiscates his land.